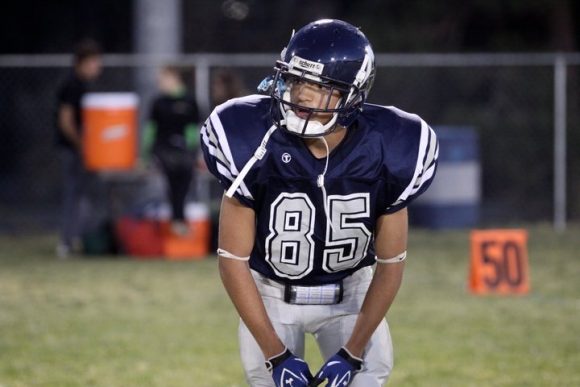 Carnes preparing for the snap while playing at Air Academy High School. (Courtesy of James Carnes)

James Carnes was born on Super Bowl Sunday 27 years ago, and to say football is in his blood would be an understatement. Soon after his high school playing days, he hung up his cleats and nearly ten arduous years later, he seeks a comeback at the University of Colorado.

Carnes graduated from Air Academy High School in Colorado Springs in 2011 where he did just about everything for the Kadets football team. In three years at the varsity level, he saw time at wide receiver, defensive back and was a special teams threat for Air Academy. 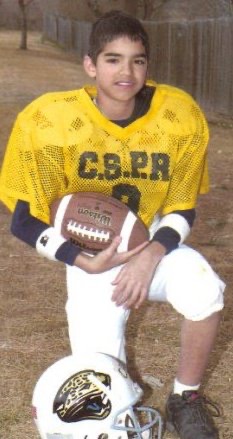 It wasn’t always easy for Carnes, though. He entered high school hovering around 90 pounds and not much over 5 feet. Discouraged, he spent his freshman year playing baseball.

“Everybody was telling me, ‘Oh, you’re not big enough to play football, you’re not all this stuff,’ so I played baseball my freshman year,” he said. “I hated being away from the game (football) and so what happened was my sophomore year I was like, I’m going to go out and play receiver. I was a quarterback all the way growing up in Pee Wee and everything. I always had the best arm out of the kids but I just wasn’t very big, so my sophomore year I decided to switch to wide receiver.”

The Kadets won just one game his junior year and went winless his senior year, but Carnes dedicated himself to the weight room and was able to reach 140 pounds. His love for football was certain but it was unfortunately at the sacrifice of academics. His grades yielded a couple offers to play junior college football out-of-state, but with no scholarship money given at that level, it was not financially feasible.

Carnes decided to stay home, working odd jobs and keeping the aim of college in mind. The year following high school he played for a local semi-pro team — the Colorado Springs Cyclones — and played with a slew of former NFL and collegiate players including CU’s former tailback, Bobby Purify.

“(It was) great competition, I learned a ton about the game,” he remembered. “The coaches were really experienced and so that one season I got way bigger.”

His hard work paid off and Carnes received another JUCO offer from Feather River College in Quincy, California. But just as he experienced a year earlier, the financial drain was simply too much. 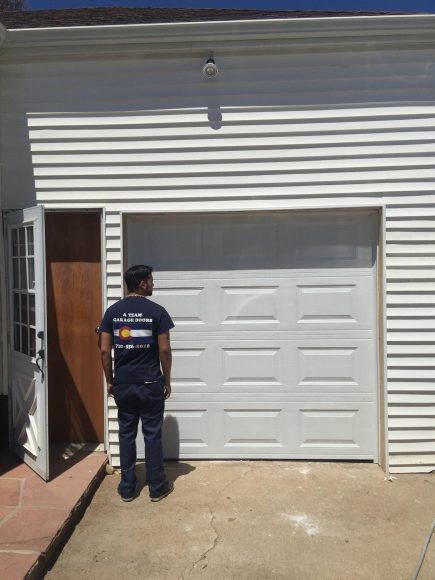 “I went out there and visited (and) I was like, this is what I want to do; I want to play two years here and then hopefully transfer somewhere,” Carnes said. “And then again, we went through all the price of it. California is expensive. You have to pay your own rent if you play junior college football. So again, it just didn’t seem like something I could have done.”

The repeated defeat took a hit on Carnes.

“When I wasn’t able to do that, I was really depressed for a couple years,” Carnes said. “I didn’t do anything because I felt like that was my shot and I had blown it.”

It wasn’t until 2016 when his drive to give college another shot resurfaced. For someone who struggled with academics in high school, Carnes set his sights on CU Boulder. He packed his bags and his life was seemingly on the rise. 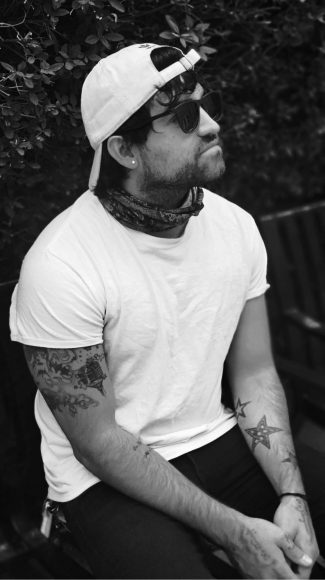 “When I decided I wanted to go to CU, I just moved out here to Boulder immediately,” Carnes said. “…I hadn’t gotten accepted yet so I went out and I just moved here and I was just like, ‘I need to get a job.’ The only thing that was really hiring anybody was janitors. I wanted to get to know the campus and everything and I just worked as a janitor mainly at Norlin Library and kind of all over campus. I even cleaned some of the football coaches’ offices.”

Outside of work, he improved his academics at Front Range Community College. With renewed hope, he applied to CU but was denied — three times. Carnes was forced to shift gears and found success at CSU Pueblo, obtaining a 3.5 GPA in 2017.

Although he was staying busy, Carnes felt stagnant. He struggled with self-doubt after hitting so many roadblocks and turned to drugs and alcohol.

“During that time of trying to get into CU, it was difficult because a lot of people didn’t really understand why I wanted to be here,” Carnes said. “It was like, ‘Oh you’re getting older, why do you want to do this?’ I felt like I was just going through the motions and I struggled with alcohol… If I wasn’t in school, I was partying and that kind of just helps with that void of feeling that uncertainty of life.”

Despite his personal struggles, Carnes was finally accepted into CU in 2018 and sought help at the CU Collegiate Recovery Center.

“That’s the main place that helped me turn my life around,” Carnes said. “I was able to get involved with helping other students that might be struggling. It doesn’t even have to be substance abuse, it can be anything. They welcome anybody to come there and it also helped me get involved more in Boulder.”

His passion for football remained and he attempted to walk-on at CU last fall. Former head coach Mel Tucker’s team unfortunately didn’t have room for Carnes and he was told to try again in the spring. Tucker and much of his staff departed Boulder in February and Carnes was left in limbo when the coronavirus pandemic hit.

“I was initially devastated because I felt like I had a pretty good tryout,” Carnes said. “But when I was told there just wasn’t much room for more receivers and to come back in the spring, I just knew I had to just keep working and get better. Now, I’ve been almost doing two-a-days.”

Currently, Carnes hopes to walk-on in the spring, but he said he’s also considering getting involved one day on the student coaching side. Carnes added that he would be grateful for the opportunity to play at Colorado and wants to prove his maturity and dedication to football.

Regardless of what the future holds, Carnes remains optimistic and tells others to never give up on yourself.

“It’s never too late to go after a dream that you have,” Carnes said. “No matter what held you down or whatever, no matter what’s happened in the past, you can always start fresh today. Even though I’m older, I’m still going after a dream I’ve had since I was a kid and hopefully I’ll make it.”