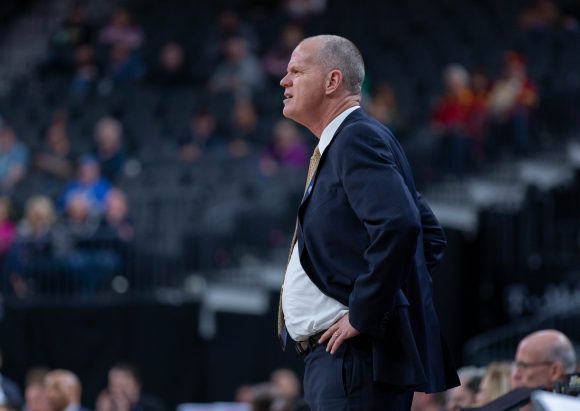 Buffs head coach Tad Boyle looks on with anger and frustration as the seconds tick by during the second half of play. March 11, 2020 (Casey Paul / CU Independent)

“I’m incredibly disappointed for our student-athletes who won’t be able to participate this fall,” George said. “…The first priority is that we look at the health and safety of the student-athlete. It was a difficult decision, but it was the right decision.”

Colorado football will now have to wait a little longer to begin the Karl Dorrell era. Dorrell, who was hired in February to be CU’s 3rd head coach in as many seasons, didn’t hold a single spring practice due to COVID-19 and was set to begin preseason camp on August 17.

“There was a level of disappointment when I spoke with the team yesterday afternoon,” Dorrell said. “I would say it affected not only the team, but it affects our coaches… I’ve been coaching every fall for 33 years straight and this will be a fall of no competition.”

Dorrell may still still remain busy this fall as George hinted at the possibility of “spring ball in the fall.” The proposal may become more feasible as CU athletes have had zero positive COVID-19 tests in the past three weeks. Dorrell said he was “very proud” of his team’s ability to follow coronavirus safety measures.

Although Dorrell was a proponent of play this fall, he understood why the eventual postponement was made.

CU men’s basketball coach Tad Boyle was a bit more blunt with his thoughts on the Pac-12’s resolution. His t-shirt worthy reaction “shock and disbelief” trailed little admiration towards the conference. Much to Boyle’s dismay, Pac-12 basketball coaches were given no input on the decision.

Boyle added that he believed each sport should have been looked at individually and with basketball being mostly a winter sport, he said the decision was premature.

“We didn’t really have until maybe the day before, we heard some rumors and chatter about it, but we hadn’t heard anything from the Pac-12 that this might include us,” Payne said. “We had been plugging along best we can as if things were pretty normal for basketball, as normal as it can be in these current times. I was surprised and we have to create a new plan.”

CU volleyball head coach Jesse Mahoney said that although volleyball sees reduced physical contact compared to other sports, the danger of traveling for games was another hurdle. Likewise, Mahoney said a potential full spring season would be “more meaningful” to his players than an abbreviated fall campaign.

The next step for most CU sports is creating a blueprint for the fall. For women’s soccer, head coach Danny Sanchez said he is awaiting guidance from the Pac-12 on what practice can look like.

“Obviously we can’t play in competitions which is disappointing, but we could still get a lot of work done until that Thanksgiving time,” Sanchez said. “I think we’re still waiting for a little bit of guidance from that end but I think they’re (players) are just ready to go.”

Pac-12 fall football may come back, but questions still...