“We’re here because we have to be”: Workforce on Pearl Street struggles with staying safe and making ends meet 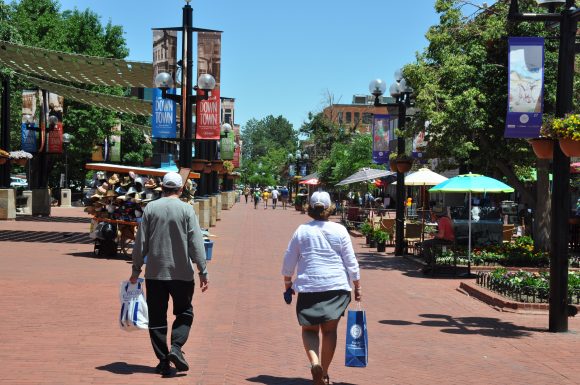 Tourists walk down Pearl Street after shopping in local shops that are starting to reopen. July 1, 2020 (Henry Larson/CU Independent).

On a hot Wednesday, dozens of locals and visitors strolled through Pearl Street, ducked into souvenir shops and stopped at outdoor dining establishments. While not nearly as busy as prior years, the center of Boulder’s business and cultural scene looks a lot different now than it did just a few months ago.

Anabella Rohrbaugh is a University of Colorado Boulder sophomore and a busser at Ozo Coffee on Pearl Street. She worked at the coffee shop in the early months of the pandemic.

“It was still pretty normal, but there was a weird atmosphere where everyone was really unsure of what was going on,” Rohrbaugh said.

After months of closures and uncertainty, many local businesses have started to reopen, even as COVID-19 cases rise across the state.

Now, it’s the height of the tourism season, a critical time for many businesses as they depend on out-of-state visitors for much of their yearly revenue. In fact, in a 2013 study, the Boulder Convention and Visitors Bureau found that tourism brought almost $420 million to the city.

Dan Shaffer, the owner of Pizza Colóre, is one of many business owners who relies on the Hawaiian tours for his summer sales.

“The summertime is when the tourists come in, and that’s where the … money’s at,” he said.

Shaffer estimated that his business used to split its revenue between local office workers and tourists “50-50,” but now tourists occupy about 90% of Pizza Colóre’s sales.

This presents a problem for local restaurants, Shaffer explained. Because so many businesses in the area have switched to a work-from-home model, he isn’t getting very many of his regulars in the restaurant.

“We’re almost working harder with half the amount of sales,” he said.

Many local restaurants are faced with an impossible decision as they struggle to pay their bills and keep people safe: is it worth it to stay open?

“There’s no alternative (to opening), right? Landlords aren’t giving us a break because the banks aren’t giving landlords a break,” said Peter Jones, general manager of Trident Bookstore and Cafe.

“It’s a blessing and a curse,” Jones explained. “Under the new COVID guidelines, there’s a lot more work that we have to do.”

As she prepares to move back to Colorado for the fall semester, Rohrbaugh wants customers to know why employees are still working right now.

“Regardless of whether or not we like our job, at the end of the day, we’re here during a pandemic because we have to be.”