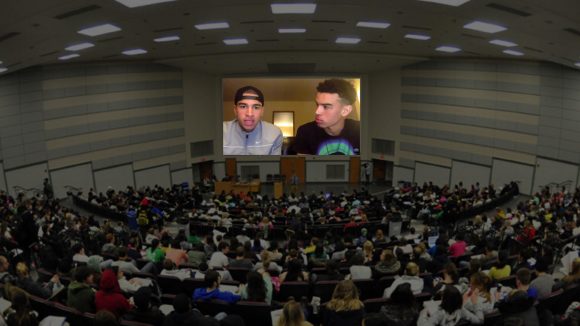 For all you Boulderites out there, Colorado Buffaloes men’s basketball junior guard Maddox Daniels is about to become your favorite player. Daniels’ interests span far past the basketball court with him and his brother Mason exploring health, wellness and spirituality in their YouTube channel, “The Daniels Twins.”

As of April 28, the twins have logged 50 videos and accumulated 236 subscribers on YouTube. Topics include mindfulness, workout logs and recommendations, healthy options when grocery shopping, a four-part series on “The Matrix” and yoga.

Before transferring to CU for his junior year, Maddox began sharing his health and wellness journey on YouTube early in his sophomore year at Florida SouthWestern State Junior College. Maddox was able to bring his brother on board after winter break and “The Daniels Twins” was born.

“It was more of just a self-exploration type thing,” Maddox said. “Breaking through a lot of my own fears like what people thought of me (and) stuff like that and just starting (the channel) because it was something that I guess people didn’t think a basketball player should do.”

Being a high-level athlete comes with people’s expectations of what you should be. Maddox has fittingly broken past those through sharing his wisdom.

Mason wants to make it clear that the channel was never created for attention or “clout,” as he puts it. Both brothers agreed the channel has simply been an outlet for them to share their experiences and how they’ve grown from them.

“It started as an exploratory thing,” Mason said. “It started as a form of expression and like another way for us to continue to break out of the norm, break out of what was considered acceptable, something new for us to explore. We found that the more new things we dove into, the more growth experiences we’ve had.”

Maddox said that while his goal has been to help other people, the channel has helped him just as much. Realizing that everyone is subject to life’s adversity has helped him develop and overcome his own challenges.

“I was going through a lot of things personally that weren’t always fun,” Maddox said. “There were people, there’s confusion, and I came to realize that other people go through this stuff too and me wanting to go out and actually to share and help people with that, actually helped myself.”

A difficult part of improving your health and wellness is sorting through what really is beneficial to your body. Mason played basketball alongside Maddox at Florida SouthWestern and found that many people were confused on positive strategies when it came to physical health.

“I would see a lot of people struggling with their bodies and their health and it just brought up a lot of questions for me,” Mason said. “How can I—how can we—be better in this way? I started to really experiment and dive into studying and how to take care of the body the right way. Micronutrients, macronutrients, sleep, everything that goes into it.”

Another important part of the channel is ensuring the content is “authentic” and “come(s) about naturally.” Recently, spirituality has been in the front of Maddox’s mind. He believes spirituality is an important facet of our lives, but there’s often a stigma around discussing it.

Maddox believes improving one’s spirituality is something everybody should try, even if you’re not an athlete constantly working to improve your body.

Although Maddox believes his words transcend the athlete, his teammates have been another group that he’s connected with.

“It’s definitely cool to see how open and awesome my teammates are to everything that I talk about beyond basketball,” Maddox said. “(There are) a lot of accepting and open-minded guys around me.”

With just over a year under their belts, Maddox and Mason have already received gratitude from their followers and were even asked to speak in a class at Penn State University. The twins have never sought approval through the publication of their videos, but recognize that exposure is necessary to spread their message.

As for the future of the channel, Maddox and Mason want to stay the course while growing their community and putting out authentic content.

“We’re not looking for recognition or anything,” Mason said. “It just feels great for us to be able to share our experiences, our outlook, our perspective, in a positive way and allow people to take that and try different things and create a conversation, create a community.”

“We want the channel to grow as much as possible and from health to me sharing my stuff with basketball and Mason sharing everything he’s working on,” Maddox said. “We really see no limits to what we can share and what we can put out through the channel.”

You can check out their channel here.