A look back: Top 5 CU football games of the decade 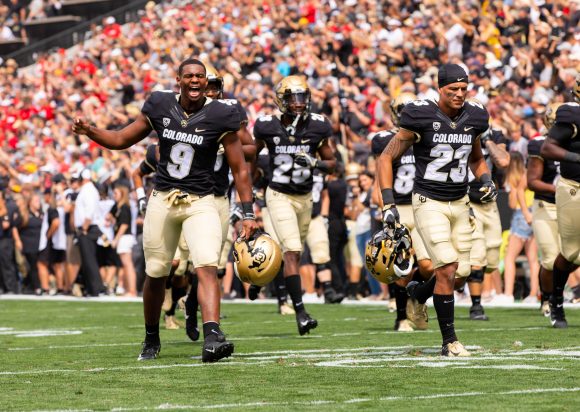 Tailend graduate student Jalen Harris shows how pumped he is for the game against the Nebraska Cornhuskers. Sep. 7, 2019 (Casey Paul / CU Independent)

With COVID-19 upending the sports world and canceling future events, the CU Independent decided to look back on some of the Buffs’ most memorable games of the decade. Of course, this list is subjective and you may not see your favorite game on here, but all of the matchups mentioned deserve a spot on this countdown.

Colorado’s run game proved vital in their late-season match up with No. 22 Washington State on this brisk Saturday afternoon in Boulder. CU ran for 258 yards on 59 carries to put themselves in poll position to win the Pac-12 South the following week versus Utah.

After going into the half down 17-14, the Buffs defense was able to limit the Cougars offense to seven points in the third and zero in the fourth while the Buffs offense was able to put up 24 points in a resilient second half. Junior tailback Philip Lindsay carried the ball 31 times for 144 yards and two touchdowns including the day’s opening score. Quarterback Sefo Liufau threw for 345 yards and carried the ball 23 times for three touchdowns in a signature performance from the Buffs senior QB. It was the second time a CU quarterback has thrown for 300 yards and rushed for 100, the other being Steven Montez at Oregon earlier in 2016.

CU was able to outgain Washington State’s offense 603 yards to 462 and went 13 for 21 on third-down conversions. The Cougars went 4 of 15 on third down.

For the first time in a decade, the Buffs became bowl eligible with their defeat of the Stanford Cardinal in Palo Alto. Colorado forced four turnovers including two Tedric Thompson interceptions and held Stanford star running back Christian McCaffrey to 92 yards on 21 carries on their way to the victory.

The game was sloppy throughout and neither team eclipsed 200 yards passing, but CU rushed for 224 on 49 carries. It was Stanford’s first game since its 2015 opener at Northwestern that they failed to score a touchdown. It was McCaffrey’s third game in a row that he failed to reach 100 yards rushing, the longest such streak of his career. Stanford lost three games in 2016, all when McCaffrey did not reach the 100-yard mark. Stanford only had 263 total yards.

Stanford went on to go 6-0 including a bowl victory after the loss to CU finishing the season 10-3 and No. 12 in the AP poll. 2016 was the only season this decade the Buffs finished with more than 6 wins and bowl eligibility.

In a stunner, CU defeated Nebraska 34-31 getting two wins in as many years against the Buff’s classic rivals. Steven Montez threw for 375 yards and two scores while KD Nixon had 6 receptions for 148 yards and a touchdown.

Nebraska took an early lead in the game and by the half were up 17-0, limiting the Buffs offense to 74 total first-half yards. CU punted six times and threw an interception on the first seven drives. The Buffs offense got started with an 8 play 64-yard touchdown drive and went on to score a touchdown on three consecutive drives. KD Nixon caught a 96-yard touchdown from Steven Montez and Jared Mangham had two running touchdowns on those three drives.

The two teams continued to trade off scores and with 3:33 left in the fourth, the score was 31-24 Cornhuskers. CU got the ball back and went on a 10 play 70-yard drive to tie the game capped off by a 26-yard touchdown pass to Tony Brown in the corner of the endzone.

The game went to overtime and the Buffs got the ball first, unable to score a touchdown, kicker James Stefanou converted a 34-yard field goal. Nebraska had a chance to win the game with a touchdown but lost four yards overall on their first three plays and were forced to attempt a 48-yard field goal to force another overtime. The field goal went way right and the win went to CU, making it two years in a row beating their rivals.

CU was able to emerge from a sea of red with a victory in their first meeting with former Big-12 rival Nebraska since 2010. Steven Montez threw for 351 yards and three touchdowns and Laviska Shenault Jr. was able to build on his incredible start to the 2018 season with a pair of touchdowns and 177 yards receiving.

The game got off to a fast start with a touchdown pass to Jay MacIntyre, a touchdown run from Laviska Shenault Jr., and all of a sudden, CU found themselves up two touchdowns within 10 minutes of the first quarter. Nebraska responded with three unanswered touchdowns and a James Stefanou field goal made the score 21-17 at the half.

Stefanou was once again able to cut down the Nebraska lead to one by converting a 35-yard field goal on the Buffs opening drive of the second half. Nebraska responded and extended their lead to eight with a 57-yard touchdown to Adrian Martinez. Jay MacIntyre collected his second touchdown pass of the day to make the score 28-27 Nebraska with 1:24 left in the third.

The fourth quarter had three missed field goals, two by Nebraska and one by CU, and the score stayed at 28-27. CU got the ball back with 2:15 and marched down 77 yards in 1:17. Steven Montez dropped back from the Nebraska 40 and dropped a dime to Laviska Shenault Jr. to take a five-point lead with one-minute remaining.

Nebraska had a chance to win the game moving the ball down to the CU 21-yard line with 0:23 left in the fourth quarter but were unable to convert a touchdown. It was CU’s first win at Nebraska in their last four tries. The past 12 games between the two teams have seen a 6-6 split in wins. This was CU’s only away win of the season.

2016 saw the Buff’s most successful season of the decade. A ten-win season commonly known as “the rise” amongst seniors saw its fruition in the Buffs 27-22 win over Utah in the final game of the season that saw the Buffs clinch the Pac-12 South for the first time since joining the conference in 2011. Coming into the season the Buffs had gone a dismal 5-40 in the Pac-12 in their prior five seasons. The win saw CU make their first conference title game since 2005 in a seven-win season under Gary Barnett.

Coming into the game the Buffs controlled their own destiny, a win and they would go on to the Pac-12 title against Washington. A loss would mean USC would take the spot representing the South division of the conference.

The Buffs defense was stellar in the win, taking the ball away from Utah four times and sacking Utah three times. Utah quarterback Troy Williams had an abysmal evening passing the ball going 13-40 for 160 yards, a touchdown and two interceptions. Chidobe Awuzie terrorized Utah all night with 8 tackles, a fumble recovery, a sack and a pass defended.

Devin Ross and Shay Fields combined for 16 receptions and 172 yards. Fields also had a touchdown.

The win came in front of Folsom Field’s first football sellout since 2008.

Laviska Shenault Jr. had the first 200-yard game of his career in this stomping of CU’s in-state rivals. Shenault had an 89-yard touchdown that was the second-longest of the decade behind KD Nixon’s 96-yard touchdown against Nebraska.

The first signature win for the Buffs this decade occurred at Autzen stadium in Oregon. Steven Montez threw for 333 yards and ran for an additional 135. He totaled four touchdowns in the win. Devin Ross and 7 receptions for 153 yards and a touchdown and Bryce Bobo had one of the catches of the year to give CU the lead they would go on to win with. Oregon had a disappointing season after this going 2-6 after the loss to CU finishing the season 4-8 (2-7).

Tony Jones had the longest run play of the decade with an 84-yard score. The win in Pullman prevented CU from a winless season, went on to go 1-11. Jones finished the game with 4 carries, 104 yards and a touchdown. Colorado went ahead with 9 seconds left in the game.