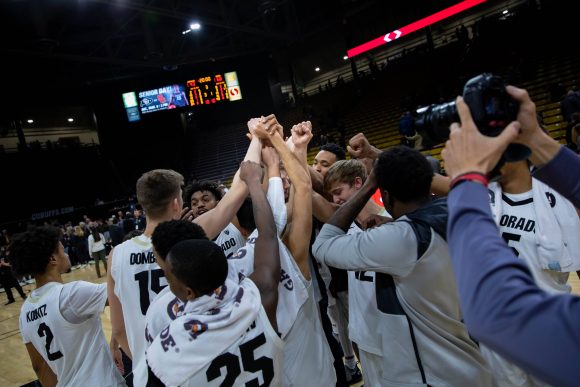 This past month has been tough for all of us. No matter your profession or what your life revolves around, it has been a struggle. For college basketball fans, last week would have been the National Championship game. In a perfect world, this game would have occurred. But the world is not as such. In a perfect, absolutely flawless, heaven-like world, the Colorado Buffaloes win this game. We’ve all had plenty of time to daydream recently, so let’s entertain this hypothetical game a bit further.

They did it. The University of Colorado Buffaloes men’s basketball team has won a National Championship. It took a miracle, but they did it. In the waning seconds of overtime, sophomore forward Evan Battey drained a half-court buzzer-beater to knock off the Duke Blue Devils, 73-72.

“It was absolutely unreal,” Battey said after the game. “I can’t believe what just happened. I’m so happy for Buff nation and for our team that has worked so hard to get here.”

In front of 70,234 fans at the Mercedes-Benz Superdome in Atlanta, Georgia, the Buffs did the impossible. Head coach Tad Boyle couldn’t contain his excitement postgame.

“The fact of the matter is this victory was nice, but this after-party is going to be even better,” Boyle shouted while being mobbed by fans at half-court. “I was pretty confident that we would win and took the liberty of scouting out all the best clubs in Atlanta. All of Buff nation is invited and we’re going to enjoy this one for a while.”

Junior guard McKinley Wright IV led the charge for the Buffaloes with 34 points and 13 assists. The Minnesota native orchestrated an offensive attack that put up 40 points in the first half. Colorado led by three after 20 minutes.

“They (Wright and Bey) were just about unstoppable tonight,” Boyle said. “Whether it was rebounding, finding the open man or coming up big in a clutch spot, we knew we could count on them to get the job done.”

The game remained tightly contested in the second half. Duke and CU traded blows with six lead changes. With just over a minute left in regulation, sophomore guard/forward D’Shawn Schwartz found an open lane to tie the game at 67. Defense from both teams hunkered down in the final minute to push the game into overtime.

For the second year in a row and ninth time overall, it would take another five minutes to crown a champion. Duke applied the pressure early in the period with a 3-pointer, followed by a dunk on their next possession to give the Blue Devils all the momentum.

A pair of free throws from Wright shrunk the deficit to three and Colorado’s defense would keep the Blue Devils scoreless for the rest of overtime. With two minutes remaining, Bey was fouled and made one of two free throws.

Then the magic happened. Following a controversial Duke turnover that needed a review to determine possession, Colorado would get the ball back with two seconds remaining.

“All the pressure was on at the point,” Boyle said. “We drew up a play and crossed our fingers that it would work and sure enough, it did.”

Not many people would consider Battey a long-range threat and that’s exactly why Boyle’s play worked. Schwartz inbounded the ball for the final play and he found a streaking Battey on the opposite sideline. Battey caught the chest-high pass and threw up a prayer that was answered.

The Buffs were national champions, in a perfect world.