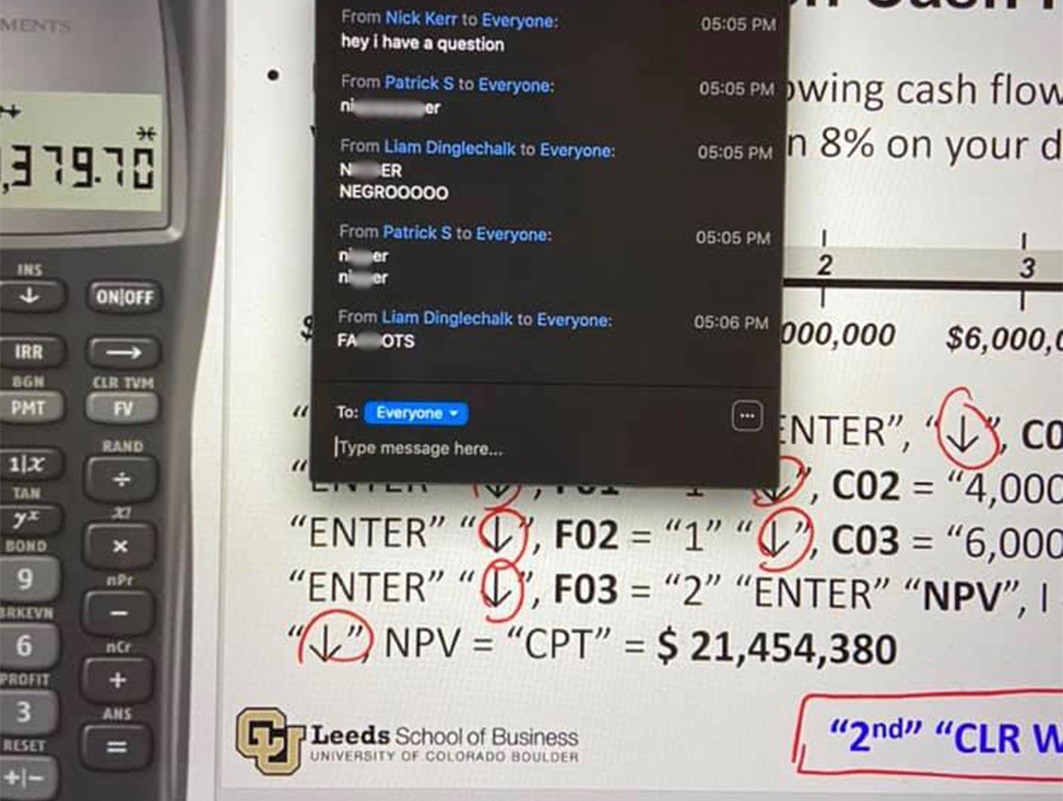 A screenshot of a University of Colorado Boulder business class held via Zoom on Wednesday, April 1. Several accounts from outside the classroom posted racist and homophobic slurs. This screenshot has been edited due to its explicit content. (Courtesy of Audrea Fryar)

Editor’s note: The CU Independent does not usually alter images. However, due to the explicit and possibly triggering content of the featured image above, some aspects have been obscured.

As the novel coronavirus pushes universities online, a new window has been opened for discriminatory attacks. At the University of Colorado Boulder, students have reported in recent days of online classes being “Zoom-bombed” by unknown hijackers who post and say racist, homophobic and islamophobic slurs.

For students of color, it’s more serious than just an annoying prank.

“It started with pornographic images being displayed by users with fake names,” said Isaiah Chavous, whose Wednesday business lecture was hacked by at least four unknown accounts. “All of these images displayed black or brown individuals which is no accident or mistake. It’s a sexual stereotype that has been used for many generations to not only devalue but to sexually degrade people of color.”

The professor, according to Chavous, ended the class before sending a new Zoom link. But only moments after joining, unknown accounts returned and resumed posting pornographic material. It wasn’t long after that the professor ended the class again.

Chavous said while some in the class may have just experienced a disruption, for others the attacks cut deep.

‘The university has to get involved’

Donovan Bright, a CU Boulder junior and CUSG multicultural liaison, said that student leaders have been made aware of at least seven different incidents of online classes that have been hijacked with discriminatory and offensive content since Monday.

Bright said most students have reported hacks taking place roughly midway through or towards the end of their classes. He and others suspect the hacks could be from CU students as only those with a Zoom link and/or a meeting ID can access a class. He said the repeated use of the N-word and pornography may show a pattern that these are the same people behind the multiple hacks.

The FBI has warned in recent days of rampant Zoom hacks plaguing the country, from online classes to business meetings.

According to CU Boulder Chief Spokesperson Melanie Parra, the university’s Office of Information Technology (OIT) is already investigating a Zoom hack that occurred during a Tuesday endocrinology class. OIT has sent faculty instructions for how to prevent future hijacks by making Zoom calls private with a password.

But Bright said students need to see more action from the university.

“These are cyberattacks and it is something the university has to get involved in,” Bright said. “Whether that means making a team to investigate these incidents outside of (the Office of Institutional Equity and Compliance), working with the FBI or some other department, these (incidents) are starting to happen more and mainly to students of color.”

“Whether it’s physical or virtual, I think that we need to remind ourselves that it’s not okay and in order for us to better ourselves we have to make awareness about it.”

Though he and other CUSG members have reached out to administrators via email, Bright said no one has yet to receive an official response addressing the incidents.

“The main demand right now is making sure the university is aware and that they are doing something about it,” Bright said. He is urging students and faculty to report these incidents when they occur and to document as much evidence as possible by screenshotting and recording the hijacks.

The CU Independent requested the number of reported cases from the OIT but has yet to receive a response.

Documenting and publishing data on discriminatory attacks was a demand brought to administrators in October after a woman yelled the N-word several times at a black CU student in the Engineering Center. The incident sparked a week of protest and outcry as student organizations, led by CU Boulder’s Black Student Alliance, insisted the university do better when it comes to responding to hate crimes.

Bright said increased reporting and documentation of the ongoing hacks by the university would align with students of color’s goals.

“This ties in very well to what we were fighting for before COVID-19,” Bright said.

He hopes students will continue to take the attacks seriously.

“If you want to see action you have to make noise, you have to contact the right people,” Bright said. “As students of color, … racism, microaggressions are a constant awareness to us every day. Whether it’s physical or virtual, I think that we need to remind ourselves that it’s not okay and in order for us to better ourselves we have to make awareness about it.”

CU Boulder junior Audrea Fryar said if the university can’t get the hacks under control she would prefer to use other methods of completing her online classes such as canvas or even a different video conferencing software.

“(The hacks) make it extremely hard for any student at CU to be successful right now, especially the students of color,” she said.

Fryar, who sat in on the Wednesday business class along with Chavous, said for some it can be easy to laugh off the incident.

“I don’t think they realize how much those images and those words resonate with students of color,” Fryar said. “Professors will say, ‘Hey let’s get off this (call) and onto the next one,’ but it’s hard to keep learning when you’re sitting in a group chat for a class knowing that there are (people) in there who are targeting you and what you represent.”

She also wishes the university had released a statement when the attacks first began being reported. At the very least she wanted a warning that something could happen.

“There was nothing,” Fryar said. “I think that because it’s cyber it gives (CU) the ability to not address it as seriously as if it were face-to-face on campus. It plays into the bigger picture of what it’s like to encounter a racial issue at a predominately white institution.”

Chavous said CU Boulder at least needs to acknowledge that the hacks are ongoing.

“In this particular case, being that it is online, there are remote tools and protocols that can be taken to at least limit the possibility of people coming into an online learning environment and disrupting it for people of color and the students who are in it as a whole,” he said.

“These attacks are just as harmful, just as hateful, even if it’s masked by an identity that is hidden.”