Opinion: A pandemic is the environmental wake-up call we need 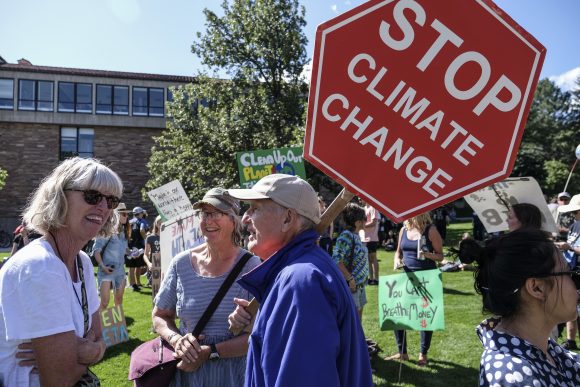 It might be hard to see anything positive in light of the COVID-19 pandemic that keeps most of us in our homes, but even in times like these, there is still good news to come out of weeks of quarantine and business shutdowns.

On March 16, the University of Colorado Boulder suspended all in-person classes, announcing that the rest of the semester will take place through online remote learning. The city of Boulder also announced a stay at home order effective March 25 through April 10. While these ordinances may bring frustration and restlessness, there is proof that in our temporary absence of everyday life, our planet is reaping the benefits.

On average, American college students produce around 640 pounds of waste every year. About 142 pounds of that is food waste, while college campuses alone throw out about 22 million pounds of uneaten food every year. Because of the coronavirus outbreak, college campuses have been forced to shut down or decrease services, including those that run the dining halls. This ultimately means a lot less waste and a big positive for the environment.

“If anyone needed proof that humans are in control of climate change, this is it.”

Researchers in New York found that carbon monoxide emissions from cars in the state have fallen by almost 50% and overall emissions of carbon dioxide significantly dropped since New Yorkers were asked to suspend unnecessary travel after the state became an epicenter for the outbreak in the U.S. In China, where COVID-19 initially spread out of Wuhan, carbon emissions decreased as much as 100 million metric tonnes since February. China’s NASA, which is stationed in the Hubei province, also recorded a large drop in overall air pollution starting in December of last year, following strict transportation restrictions. Carbon dioxide concentrations all over the globe drastically fell since COVID-19 was announced as a pandemic, and overall air quality has seen significant improvements.

The spread of COVID-19 has also led to a decrease in the need for coal and oil, as well as a large-scale suspension of air travel, which has resulted in drastically lower emissions. In Italy, where the virus reached its worst outbreak outside of China, the Venice canals are repopulated with fish and the waters are much clearer with boats no longer crowding them.

There is no doubt that there would be a positive correlation in decreasing transportation and increasing air and water quality. Similar environmental improvements occurred in 2008 during the economic crisis since the demand for fossil fuels dramatically declined. But of course, there are environmental downsides to a pandemic, such as an increase in home energy consumption as people who stay at home are streaming videos online even more. There are ways, however, to practice sustainability even while staying at home; simple tasks like turning the lights off when you leave the room, shutting off the water while brushing your teeth or using a reusable bottle instead of stocking up on plastic ones.

Keep in mind that a pandemic is certainly not an analogy to combat global warming. It is important to remember that with what the environment is gaining, real people are losing in their jobs, loved ones, security and freedom to leave their homes. However, the current environmental gains are significant and can lead us to a greener future once the pandemic has passed.

However, these environmental wins may not last forever. In fact, researchers fear that global carbon emissions will spike again as soon as transportation bans and advisories are lifted.

But for now, for all those ordered to stay inside, try considering the environmental benefits we can all gain from social distancing and isolation. If anyone needed proof that humans are in control of climate change, this is it.

Opinion: Sustainability amidst a pandemic is no easy task