Opinion: CU’s plan to improve diversity is just an idea 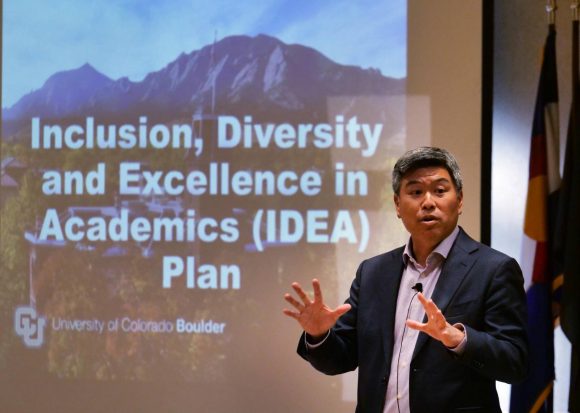 The University of Colorado Boulder’s leaders cite 2015 as the first time it occurred to them to begin efforts toward improving campus diversity and inclusion. After a series of dialogues and workshops with students and faculty, authorship of a plan to move forward began three years later, in 2018. By October 2019, the official Inclusion, Diversity, and Excellence in Academics (IDEA) Plan was published.

The plan ruminates in its brainstorming phase, leading students and faculty to question whether that’s where it will remain. Plagued by vague language and repeated delays, the IDEA plan is an ambiguous roadmap to achieving a more inclusive and equitable campus. While CU’s intentions for improvement may be genuine, its execution leaves much to be desired.

The IDEA Plan constitutes the campus’ only blueprint in history for better supporting minority students and faculty. After five years of working on this plan, there seems to be little return on the investment. It is now March 2020 and CU says the IDEA Plan is in the phase of “continue building partnerships for long-term, iterative growth according to the IDEA Plan’s goals and recommendations.”

CU Boulder Chancellor Philip DiStefano, in an article in CU Boulder Today introducing the IDEA plan, said it is the “product of extensive reflection, focused discussion and dedication to changing our culture at CU Boulder.” When DiStefano says “reflection,” his words are open to interpretation. Is he referring to students of color who have called for CU to provide a more comprehensive support system for minority students on campus? Is he referencing the most recent CU Undergraduate Student Climate Survey results, a survey that has not been administered since 2014 and which produced disappointing results when it came to minority students’ feelings of belonging? By not specifically identifying the reflection from which the IDEA plan is based on, it is hard to see where the plan is headed on a practical level.

Diving into the fifty-one-page IDEA Plan document, the university demonstrates support for increased financial support to underrepresented communities via scholarship programs and the re-evaluation of existing scholarship requirements to receive those.

Information about these financial support goals is dubious and non-committal. It is March 2020 and, since 2015, there haven’t been any new scholarship programs specifically created for minorities.

This language is exceedingly vague: it doesn’t reference any specific programs, specific dates for when we can expect substantive change or even implementation strategies that the “transition working team” plans to carry out.

“As it stands, the IDEA Plan is nothing more than an idea.”

The IDEA Plan document cites strategies that it will use to recruit and retain a more diverse faculty, some of which are expanding and supporting the existing STAR program: a special set of processes that aid academic departments in successfully recruiting those whose work and research will contribute to equal opportunity. Other strategies include supporting cluster-hire programs and promoting hiring practices for bettering diversity.

CU needs to address its poor diversity rates head-on. While it boasted one of its most diverse classes in fall 2019, the university still has a long way to go to be on par with its state-wide demographics.

The IDEA Plan calls for more financial resources and programming for students and to increase financial resources and incentives for improving diversity. Though the IDEA Plan itself addresses the need to recruit from underrepresented communities and lays out a strong commitment to do so, strong commitments without action don’t produce meaningful change. They haven’t for the past five years. In addition, CU fails to include specifics; for example, which communities they plan to shift their recruitment focus to.

Diversifying CU’s incoming pool of applicants is neglected when it comes to recruitment outside of Colorado. According to the New York Times, researchers found in 2017 that in CU’s out-of-state visits, the university was “more likely to visit predominantly white public high schools over non-white schools with similar levels of academic achievement.”

In 2017, it seemed CU strongly preferred the receipt from an out-of-state tuition bill to true racial and ethnic diversity. Objectives to increase financial support for underrepresented communities cannot be reached without major restructuring of recruitment methods and admittance. Unless CU Boulder commits itself to changing their current racial and ethnic composition on campus, neither diversity nor inclusion will exist.

Broad promises and transient objectives pervade this 51-page document. Section 3, page 36, advises, “While the IDEA Plan document serves the entire campus, it does not serve as a specific roadmap for individual departments or units.” Concrete, well-thought-out guidance for departments doesn’t appear in the official IDEA Plan.

As of March 2020, department plans for addressing a lack of diversity haven’t been publicized. When the ODECE was asked, “What current measures are being taken to implement the IDEA Plan?”, they replied, “A transition team has been meeting to provide initial guidance on IDEA Plan implementation.” The ODECE tried to strengthen their position by saying they “accepted” the IDEA Plan as well—as if after five years of work it might’ve been denied.

When pressed on the vagueness of their answers with, “What has been done since last year (Spring 2019) to improve diversity and inclusion at the administrative level?” they added, “Campus continues to implement efforts that promote diversity and inclusion at all levels.” They attempted to bolster that statement with, “A transition team has been meeting to identify next steps in the process of implementing the IDEA Plan.”

Why are the next steps still being identified and not taken?

In multiple instances, the ODECE references a “transition team.” Branding this team as a transition-based operation rather than an implementation-based one reinforces their fickle commitment. In every mention of the transition team, there is no actual insight into their actions for IDEA Plan implementation, regardless of the fact that this is what was explicitly asked. In short, CU’s ODECE cannot withstand the pressure of the truth; adamantly avoiding detailed answers to every question that even probes the IDEA Plan.

In CU’s defense, the CU System Faculty Council committee changed their name at the end of the 2018-19 academic year from the Ethnic and Minority Affairs Committee (EMAC) to the Faculty Council Committee for Racial and Ethnic Equity (CREE). They defend this term by noting that they’ve included both “race” and “ethnicity” to be more inclusive. They also chose the term “equity” to emphasize their commitment to providing “access and opportunity” for students and faculty of color.

This name change wields no true instrumental value; it only embraces a more diplomatic definition of equality. While that intention is worthy, students and faculty aren’t looking for nuances in an institutional label, they are looking for a diverse campus where everyone feels welcome, valued and supported.

According to the ODECE, “additional updates regarding the rollout of activities stemming from the IDEA Plan’s recommendations will be announced in the coming weeks.” This was reported on March 13th, 2020.

The “plan” closes out by stating: “The IDEA Plan concludes with galvanized optimism for our collective forward momentum.” It is going to take a lot more than “galvanized optimism” to reify institutional change.

As it stands, the IDEA Plan is nothing more than an idea.

Vayle Lafehr is a sophomore at the University of Colorado Boulder where she studies neuroscience and philosophy. She is the head opinion editor and a staff writer for the CU Independent. Vayle enjoys calling attention to a variety of issues that affect CU students.

Opinion: It’s time for the United States to move...