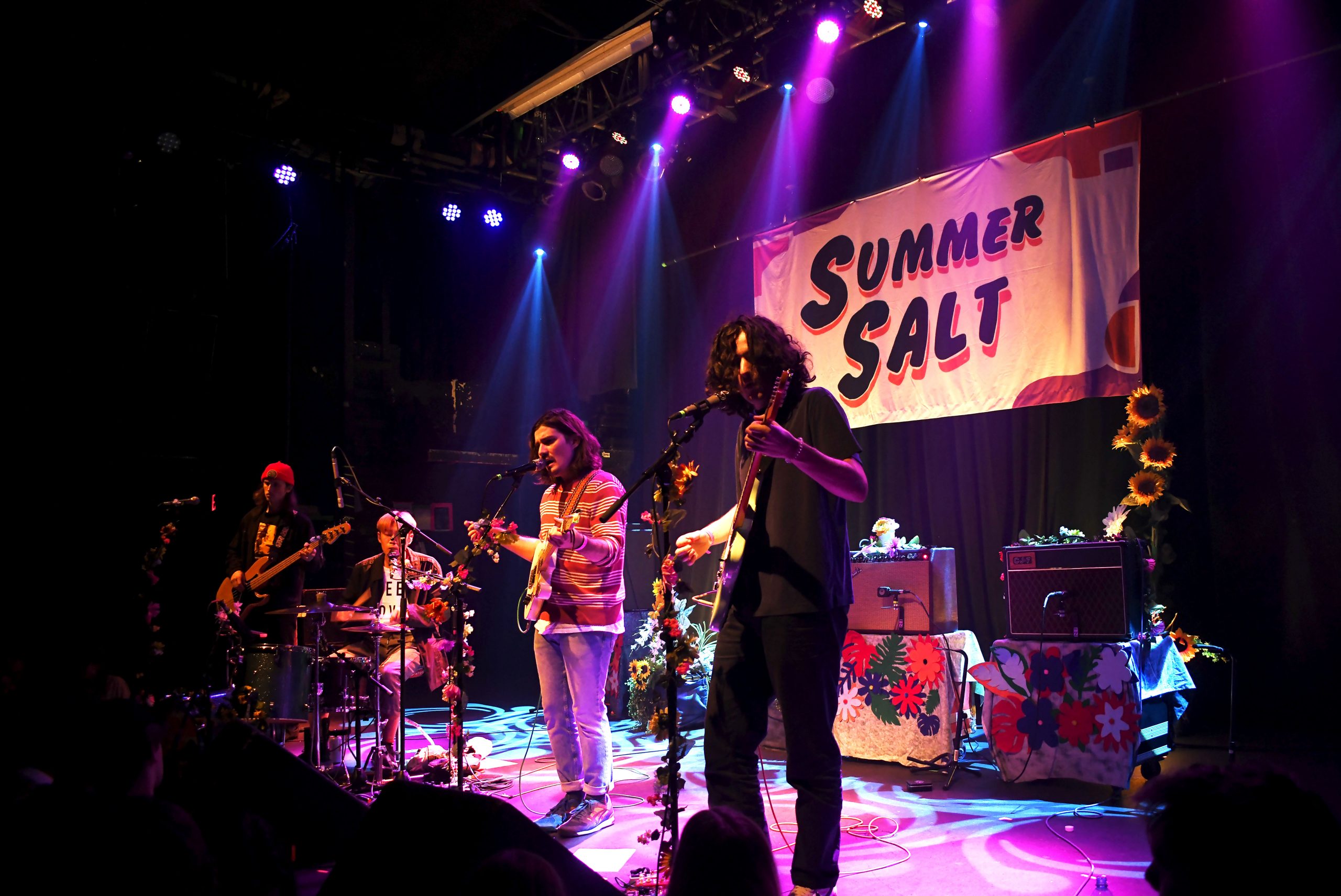 Summer Salt rocks out in front of their flower-covered backdrop at the Fox Theatre. March 13, 2020. (Benny Titelbaum/CU Independent)

A national pandemic wasn’t enough to stop Summer Salt’s flower-power show in Boulder’s Fox Theatre Thursday night. The indie surf-rock sunshine collective took it upon themselves to help the Boulder audience let loose and forget about the perceived coronavirus chaos happening outside the theater’s doors. Still, the concerns of COVID-19 and its ability to spread through large crowds has forced the group to make Thursday’s show its last, at least for now. Summer Salt announced the rest of their 2020 tour has been postponed until further notice.

Thursday night marked the Austin based crew’s first performance in Boulder. After calling attention to the grim circumstances of 2020 thus far, the band insisted that the crowd “open up the pit.” As the troupe sounded off their coral reef rock track “Summer Salt,” which released in 2015, the floor filled with lighthearted moshing bodies and ear to ear grins.

Terry called upon the audience once again to aid him in belting out a fan favorite titled “Revvin’ My CJ7.” The purple and yellow flower covered mic-stands and drum set combined with vibrant magenta spotlights shined down on the Austin posse. It provided flawless visuals for the soothing Bossa Nova inspired track which served as an ode to Terry’s father.

Midway through their set, the intimate jazzy track “One Last Time” yielded slow dancing throughout the crowd. The somber slow-paced rhythms accentuated Terry’s velvety vocals and assisted in cementing a sincere connection to the audience. The flock of fans mouthed “alone again on valentine” while swaying along with the lonesome heartfelt narrative. Following the change of pace, Terry revealed the other guitarist in the group, Anthony Barnett, happened to be his cousin. With both of their sisters in attendance, Terry stressed the importance of family and being together during the hard times 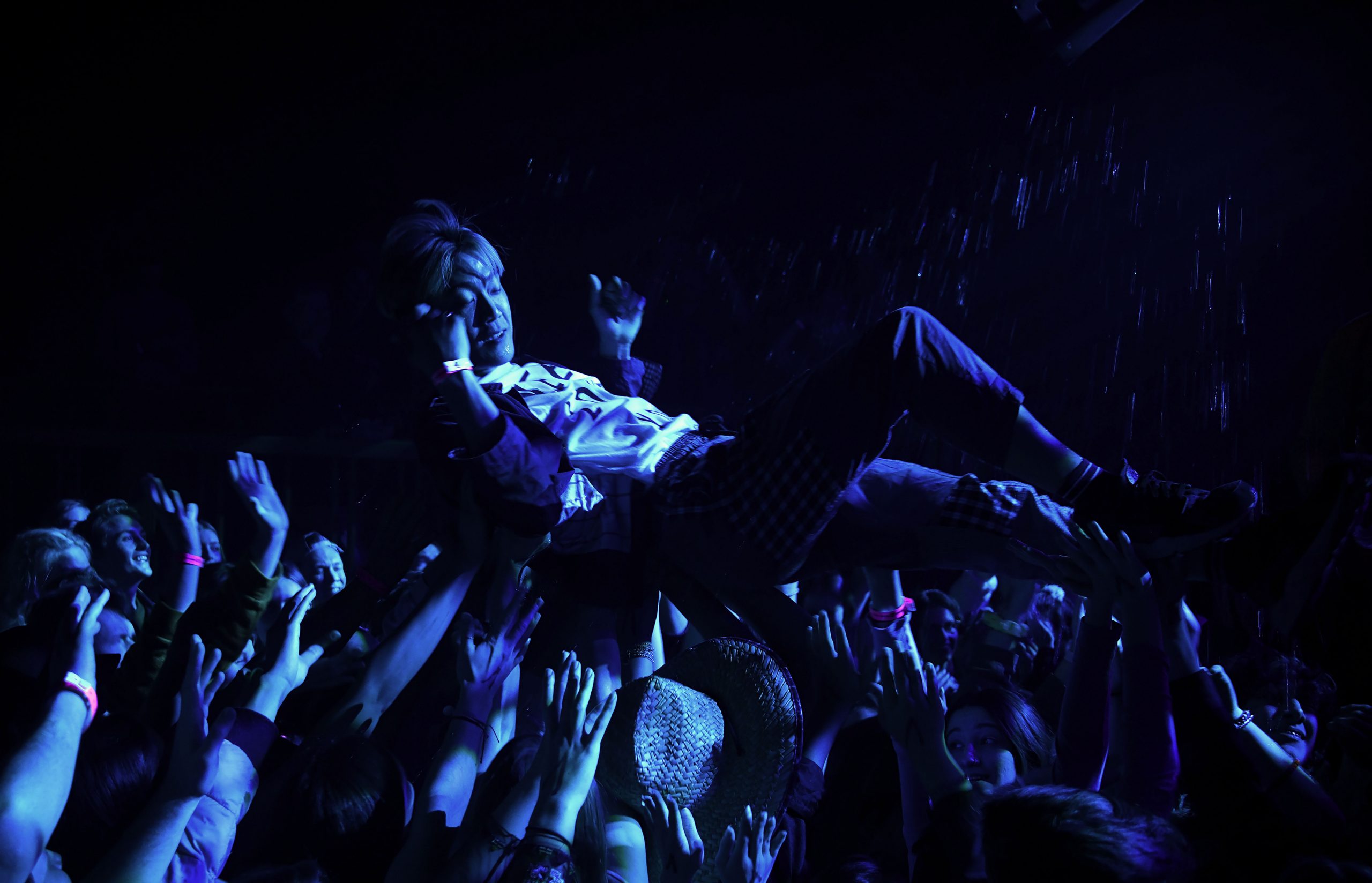 For their closer, Summer Salt echoed off their upbeat 2015 title track “Going Native.” Members of the opening indie groups Okey Dokey and Breakup Shoes, as well as family and friends of the band, crowded the stage while the group blasted the venue with tireless energy and infectious grooves. Towards the midpoint of the song, Chung handed over the drums to Aksel Coe, the drummer for Okey Dokey, and crowd surfed amongst extended arms as water flung out onto the crammed figures from the bottles of the cast on stage.

Bouncing bodies rippled as the openers lifted up Summer Salt members on their shoulders and tag-teamed instruments on the already hectic stage. Chung soon returned to his throne to finish off the set and aided in delivering a powerful finale to what was both a memorable first performance in Boulder and tour intermission for the foreseeable future.

For updates on when the rest of Summer Salt’s tour will resume, check out their Instagram here, and their band website here.