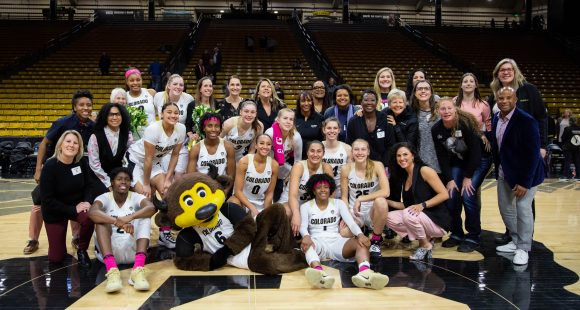 The CU women’s basketball team poses for the camera with one of the alumni teams from the ’90s. Feb. 14, 2020. (Casey Paul/CU Independent)

The University of Colorado Boulder women’s and men’s basketball teams are rolling into the week looking to make noise in the Pac-12 playoff race. Both CU basketball teams are coming off recent tough losses that have major effects on their ability to have postseason success.

The men’s basketball team just got back from a 1-1 record against the Oregon teams which included a big loss, 68-60, to No. 14 Oregon. It put them in jeopardy of losing the first spot in the Pac-12 Conference even with the team’s big bounce-back win against Oregon State, 69-47. The Buffaloes play the University of Southern California Thursday at 7:00 p.m MST and the University of California, Los Angeles Saturday at 2.00 p.m MST to try and continue the dominance they have had in Pac-12 play. Both games will be held at the Events Center.

If Colorado suffers a loss to either team this week they would possibly lose the first seed in the Pac-12 tournament. The games against USC and UCLA are must-wins to prevent Boulder from having a tougher road to the Pac-12 championship. The Bruins upset Boulder in the previous matchup, 72-68, and neither game will be easy.

On the women’s side, CU suffered a heartbreaking loss to No. 8 Stanford. This is the second time this season that Colorado played Stanford, one of the best teams in the nation, down to the wire and lost by a single possession. The Buffs may be at the bottom of the Pac-12 Conference, but that game showed they can compete with anyone in it. Due to CU’s lackluster record, these two games this week are necessary in order to make the postseason tournament.

The Buffaloes are playing two teams that they have yet to play this year in No. 21 Arizona State and No. 11 Arizona. Both these teams are top teams in the nation and Buffs have a lot of work to do in order to make a postseason push. CU will play Arizona State Friday at 7:00 p.m MST and Arizona Sunday at 12:00 p.m. MST.