Colorado women’s basketball set to host Cal and No. 8 Stanford 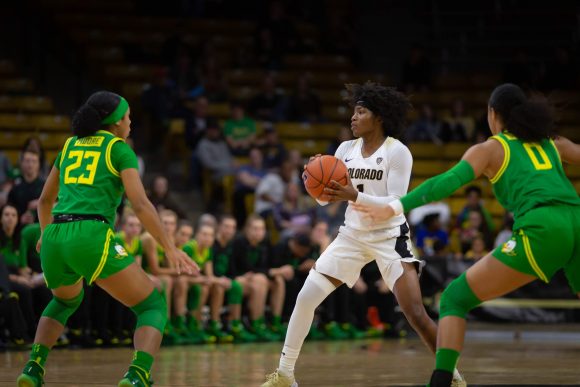 Colorado guard Jaylyn Sherrod looks for a teammate to pass the ball to during game against Oregon on Feb. 1, 2020. (Kevin Wu/CU Independent)

The University of Colorado women’s basketball team is looking to rebound off of two losses on their Washington trip when they host Northern California schools the California Golden Bears and No. 8 ranked Stanford Cardinal. The Buffs are looking to keep their tournament hopes alive with this homestand, as these two games have become must-win situations.

The Cal Bears come into Boulder on the heels of two losses, much like Colorado. Colorado won the first meeting, in Berkley, by a score of 62-50. Sophomore guard Emma Clark lead the team that day with 14 points, so watch for her to continue her success against Cal. Look for this game to be a turnaround for the Buffs as they try and get back on the right path. That game is scheduled for 7 p.m. MST on Friday, Feb. 14 at the CU Events Center.

To finish off the week, Colorado will face a tough task when No. 8 ranked Stanford rolls into town. The last time these two teams played, it was an instant classic. Colorado marched into then-ranked No. 6 Stanford and gave it all they had. The game came down to the final seconds when junior guard/forward Mya Hollinshed drilled a three-pointer with less than two seconds of play to take the lead. A perfect Stanford offensive sequence tied the game at the buzzer, and Colorado eventually fell in overtime. This game could be intriguing for the Buffs as they have home-court advantage and a win over Stanford could propel them back into the conversation come late March. This game is set to be played at noon MST on Sunday, Feb. 16.

Tickets and more information can be found here.