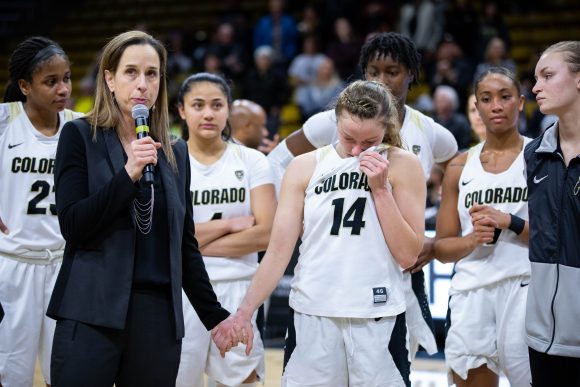 The University of Colorado women’s basketball team hosted the 10th-ranked Oregon State Beavers Thursday night following their road win over the California Bears last Sunday. Oregon State dominated in the second half and went on to win 79-52.

“I thought we played hard physically,” said CU head coach JR Payne following the loss. “I think mentally as a whole, we just weren’t dialed into our game plan as effectively as we needed to be.”

The Beavers came to Boulder looking to snap a three-game losing streak, which included a pair of losses to No. 3 Oregon. Meanwhile, Colorado hoped to improve to 8-2 at the CU Events Center. The Buffs 14-6 (3-6 Pac-12) have struggled in conference play this season, losing to Utah, UCLA and Stanford prior to last Sunday’s win over Cal.

Freshman guard Jaylyn Sherrod, who played her way into the starting lineup after six games, proved to be an offensive catalyst in Colorado’s overtime loss against No. 6 Stanford and brought energy early on against Oregon State. Sherrod opened the game forcing a tie-up and draining a deep two to get the Buffs on the board, but Oregon State responded with a 14-2 run.

Colorado closed the first quarter on a 6-0 run and trimmed the Beaver lead to seven. After providing a spark in the first 10 minutes, Sherrod picked up her second foul early in the second, sending her to the bench for the remainder of the half. While the Buffs’ offense kept pace with Oregon State with the absence of Sherrod, defensively the lapses were apparent.

Colorado briefly implemented a zone defense, which proved effective for a handful of possessions until the Beavers got going from deep. Oregon State finished the game 13-of-19 from three, five of which came in the first quarter. The Buffaloes kept the game tight with Sherrod on the bench for most of the quarter until the last three minutes where Colorado went scoreless, missing their last five field goal attempts to end the half. The Beavers held a nine-point advantage at the break.

Oregon State buried the Buffs in the first three minutes of the second half. A 12-2 Beaver run put Colorado in a 17-point hole with three minutes gone in the third quarter. Colorado mustered just two points through nearly seven minutes of play in the second half. Meanwhile, Oregon State’s three-point barrage continued into the third quarter. The three-point defense wasn’t the only pitfall for the Buffs. Contrary to their game in Berkeley, Colorado failed to rebound effectively Sunday evening, losing the battle on the boards 50-27. Redshirt freshman center Charlotte Whittaker said being aggressive doesn’t necessarily guarantee successful rebounding.

“What changed was just our mindset and we weren’t locked in at times,” Whittaker said. “I think we were aggressive on the boards, but it’s the little things that actually get you the ball and I think we weren’t as locked in as we were in the previous games.”

It won’t get any easier for the Buffs as they host No. 3 Oregon Saturday afternoon at the CU Events Center to wrap up a two-game homestand. Whittaker said playing the top teams in the Pac-12 gives Colorado a chance to learn from their mistakes, something they’ll have to do if they hope to rebound against the Ducks.

“Going into the next game, we have a lot to learn and we need to be locked in tomorrow and take this as a massive learning opportunity for us,” Whittaker said. “Especially going into play Oregon on Saturday. We need to learn a lot, be able to take on the blueprints that our coaches have spent ages trying to get together and stick to the game plan.”

“We know we are good enough to execute at a high level.”

Tipoff on Saturday between Oregon and Colorado is set for 2 p.m. MST. TV information has yet to be announced.