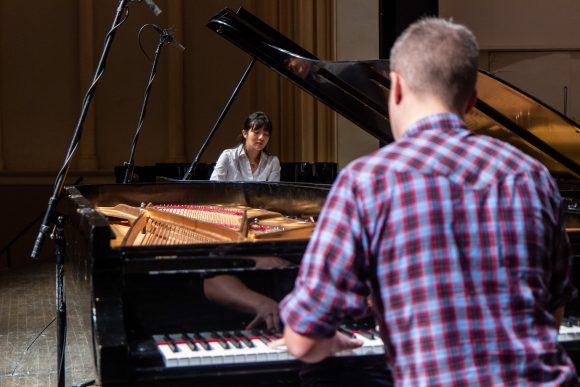 With extravagant flamboyance and unbelievable technical prowess, Anderson and Roe Piano Duo bring new excitement to classical music. During their adrenaline-filled, absurdly fast performance on Saturday night in Macky Auditorium, the duo played an endless torrent of scales in “Mozart and More” backed by the Boulder Philharmonic Orchestra.

Anderson and Roe, both Julliard graduates, have attained fame for their musical mastery and innovative duo arrangements. Their five duo albums stayed at the top of the Billboard Classical Charts for months. Their releases showcase a range of styles from the 2015 “The Art of Bach” to their 2018 release “Mother: A Musical Tribute,” featuring innovative arrangements of Simon and Garfunkel, Grieg, Lennon and McCartney, Dvorak and Brahms. In addition, their playful, theatrical and intimate music videos have been nominated for Emmys, and they have appeared on NPR’s “From The Top” as well as PBS and the BBC.

Lyrical, yet light, Faure’s work transitioned well into the Mozart-filled rest of the concert, which included Anderson and Roe for the “Concerto for Three Pianos in F Major, K. 242” and the “Ragtime alla Turca” and the orchestra alone for the “Symphony No. 35 in D Major, K. 385.”

Written for Countess Maria Antonia Lodron in Salzburg, Austria, Mozart’s “Concerto for Three Pianos in F Major” exhausted with the sheer volume of notes. The 25-minute concerto became a never-ending stream of rapid scales, which showcased Anderson and Roe’s profound mastery and ease of their instruments. Conductor Butterman joined the duo, playing what he called the “easiest part,” written for the Countesses’ youngest daughter. As six hands danced across the octaves, running from the lowest to highest keys in a few seconds, the trio demonstrated breathtaking accuracy, precision and blend, as the repetitive Mozartain display dragged on. 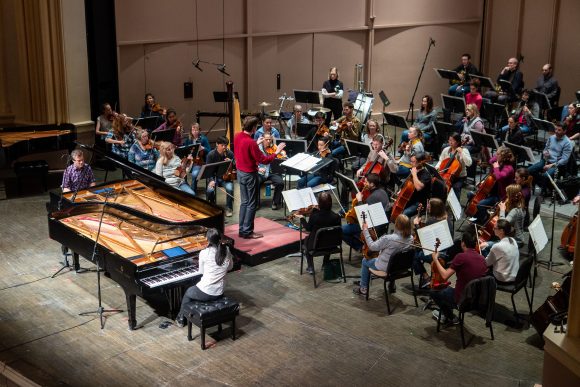 Anderson and Roe’s duo arrangements of the iconic “Ragtime alla Turca” provided a nice break from the infinite scales, though no less showy and pompous. The well-known hopping, exuberant ragtime melody alternated with a jazzy call and response between Roe and the horn section, becoming a repetitive rock-like anthem.

Their mysterious, dark interpretation of “Danse Macabre” by Camille Saint-Saens continued the playful energy, followed by the grand, ambitious highlights of George Bizet’s “Carmen” as a fantasy for two pianos. The introduction and classic “Habanera” in “Carmen Fantasy for Two Pianos” captured the lascivious, lush landscape of Bizet, though the later arranged recitatives and dancing party scene lacked dynamism without the beautiful French lyrics.

The duo’s flair and playfulness truly emerged in the encore arrangement of “I Want To Live in America” from Leonard Bernstein’s “West Side Story.” Using body percussion, banging on the piano and switching places and pianos effortlessly, the duo showed off with jaw-droppingly fast banging amidst ostentatious showmanship. With this final send-off, they cemented their status as consummate Julliard prodigies and creative, fun-loving musicians, eager to reimagine the classical landscape.