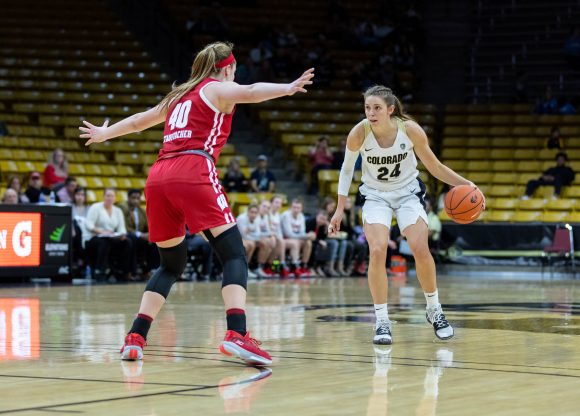 Sophomore guard Aubrey Knight dribbles the ball while looking for a way to get around her opponent during a game on Nov. 14, 2019 (Casey Paul/CU Independent)

The University of Colorado women’s basketball team continued their three-game homestand Sunday, hosting No. 8 UCLA Bruins. The Buffs suffered their first home loss this season (8-1), falling 65-62 to the Bruins at the CU Events Center.

UCLA, off to their best start in program history at 15-0, looked to make it nine straight wins over the Buffs since the Bruins last loss to Colorado in the 2014 Pac-12 Tournament. This season, Colorado had just one win in its past three games prior to the matchup with UCLA, suffering a pair of road losses to No. 2 Oregon and No. 3 Oregon State before their home victory over the Trojans on Friday.

Colorado led early at 9-4 following a three-pointer from junior forward Mya Hollingshed. Both teams started relatively slow offensively, shooting a combined 6-of-24 from the field. Junior forward Annika Jank scored her first five points rapidly after scoring an easy layup off a feed from sophomore forward Peanut Tuitele and knocking down a three to give the Buffs a 15-8 lead. Colorado held UCLA to one field goal in its last 10 attempts to end the first quarter, maintaining a seven-point edge.

“We dribbled off our foot several times and we were having a hard time catching the ball, giving up transition baskets,” said UCLA head coach JR Payne.

“It just snowballed so quickly and I think, like I said, we’re a very resilient group,” Payne said. “We can battle through some adversity, but in this conference, you cannot afford to play that way for a stretch like that. As a group, we got to figure out what to do to stop the bleeding when it’s starting to go that way.”

The Bruins narrowed the Colorado lead to one after the Buffs failed to score for over three and a half minutes midway through in the second quarter. Tuitele broke the Buffs’ scoring drought after slipping to the basket for an easy layup. A UCLA three-pointer from junior forward and Colorado native Michaela Onyenwere tied the game at 24 with just over four minutes left in the second quarter.

A pair of free throws from freshman guard Jaylyn Sherrod ended a 9-0 Bruins run late in the second quarter. The charity stripe kept the Buffs within striking distance at halftime. UCLA led 35-29 at the break.

Colorado responded with an 11-0 run in the last two minutes of the quarter. A three-point play from Sherrod and five straight points from Hollingshed cut the Bruins lead to 14 at the end of three quarters.

“We just had to take it possession by possession,” said Hollingshed. “It’s a game of runs, so you just got to keep playing.”

A Hollingshed three-pointer and two free throws from Tuitele trimmed the UCLA lead to 10 halfway through the final quarter. The Buffs switched to a zone defense late to try and trap the Bruins on the catch. Back-to-back threes from sophomore guard Emma Clarke and Tuitele cut the UCLA lead to four with less than two minutes remaining. Sherrod found Tuitele for an easy layup to trim the UCLA lead to two.

At one point in the third quarter, the UCLA run climbed to 39-7 going back to the first half. Hollingshed talked postgame about what went into Colorado’s comeback effort in the fourth quarter.

“I think it’s just our mindset as a team,” Hollingshed said. “We have a lot of faith in each other, a lot of faith in our coaches that we were going to keep playing. So, it doesn’t matter what the score is, it could be 0-0 or whatever the stretch they (UCLA) were in.”

After the Bruins missed a layup in close, senior guard Quinessa Caylao-Do came down with a defensive rebound with under a minute to play but lost the handle after contact from a UCLA defender.

Senior guard Dean Japreece went 1-of-2 from the free throw line on the following possession and Colorado had a chance down three with 10 seconds to play. Sherrod’s game-tying three-point attempt fell short and UCLA held on to win 65-62.

Colorado faced three top 10 teams in its first five conference games and consequently, there hasn’t been time to ease into Pac-12 play. The Buffs allowed a six-point half time deficit to increase to 25 against the Bruins and were unable to complete the comeback. Payne said the team isn’t really one to celebrate moral victories despite the valiant effort late.

“I thought we played a great two and a half quarters and the one and a half quarters that we didn’t play well I think really cost us the ball game,” Payne said. “But, I’m proud of our resiliency, proud of our ability to come back. There aren’t that many teams in the country that have played UCLA to that type of ball game, to a one-possession game.”

The Buffs’ offense looked slightly out of sync on the last possession. Payne said the final play didn’t go as planned.

“We wanted Emma (Clarke) to be able to get open for three and she couldn’t get open,” Payne said. “She was having a hard time getting off the defense in order to pop. It was a pretty quick three we wanted.”

Colorado closes out their three-game conference homestand Friday, Jan. 17, hosting the Utah Utes. Tipoff is set for 6:30 p.m. MST. TV information has yet to be announced.