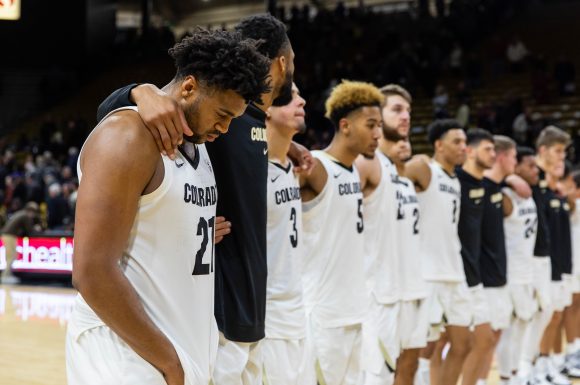 Head coach Tad Boyle took full responsibility for preparing his team for Oregon State following CU’s upset victory over the fourth-ranked Ducks last Thursday night. The Beavers came away with a 76-74 victory last year when the two teams met in Boulder. Unfortunately for Boyle and the Buffs, poor late-game execution caused CU to suffer a similar fate this time around.

Boyle said the team “imploded” late in the second half.

“We didn’t play with it with the same aggressiveness and we knew,” Boyle said.

The Beavers implemented a one-three-one zone with about five minutes to play in the game, at which point they trailed by 10. Not only did the Buffs shoot a significantly lower field goal percentage following the switch to the zone defense, but all four of junior guard McKinley Wright IV’s turnovers also came in the final four minutes.

Boyle knew Oregon State would utilize the one-three-one zone at some point throughout the game and Colorado prepared for it in practice, which made it extra frustrating for Boyle to swallow.

“Now we told our guys, ‘they’ll come trap you if you hold on to that ball and you’re in the trap area, they’ll come. If they do, you got to either split the trap, or you got to get the ball moved before the trap comes and then you have to come meet passes,'” Boyle said. “Our guys were on their heels and you can’t make any kind of defense, especially that one, on your heels.”

The Buffs will travel to Corvallis for their second game of the season against the Beavers on Feb. 15. Boyle said it’s vital that both players and coaches learn from this loss.

“We’re playing in Corvallis sometime in February, and my guess is we’re going to see the one-three-one zone,” Boyle said. “I’m not a rocket scientist but my guess is we’ll see it. We better handle it better than we handled it tonight.”

Both teams shot relatively high percentages from the field. Oregon finished the game at 53%, while the Buffs shot just under 50%. After an impressive performance defending the three-point line Thursday night against the Ducks, Colorado did it again against the Beavers, limiting Oregon State to 4-of-14 from downtown. But it didn’t matter, the Beavers got repeated looks from close range, which allowed them to finish the game on a 14-2 run over the final four minutes and ultimately secure the win.

“We beat ourselves,” he said.

Despite Colorado’s newfound offensive efficiency during its five-game win streak leading up to the game, turnovers have continued to plague the team against stiffer competition, especially in late-game situations.

Boyle identified turnovers as a recurring theme in the three losses.

“Turnovers, 15 turnovers down the stretch,” Boyle said. “I don’t know the number in the last five minutes, but a majority of those 15 came then. I thought at halftime we were in pretty good shape turnover wise. We weren’t great, but turnovers (are) a common trend without a doubt.”

Moving forward, Boyle said the is to communicate to his team that in the Pac-12, “nothing is going to be given to you.”

Colorado’s next game is on Jan. 12 against the Utah Utes. The game will pay tribute to the Russell “Sox” Walseth era, highlighted by members of Walseth’s teams being honored during the game. Walseth is the all-time leader in coaching wins and guided the Buffs to three Big Eight Conference titles and NCAA Appearances in 1961-62, ’62-63 and ’68-69. Tip-off is set for 4 p.m. MST and the game will be televised on ESPNU.