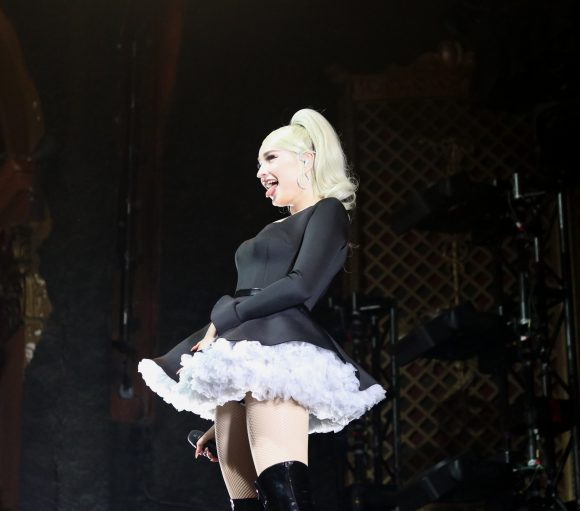 Imagine seeing a massively famous, arena level pop-star — think Madonna in 1990, Britney in 2000, Gwen Stefani in 2004 — except at a venue with a capacity of just 1600. This is the sort of energy that was present during Kim Petras’ Wednesday show at Denver’s Ogden Theater.

Kim took the stage after a warmup DJ set. The singer couldn’t hold back a smile as she soaked in the screams of the fans; they reached up towards her, trying to catch a glance, or a wave, or anything at all. One especially entranced fan shouted, “I love her— I just can’t help it!”

Kim emerged from backstage wearing a bouncy, ruffled short black dress. This was the first of her six total outfits and three different hairstyles, each selected to match the different portions of her setlist. The only thing that stayed consistent between the outfits were her differently-colored, chunky platform high heels. She began with fan-favorite “Meet the Parents” trotting around stage and striking poses. She even had a Marilyn Monroe “pushing-down-the-dress” moment with a fan blowing her dress and hair up from below the stage. As the show went on, Kim continued to provide the crowd with hit after hit, changing mood and theme to match the feeling of her songs. 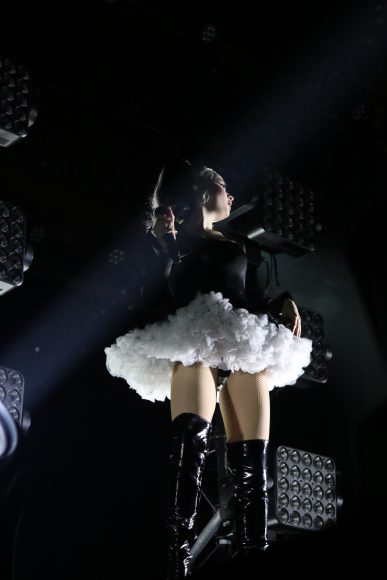 Wednesday’s Denver show comes after Kim made news for the events surrounding her St. Louis show, where the Westboro Baptist Church picketed (because Kim is transgender) while she posed for photos in front of them, clad in fishnets and sunglasses. Wednesday’s show brought no protesters from the hate group.

Kim’s shows are known for being bastions of queerness, where all types of expression are allowed and encouraged. This sort of openness, where the crowd could feel safe being completely themselves, along with that pop-diva persona that Kim exudes on stage, made for a uniquely entertaining concert experience.

Kim’s discography is an eclectic mix that moves between deep, dark tech-house and shining, bright pop anthems seamlessly. The bubblegum-pop synth sounds of “I Don’t Want It At All” somehow fit in perfectly next to the basement techno of “Purgatory” and “There Will Be Blood.” Kim occasionally mounted a spinning pedestal to pose like a statue, or perhaps just as her iconic self. Towards the end of the set, Kim changed into a simple blue tour t-shirt to perform a stripped-down cover of The Killers’ “Human.” She encouraged fans to sing along with her, loud and unabashed.

After leaving the stage and returning for an encore, Kim brought out the real bangers, including “Heart To Break.” She finished the night off with “Sweet Spot,” insisting that the crowd jump to the last beat, provoking joyous chaos. Throughout the night, the entire audience had a grin on their face, overwhelmed with the infectious energy that Kim brought to the stage.

Petras’ show was a reminder of the sort of place that Kim occupies in the current musical environment. She is able to inhabit varying levels of pop-star and relatable; a sincere musician laying her emotions bare. She is difficult to define, but this is exactly what makes her so intriguing. She is a queer diva for a new decade of pop music.

More information on Petras and her current tour can be found here.