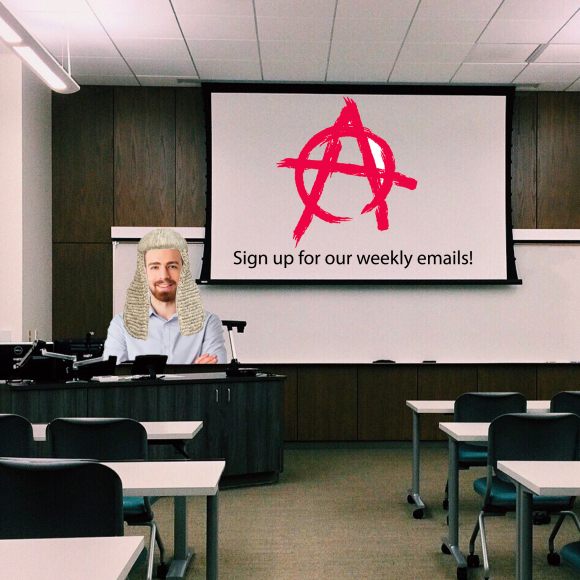 Founder of the CU Anarchy Club Guy Cox started the first meeting like any other club: by banging a gavel and yelling, “Order, order.”

Cox created the Anarchy Club for one main reason: “chaos.” But Cox knew that truly dismantling mayhem could not be achieved by one man. It would take an army.

A wild assortment of soldiers took to their assigned seats after hearing the pounding of the gavel.

Once everyone quieted down, Cox introduced himself and outlined the purpose of the club: “To fight against tyranny and bring freedom to the lands of a forgotten America.” The crowd chaotically cheered. Some rose from their seats and raised a fist to the sky, while others remained seated but screamed at the top of their lungs. Cox pounded his gavel to quiet the crowd.

Once the members returned to their seated positions, Cox called for an election for Anarchy Club president and vice president. Cox nominated himself for president and chose Brad Tinydingle, a sophmore jousting major, to be his running mate.

Hesitant, everyone raised their hand when Cox asked who all was in favor of his presidency.

Following the vote and with all the members now sitting in a circle, Cox instructed everyone that they were now going to talk about their plans for creating anarchy in the new age of government. All members were promised a chance to discuss their ideas, but to avoid people talking over one another, Cox gave the person talking a bright green ball. “Only the person with the ball can talk,” Cox said. “Got it?” Everyone nodded.

The ball traversed through the circle as everyone discussed how they should take down the fascist government that is the United States. While one member with the bright green ball talked about her idea to stop paying taxes altogether, another member named Jared (his friends call him Blade) interrupted her, screaming that if they didn’t pay their taxes, they could go to jail. Cox jumped into the argument, and said, “I’m sorry, do you have the green ball, Jared?”

The woman continued on, and everyone clapped in a synchronized fashion (Cox also ordered that all celebration was to be done in an orderly manner).

When the ball finished its eccentric journey across the room,  Cox called the meeting to an end. One member named Blade (his friends call him Jared) asked Cox if they could continue the meeting because he “had a plan to completely eradicate the government.”

“We’ll get to that next meeting,” Cox said.

“But we need to talk about it now,” Blade responded.

“You’re out of order,” Cox screamed.

They left the room like everyone does: the same as it was.