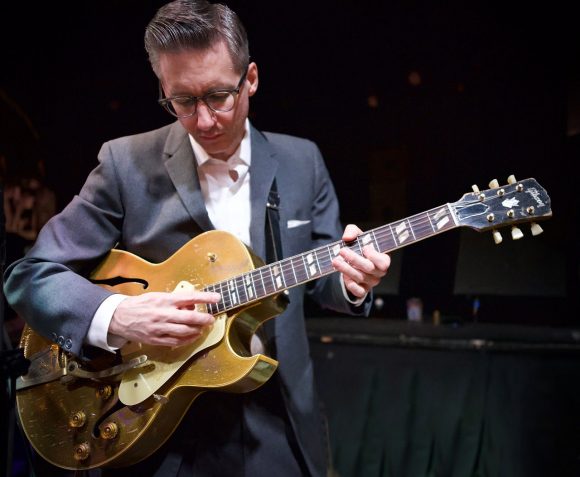 Paterson, originally from Wisconsin but now based out of Chicago, taught himself to play electric guitar by listening to records in high school. He learned from his guitar heroes Chet Atkins, Wes Paul and Hank Garland. He said he “got obsessed buying as many blues records” as possible.

“I like the old guitar players. I try to figure out what they were doing,” Paterson said. “Everybody you watch play is a teacher. You try to soak up as much as you can from everybody.”

Twenty years ago, Paterson moved to Chicago for the “music scene.” He started playing at clubs with different bands and learned new styles, including rockabilly, jazz, country and Western swing.

Paterson loves to play “retro music from the 1920s to 1960s” and enjoys “playing good music with good musicians,” no matter the style. He currently performs with several retro bands: The Modern Sounds, The Western Elstons, Devil in a Woodpile and The Joel Paterson trio with organist Chris Foreman.

A few years ago, Paterson’s fans encouraged him to record a Christmas album, excited by his YouTube Christmas song covers. In 2017, Paterson then recorded and released “Hi-Fi Christmas Guitar.” The album featured 14 classic holiday tunes with a jazz fusion twist.

“We couldn’t keep up with the demand for it,” Paterson said. “I think people needed a Christmas album that wasn’t cheesy.”

To accompany this album, Paterson recorded “Let it Be Guitar! Joel Paterson Plays the Beatles.” He calls the two albums a quasi “concept album set,” showcasing his cross-genre cover style.

Paterson admitted that “you can never outdo the Beatles,” so he applied his own touch, adding multiple guitar tracks “to create an orchestra of guitar” with accompanying keyboard and drums. On the record, he tried to “sneak in a lot of references” to his favorite guitar players. From the jamming “Can’t Buy Me Love” to the laid-back, surfy “This Boy” to the light, playful “All My Loving,” Paterson expertly expresses the Beatles’ varying moods using his soulful guitar.

For the Christmas tour, Paterson will play solo arrangements of songs from “Hi-Fi Christmas Guitar” and his Beatles tribute album.

More information about Joel Paterson can be found here. Tickets for the Fox Theater show can be purchased here.