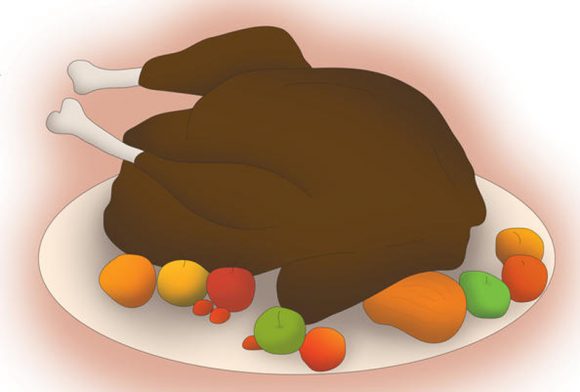 Thanksgiving is a time to catch up with family and eat, then eat some more, and maybe even more after that. But after days of eating leftover turkey, it often gets thrown out. We need to change that.

Food waste is something that the University of Colorado Boulder’s dining services manage well. CU’s Scrape Your Plate Day measures the average students’ food waste three times in a semester.  This initiative aims to encourage students to waste less and be mindful by adding only as much as they can consume to their plate. CU Boulder students successfully accomplish these sustainable practices on campus and they should not forget to do the same when they are at home.

Food waste is a significant contributor to climate change. All of the wasted food from Thanksgiving mentioned earlier will emit half a million metric tons of greenhouse gases, which are one of the leading causes of climate change. These gases trap heat within the atmosphere, encouraging climate change. While wasting food feels morally wrong, its impact is also more harmful than that. Though throwing away a leftover bite may seem insignificant, that one bite is directly contributing to changing the planet’s ecosystem through excessive water waste and added greenhouse gasses created during the cultivation of what was on the plate.

CU Boulder students successfully accomplish these sustainable practices on campus and they should not forget to do the same when they are at home.

Consumers are not the only ones at fault. A major component of food waste during the holiday season occurs in supermarkets. Stores often choose to only display the most attractive foods that fit “cosmetic standards” in size and color. Because of this, they waste a significant amount of food during the prime planning and purchasing times for these large meals.

In a Medium article, Stephanie Feldstein states that nine out of the top ten grocery stores within the United States have not disclosed their total food waste, though it is known that they do not place every item on shelves for appearance reasons. Likewise, these stores give recommendations and tips to their shoppers during the holiday. Some stores recommend up to 12 times the actual serving sizes of these foods, writes Feldstein. This leads to customers wasting money on unnecessary amounts of food that will likely end up contributing to such food waste. Before purchasing food for their meal, consumers should research serving sizes as to not waste or spend too much money.

American society has conformed to the tradition of preparing a large and intimidating feast. But, as students, we cannot forget the importance of wasting as little as possible. By discouraging over-purchasing and encouraging “scraping your plate” like in the dining halls, this Thanksgiving’s meal could result in the least amount of waste to date. Achieving CU Boulder’s mission when at home this holiday is possible with one properly portioned turkey at a time.

Zoe is a junior at the University of Colorado at Boulder majoring in journalism with a minor in communication. She is a managing editor and staff writer for the CU Independent. Zoe has a passion for social issues, sustainability and educating those around her.