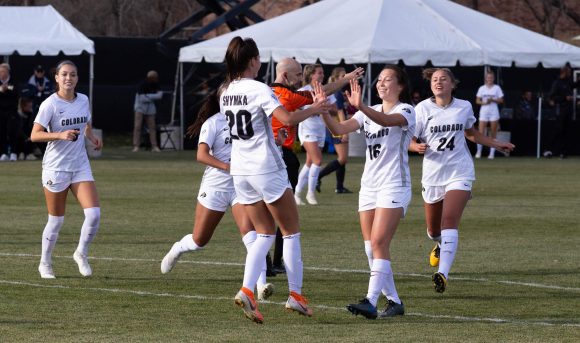 The teams entered the matchup with similar records but CU came in with an edge. Colorado finished their season with an 11-7-2 record while UNC ended 9-10-4. Back in September, the Buffs won the lone matchup between these two in the regular season by a score of 4-0.

CU appeared to put an emphasis on ball control early, looking for the safe pass rather than rushing the ball into the offensive third of the field. However, despite CU’s control attempts, UNC’s defense pressed and kept the Buffs from getting any meaningful possession time with the ball.

“Credit to Northern Colorado,” said CU head coach Danny Sanchez. “They came out with a game plan and made it very difficult for us early.”

The Bears turned that defense into offense and earned three shots within the first six minutes of the game, all of which went wide right and didn’t come close to testing Buffs senior goalkeeper Jalen “JJ” Tompkins. 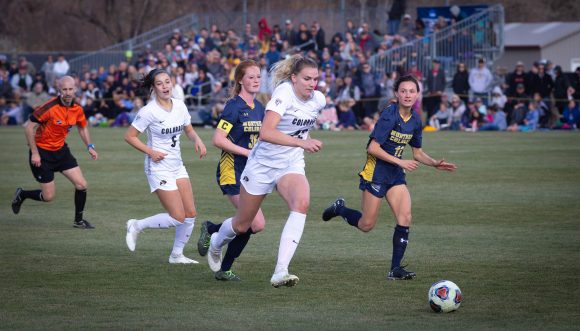 In the 16th minute, CU earned their first corner kick of the match in the Buffs first real chance on goal of the game. Senior defender Kelsey Aaknes delivered a crisp ball into the box, but senior forward Taylor Kornieck deflected it just over the crossbar.

Colorado finally managed to break the tie in the 29th minute. Sophomore forward Libby Geraghty, who had just subbed into the game, received a through pass from freshman forward Tessa Barton and found herself in a one-on-one opportunity with the UNC goalie. Geraghty shot and banked the ball off the near post before it trickled over the line, 1-0 Buffaloes.

Taylor Kornieck was also credited with an assist, her 24th career assist and 100th career point, further cementing her legacy as one of the best soccer players to ever come through this CU Boulder soccer program.

“The challenge isn’t preparing for the second time, it’s just for playing the Buffs,” said UNC head coach Tim Barrera on having to play the Buffs twice in a season. “What they represent with Taylor Kornieck and some of the other players that they have, we knew we were going to have to defend and once we got forward, we had to take our chances and today, we didn’t take out chances.”

Geraghty’s goal seemed to spark a wave of energy and confidence within CU as the team pressed hard for the remainder of the half. In the 33rd minute, sophomore midfielder Kayleigh Webb took a rocket of a shot from just beyond the 18-yard box that struck the post and left it ringing, but the ball stayed out.

Just a minute later, CU battled in the box for a loose ball and earned a penalty kick. Kornieck struck the ball with ease and put the Buffs up 2-0. With this goal, Kornieck broke CU’s single-season PK record with her fourth of the season and her ninth of her career, also a CU record.

“Not just my PK, but all the girls, in general, were just really good and it helps set a tone for the next game,” Kornieck said.

Colorado dominated the rest of the half and took a 2-0 lead into the locker room. At halftime, Colorado led 13-2 in total shots and possessed the ball for 66% of the half. 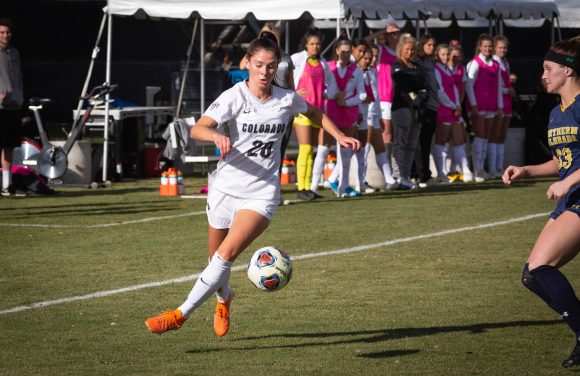 Senior forward Camilla Shymka attempts to keep the ball away from her opponent during the game against Northern Colorado. Nov. 16, 2019 (Kevin Wu/CU Independent)

The Buffs started the second half with a goal in the 47th minute. After a long run down the sideline, Barton crossed the ball into the box to the feet of senior forward Camilla Shymka. Shymka tapped the ball past one defender to freshman midfielder Roo Yarnell-Williams who placed it into the back of the net, making it a 3-0 CU lead.

“I think the key to the match obviously was getting that early goal in the second half,” Sanchez said. “That kind of opened the game up for us a little bit.”

UNC got a rare chance in the 54th minute off a corner kick. The delivery landed in the box but the ensuing shot flew over the crossbar and resulted in CU goal kick.

Colorado’s goalie, Tompkins, only had to make one save the whole game which helped her secure yet another shutout. With this shutout, Tompkins tied Colorado’s solo shutout record at 25.

“The defense did great,” Tompkins said. “We gave them a couple of opportunities but cleaned them up in the back, it’s always great to get a clean sheet going into the next game so I am happy with the result.”

In the 68th minute, CU knocked in goal number four. Freshman midfielder Jade Babcock-Chi had the ball in the corner and made a high-level skill move to lose her defender before sliding the ball past the goalkeeper at the far post. The goal marked Babcock-Chi’s first career goal and first career points.

In the 84th minute, the Buffs still wanted more. Shymka put goal number five into the net off an assist from freshman midfielder Amaya Gonzalez to make it a 5-0 CU lead.

Before the clock hit the 90-minute mark, CU snuck one more into the net off the foot of freshman forward Kyla Ferry in the 87th minute, her first career goal assisted by sophomore defender Chaynee Kingsbury. The final score ended with a massively lopsided score of 6-0 with CU taking round one of the NCAA Tournament with ease.

“It means the world to me, honestly,” Kornieck said about what was likely her last game ever at Prentup field. “I think we came out really strong and I was the key to getting that early goal in the first half too. I’m really proud of even Kyla, Camilla and Jade for getting their first goals this season too.”

The Buffaloes will play the winner of the University of Northern Carolina versus Belmont in the second round of the NCAA Tournament. Time, date and location TBD. 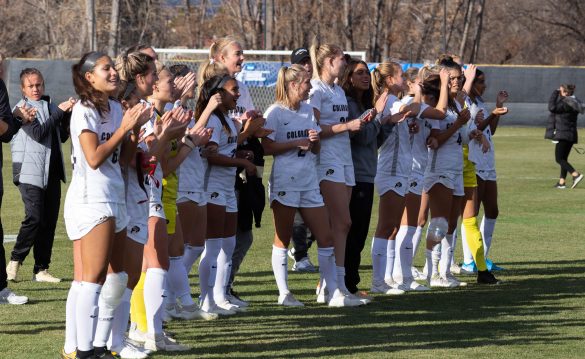 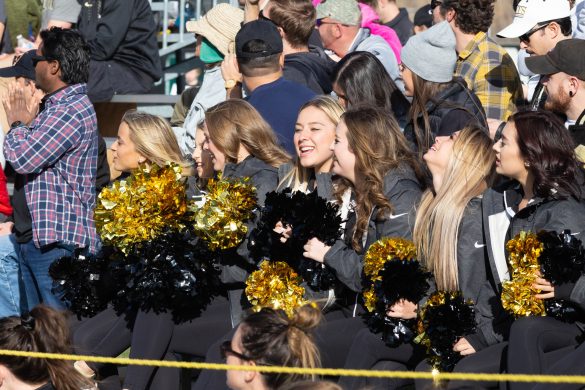 Members of the CU cheerleading squad sing the CU fight song after a goal made by the team during the game against Northern Colorado. Nov. 16, 2019 (Kevin Wu/CU Independent) 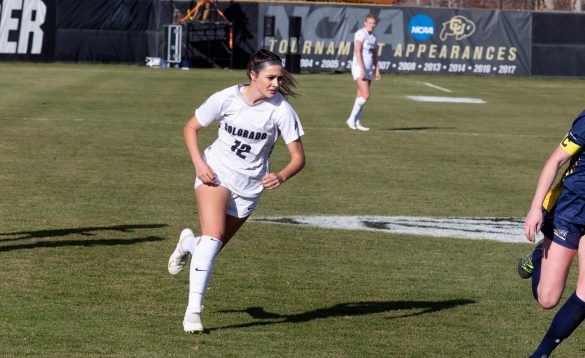 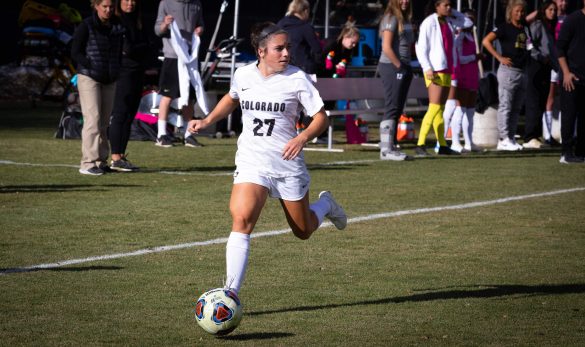 Junior defender Gabbi Chapa looks for an open teammate to pass to during the game against Northern Colorado. Nov. 16, 2019 (Kevin Wu/CU Independent) 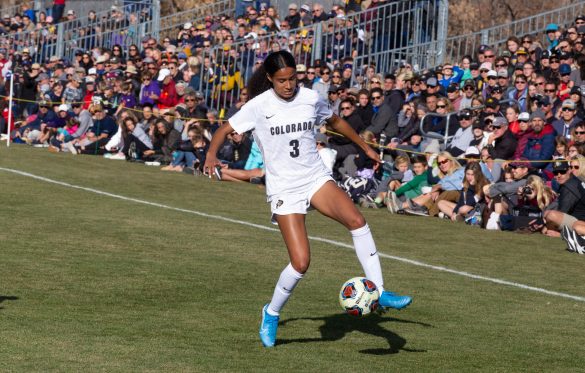 Junior defender Haileigh Adams rushes to the sideline to prevent the ball from going out of bounds. Nov. 16, 2019 (Kevin Wu/CU Independent) 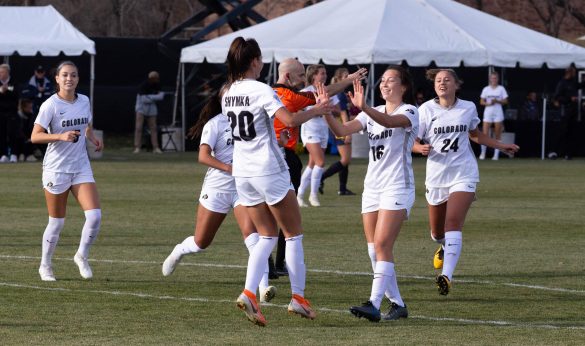 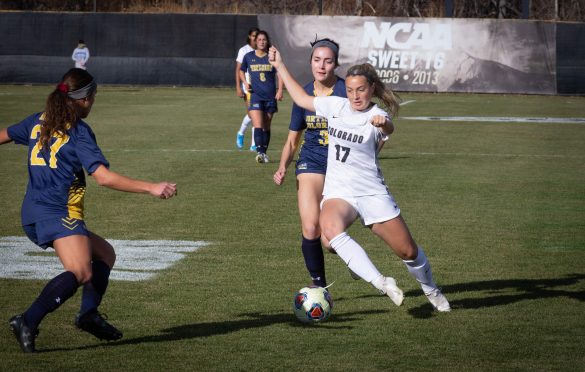 Junior forward Katie Joella weaves in between defenders in an attempt to score in the match against the UNC Bears. Nov. 16, 2019 (Kevin Wu/CU Independent) 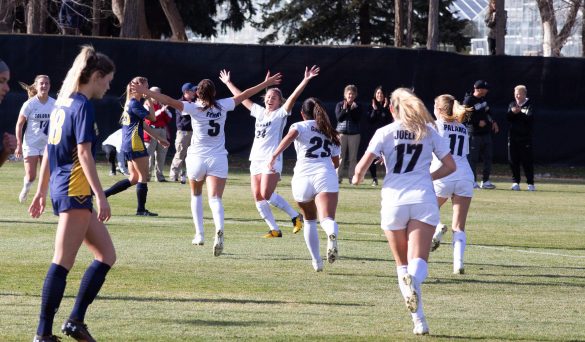 Forward Kyla Ferry rushes to celebrate her first goal of the season with her fellow teammates during the match against the UNC Bears. Nov. 16, 2019 (Kevin Wu/CU Independent)