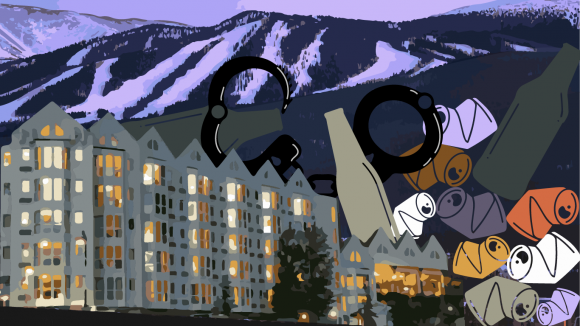 The University of Colorado Boulder was aware of a Sigma Phi Epsilon (SigEp) winter formal where fraternity members were kicked out of the hotel and a member given summons for trespassing and property damage. The incident also contributed to the fraternity’s split with Interfraternity Council (IFC) on The Hill.

When SigEp first announced its split with IFC on The Hill and its intentions to rejoin CU, public details of the formal were scant but police records obtained by the CU Independent show a wild night that eventually led to students being expelled from the fraternity.

Shortly after midnight on April 13, police were called to Winter Park Mountain Lodge as the hotel was in the process of removing the fraternity and other formal-goers. One fraternity member discharged a fire extinguisher into a hallway. The member was removed by hotel staff but snuck back in before everyone was kicked out. The member told police that he snuck back in because “I paid $300 to have fun with my boys,” according to the police records. He was found later that night consuming marijuana in a hotel room at a party with about 30 people in a room.

By the end of the evening, all formal-goers were removed from the hotel and a SigEp member faced a summons for trespassing and property damage. Formal-goers also stole alcohol from the hotel bar, but charges were not pressed, according to the notes.

Greek Advocate and IFC spokesperson Marc Stine said that issues with the fraternity had been at play even before the formal. Stine said the IFC on the Hill took “a lot of time” working to remediate SigEp’s violations. SigEp had been undergoing IFC investigations, with judicial hearings held to address legal charges including assault and disorderly conduct. While the IFC did not expel SigEp, Stine said that the chapter’s behavior had made the possibility of expulsion more likely. However, the fraternity voted to leave the IFC on the Hill before further judicial board decisions could be made.

SigEp originally stated in a press release in September that they decided to reaffiliate with CU to improve the “membership experience” and “chapter culture” and had not included any information on its IFC investigations or the formal. The chapter has currently been granted a provisional status with CU and within the coming weeks, the university will vote if the fraternity will be allowed to officially affiliate with its own fraternity system.

“When the incident at the hotel happened we were notified shortly after,” Stephanie Baldwin, CU assistant director for Fraternity and Sorority Life said.

“Matters were resolved between hotel management, the individual responsible parties, as well as the chapter’s executive board,” said Jake Weidemann, SigEp’s chapter president who would only comment through Sig EP Cheif Communications Officer Heather Kirk. “Members of the executive board and standards board conducted an internal membership review with the interviews occurring in May, and made decisions based on the individuals’ history within the chapter and their commitment to standards moving forward.”

Weidemann attended formal and, according to him, also went through being interviewed by other members through the internal membership review process. Before being president he served as the representative for SigEp during IFC on the Hill judicial board hearings.

According to Baldwin, the events did not influence the university’s decision to grant provisional affiliation. Fraternity members were upfront and informed the university after the events occurred, she said.

Baldwin said CU is changing to a “restorative justice” process. It is written in the constitution of the Office of Student Conduct that CU acts as an advisory committee to its Greek system These committees work with local officials of greek organizations and national headquarters when necessary.

“We have a great relationship with conduct in that they help guide,” Baldwin said. “The students really do manage the process.”

According to Baldwin, CU admits that SigEp members are students first. The behavior of one student reflects on everyone, no matter the organization they are involved in, she said. CU officials have spoken to national headquarters who agree the chapter has work to do within itself.

The university’s fraternity system ends its leadership cycle at the end of the year and will officially vote whether or not to let SigEp become a university-affiliated fraternity within the next few weeks. Through a process facilitated by the national organizers and university officials, the SigEp has been working to meet CU standards.