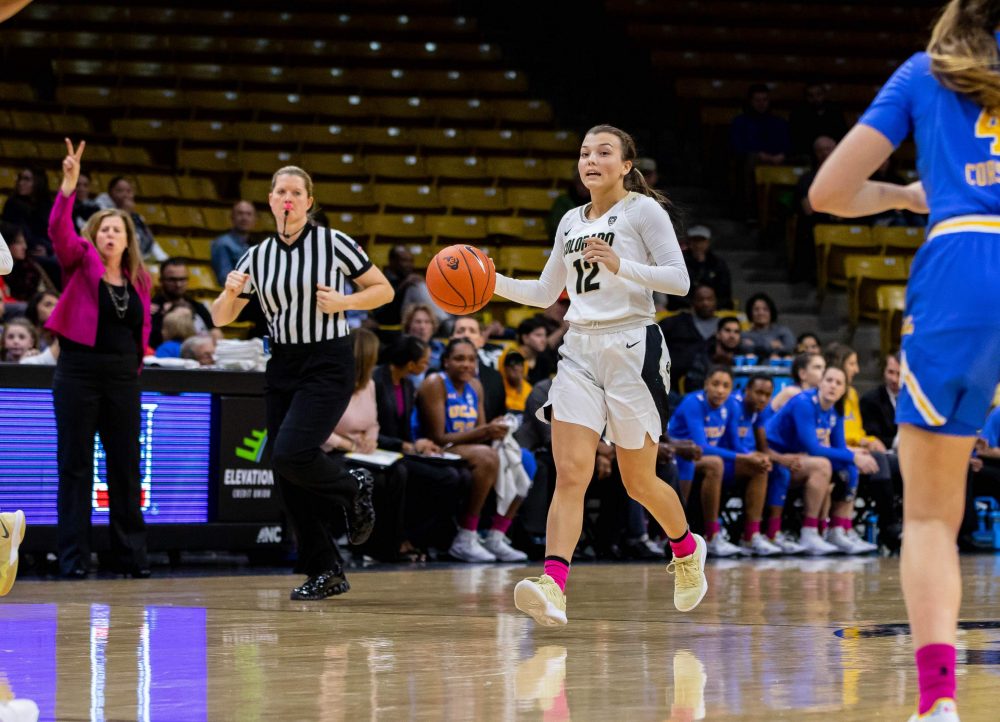 The University Colorado women’s basketball team defeated the New Jersey Institute of Technology Highlanders 80-57 in the team’s season opener at the CU Events Center on Sunday.

“It was a game of up and downs, I didn’t think we played particularly well but there are a lot of good things that you can take from this ballgame,” said Colorado head coach JR Payne. “Early games are just that, they are early games, so there are things that are going to look good and things that we really need to improve on.”

Colorado started the game hot, jumping to a 10-3 lead just four minutes into the game. Junior forward Mya Hollingshed made her presence known early, using her size to battle for points inside the paint. At the end of the first, Hollingshed earned six points and shot 3-of-4 from the field.

“Just taking what was there and not forcing it,” Hollingshed said about her performance. “Keeping it simple and just focusing on doing the things that I work on every day.”

NJIT’s game plan was clear from the beginning: shoot threes. At the end of the first quarter, the Highlanders had 15 points, all from three-pointers. Junior guard Ellyn Stoll led the way for NJIT with a pair of threes.

“Early games are just that, they are early games, so there are things that are going to look good and things that we really need to improve on.”

Colorado started the second quarter like the first, with a 9-0 run to stretch the Buffs lead to 29-15. A foul and a pair of free throws seemed to pump a little energy back into NJIT as they went on to hit a few more three-pointers to keep CU from running away with the game.

Again, Hollingshed turned up on New Jersey, scoring repeatedly in the paint and pushing her totals to 11 points, 5-of-7 from the field with one deep three midway through the second quarter.

NJIT’s sophomore guard Samantha Schultz joined the three-point parade with a pair of her own late in the second quarter to cut the score to a 31-25 lead for CU. NJIT would go on to end the first half shooting 7-of-16 from downtown.

Along with Hollingshed’s offense, the Buffaloes’ defense also helped CU to a 41-29 halftime lead. At the half, NJIT had 14 turnovers, six of which came off CU steals. Senior guard Quinessa Caylao-Do and sophomore guard Aubrey Knight led the team with two steals each.

“I think when we’re at our best we’re being aggressive defensively,” Payne said.

Ball movement characterized the start of the second half for CU who remained patient and favored passing the ball around the outside of the key until a clear shot opened up.

Hollingshed still owned the Buffs’ offense as she pushed her totals to 21 points while shooting 8-of-11 from the field with 5:34 left in the third quarter. Hollingshed also led the team with four steals, further padding her stats for the day. With just under five minutes to play in the third quarter, CU lead comfortably 54-34.

“It was definitely fun just to go out there with my team and do the things we have been executing in practice,” Hollingshed said. “To make it count for the first time just made it even more special.”

NJIT remained behind throughout the third but refused to give up, still sticking to their game plan and throwing three-pointers. With just over a minute left in the third, NJIT was shooting 10-of-21 from behind the arc.

Stoll led the Highlanders in scoring with 14 points, shooting 4-of-9 from the field with all four being three-point shots. Of NJIT’s 50 points at the end of the third quarter, 36 came from behind the arc. The third quarter would end with CU in the lead, 62-50.

Caylao-Do got things started for the Buffs in the fourth quarter, hitting a corner three after a crisp pass from freshman guard Jaylyn Sherrod, who would go on to finish the game with 11 assists. With that three, Caylao-Do extended her totals to 11 points, four rebounds and four assists with a pair of steals.

“I was really impressed,” said Payne of Sherrod’s play. “I was most impressed for a young point guard that when her shots weren’t falling she didn’t hang her head, she didn’t stop doing everything else. She continued to have great presence defensively.”

The fourth quarter mirrored the other three. Defense and size led the Buffs to attack in the paint and get to the foul line while NJIT stuck to their three-point game. While focusing on shooting from downtown could be considered a limited strategy, NJIT deserves credit for sticking to it and playing as well as they did. When the final buzzer sounded, the Highlanders shot 12-30 from downtown, earning over half of their points from beyond the arc.

“We really ramped it up on defense trying to get our hands in and box out more and just give more effort,” said sophomore guard Emma Clarke.

The Buffaloes will host Wisconsin at the CU Events Center on Thursday, Nov. 14 at 7 p.m. MST.