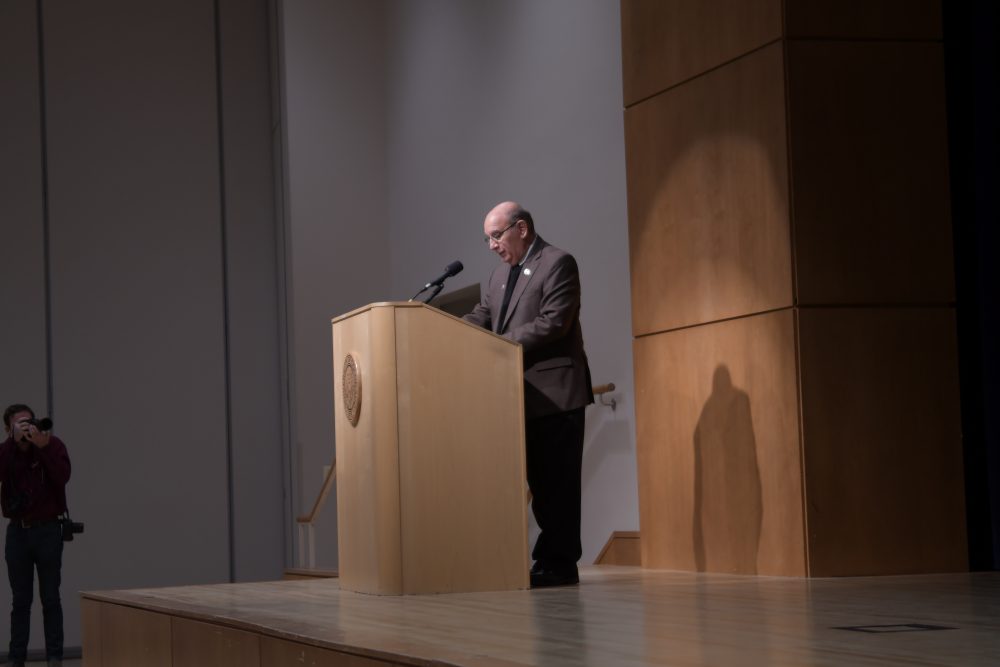 The University of Colorado Boulder celebrated the 100th annual Veterans Day Monday with a host of speakers at CU’s University Memorial Center (UMC).

“I encourage all of you to take a moment and consider the debt of gratitude that we owe our veterans,” said CU Boulder Chancellor Philip DiStefano in his opening speech. “Without their service and dedication to our nation, our freedom and liberties would not be as secure as they are today.

“With so much attention focused on things that divide us, it’s far too easy to overlook something that should unify us, our gratitude for the sacrifices of those still serving and those who have served selflessly in our armed forces,” Distefano continued.

The two explained that the Economics building on campus opened in 1930 as CU’s student union building while also serving as a memorial building dedicated to student veterans who served and died in WWI. In 1947, Rep. Knous of Colorado proclaimed the building to be the official state memorial of Colorado. In 1953 the UMC opened and became the new memorial building.

“Without their service and dedication to our nation, our freedom and liberties would not be as secure as they are today.”

Stew Elliott, director of Veteran and Military Affairs and a U.S. Navy SEAL veteran, brought the cost of war to the attention of the audience. Elliott spoke about the Arlington National Cemetery, a cemetery housing the gravestones of many U.S. veterans.

“More than 150 years of history can make the wounds of war seem distant, even ancient,” Elliott said. “But I would only suggest that you visit Section 60.”

Section 60 of the cemetery, Elliott said, contains the graves of veterans who have died in “America’s most recent and current conflicts in the Middle East.”

“In Section 60 it is not uncommon to see a grieving parent, a mourning spouse, or a tearful child of one of America’s heroes,” Elliott said. “It is then that you will immediately realize that the men and women of today’s military continue to pay the highest price.”

Elliot said that at a time when “some will tell you America’s values and resolve have weakened” it is important to reflect on the nation’s families that have produced men and women with “an instilled sense of duty.”

“This Veterans Day, please take a moment to reflect on the unity that truly defines this experiment in freedom and democracy we call the United States of America,” Elliot said.

Audience members with veterans in their families found the day of celebration particularly personal.

“Almost everyone (in my family is) a veteran or is in the armed services or has been, so it’s a big part of my family,” said junior political science major Tadija Ilic, who said all five of his grandfathers are veterans.

Another attendee, freshman sociology major Grace Pearson, has a veteran father and receives assistance under the GI Bill. Pearson expresses “a lot of thanks for all of the military people who are serving now or have previously served or aren’t here with us today.”

“There’s a lot of gratitude I feel not given, but this is definitely a day that all that gratitude can be given,” Pearson said.