Buffs volleyball breaks through with Pac-12 win against Arizona 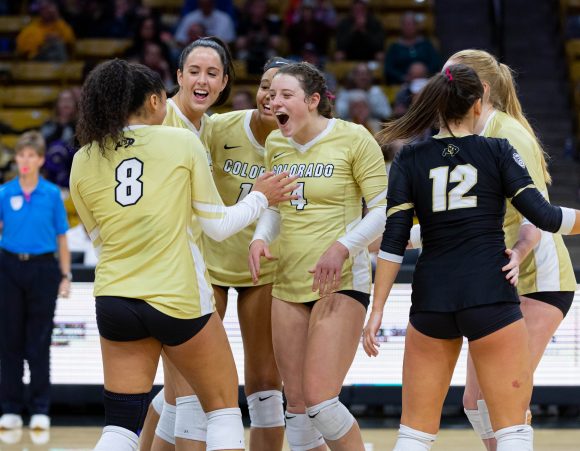 The CU women’s volleyball team congratulates one another after scoring a point against the Washington Huskies during a game on Oct. 27, 2019. (Casey Paul/CU Independent)

The University of Colorado Buffaloes volleyball team took to the court on Friday, looking to win their first PAC-12 game of the year against the University of Arizona Wildcats. The Buffs prevailed in five sets, snapping a 10 game losing streak and winning their first conference game of the season. Colorado improves to 9-12 on the season, while Arizona drops to 12-11.

Behind a loud crowd at the CU Events Center, freshman outside hitter Elissa Alcantara had a dominant night, finishing with 23.5 points, 22 kills and a 0.425 hitting percentage. Head coach Jesse Mahoney praised the freshman after the game.

The Buffs came out of the gate swinging, taking an early 5-0 lead in the first set, but the Wildcats stormed right back, tying the set 6-6. The game remained close but the Buffs never fell behind. They finished strong and closed with a 25-21 win. Alcantara led the team with 4.5 points in the first set.

The second set started much like first as each team exchanged two-point leads. The turning point saw the Buffs climb to a 15-9 lead and they never looked back. Colorado dominated the rest of the set, closing the Wildcats out 25-18. Alcantara shined bright in the set, leading the dominate Buffs’ offense.

The third and fourth sets proved to be the most competitive as the sets went back and forth. Arizona won the hard-fought sets 25-23 and 25-22 respectively. But even after losing two sets straight, senior libero Rachel Whipple never lost sight of the winning mindset.

“I was just really proud of our team for not giving up tonight,” Whipple said. “We could have just folded and crumbled after they won the third and fourth set but I am super proud of us for coming out in the fifth set and giving it their all.”

The match went to a decisive fifth set with Colorado pulling out the win by a score of 15-11. Mahoney urged the importance of consistency throughout the match.

“We can do a lot of really good things,” Mahoney said. “We just have some lows that we have to kind of find a way to get out of and that’s what we are working on every day.”

A lot of improvements were made by the Buffs tonight but Mahoney believes there is still room for more. Colorado will look to use the win as motivation to keep getting better.

The Buffs will finish the weekend and homestand against Arizona State Sunday, Nov. 3 at 1 p.m. MST.