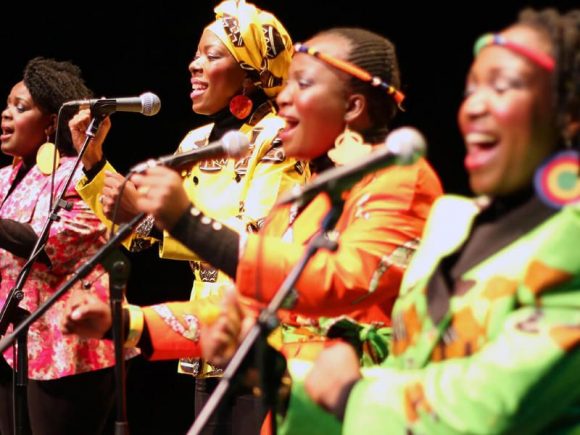 Following the release of their third album “Obabes beMbube” (“Women of Mbube”), Nobuntu set out on their second U.S. tour through 19 states over nine weeks, including a stop in Boulder. Zanele Manhega, the quintet’s speaker, joked that the Boulder weather shocked the Zimbabwean “sun babies” who performed in Texas a few days before. She promised the audience Nobuntu would be “taking you all with us” to warm, tropical Zimbabwe.

The quintet opened with “Silele,” a song about a spiritual healer from their newest album. This was followed by older songs, including “Uthixo,” a call to their religious creator and “Cry Song,” a song taking a stand against abuse.

From the first notes, the quintet had a magnetic stage presence. Their striking outfits filled the stage with colors. The singers wore distinctive ethnic garb, each showing the style of a different Zimbabwean tribe. The elegant dresses ranged in colors and styles, from a marigold orange dress to a silky black dress with a canary yellow shawl to a gold-sequined navy blue corset with an ornate triangle headpiece.

Their joyful, velvety voices melted together, gliding between colorful dissonance and dolce consonance with ease. Their mbube style combined call and response, vocal calls and whistles with rich a cappella harmonies. They exploded into movement, gesturing grandly with their arms and dancing in harmonious synchronicity, only coming to rest briefly between songs.

Showing their cross-genre skill, Nobuntu performed several covers including the mbube song “The Black President,” honoring Nelson Mandela, and the iconic “Amazing Grace.” Their rendition of “Amazing Grace” began with a single vocal line, which split into graceful harmonies before launching into true mbube style with playful syncopation and an echoing chorus overplayed with silky fragments of the verse.

Nobuntu, fond of showmanship, knew how to use silence to control the audience. This was especially apparent in their song “Obabes be Mbube.” The five women poised motionless for nearly a minute, wearing dazzling smiles until the audience’s shouts escalated, and they relented with the final belted lyrics. Later, they led the audience in a fun call and response, where Heather Dube taught the audience how to perform vocal clicks while singing. Playing the part of the unimpressed teacher, she shook her head in disappointment when the audience couldn’t reproduce a complex, circuitous melody. She drew chuckles and increased effort from her eager listeners.

The second to last song, which translated to “War,” featured a dancing solo by each member of Nobuntu.  Bursting into dynamic, rhythmic dance, the dancers moved with loose freedom. Each dancer brought her own twist to the set pattern, ending with a high kick.

With the encore of Ladysmith Black Mambazo’s “Diamonds on the Soles of Her Shoes,” a classic mbube song, singer Duduzile Sibanda’s promise of “bringing the sun” certainly came true. Despite the frigid temperatures outside, the mellifluous final vocals spread the warmth of Zimbabwe to Macky Auditorium.