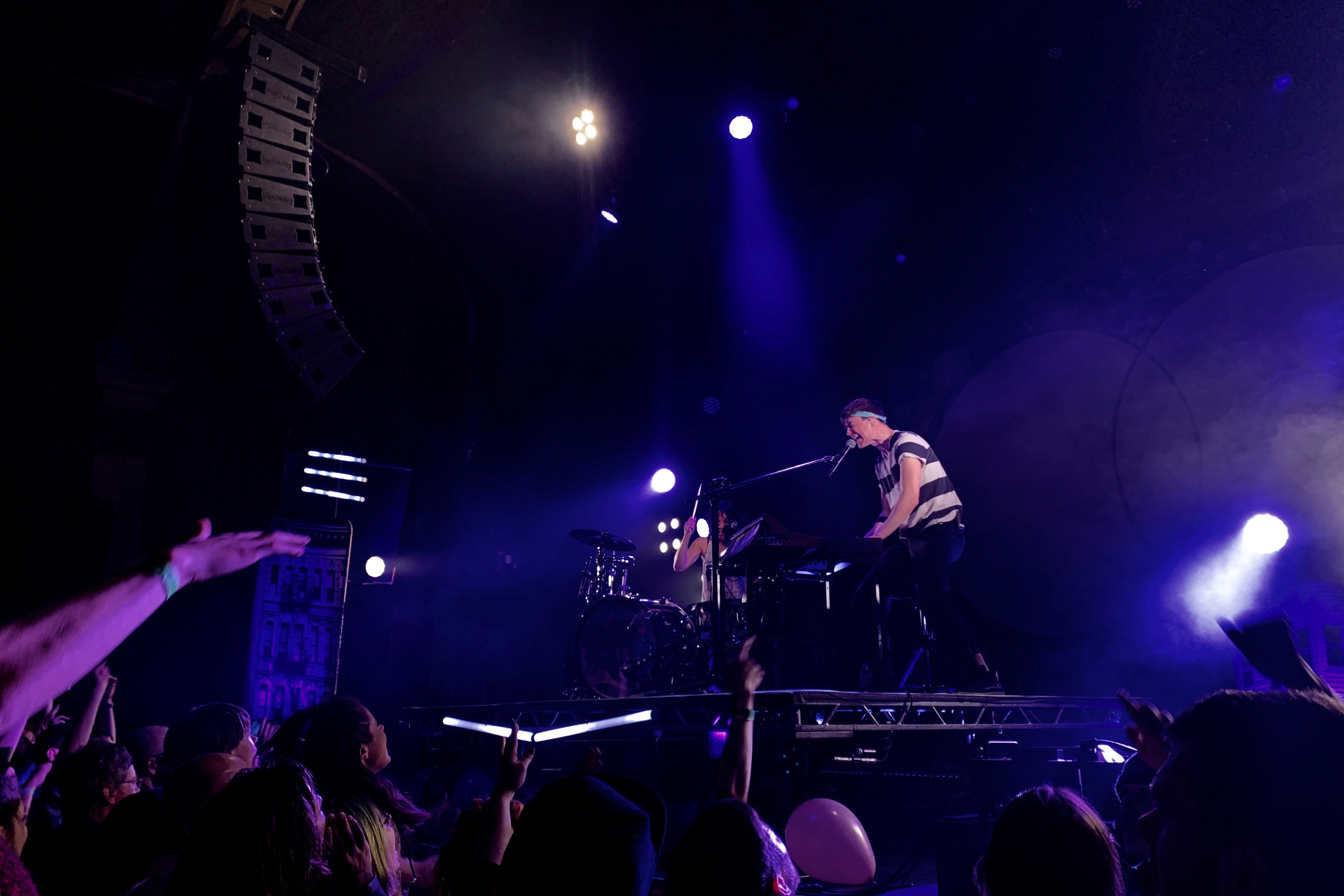 Matt and Kim brought chaotic energy to the Ogden Theater Tuesday night. The night lent itself more to the atmosphere of a college party than a traditional concert as they filled the theater with confetti and balloons and used sex toys as instruments onstage.

A decade after Matt Johnson and Kim Schifino first had a hit with “Daylight,” the Brooklyn duo has put out infectiously danceable songs, hallmarks of their spirited work. On Tuesday night, their discography of loud, upbeat music burst to life.

The charismatic duo began their set by dancing their way onstage to a mashup of Black Sabbath’s “Iron Man” with Kanye West’s “Mercy,” an idiosyncratic mixture which proved to be a trademark of their show. They immediately jumped into a rendition of “Daylight,” one of their most well-known songs, prompting the audience to sing along to Johnson’s vocals and dance to Schifino’s frenetic drumming.

“I knew from day one Denver was fucking crazy,” Schifino said, prompting a deafening cheer from the loyal audience who the performers traded energy with.

The night’s program centered itself around a 10-year anniversary and fan appreciation commemoration of their breakout album “Grand.” Johnson’s electric keyboard held a camera lens that captured a panoramic view of the Ogden’s floor. 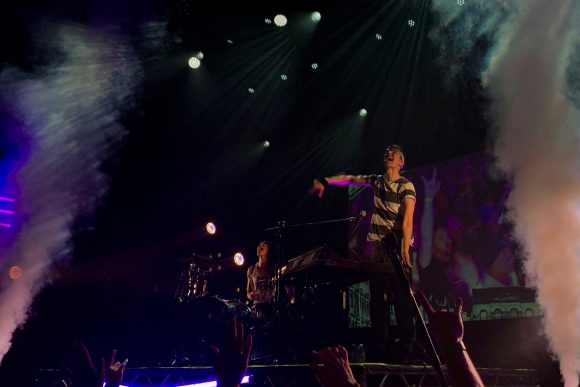 “Our show has never just been about what’s happening up here,” Johnson beamed, as he gestured to the fan-filled screen behind him.

They intertwined their performance with spontaneous dances to an eclectic mix of Major Lazer, DMX and DaBaby samples, which the moshing audience belted out. At one point, an audience member threw a bra onstage, which Schifino proudly sported. She then drummed — using two large sex toys — to “Don’t Slow Down,” an anthem Johnson claimed WWE fighter Rhonda Rousey “considers her fight song.”

Both performers channeled punk-rock energy. Schifino often stood on top of her drum kit alongside Johnson, who treated his keys equally as furniture, jumping up excitedly as he played. Johnson fumbled on his words when he spoke to the crowd and laughed as he belted out lyrics, symptoms of the duo’s unfettered joy for performance. After 15 years of songwriting and a decade of stardom, the novelty hasn’t worn off. 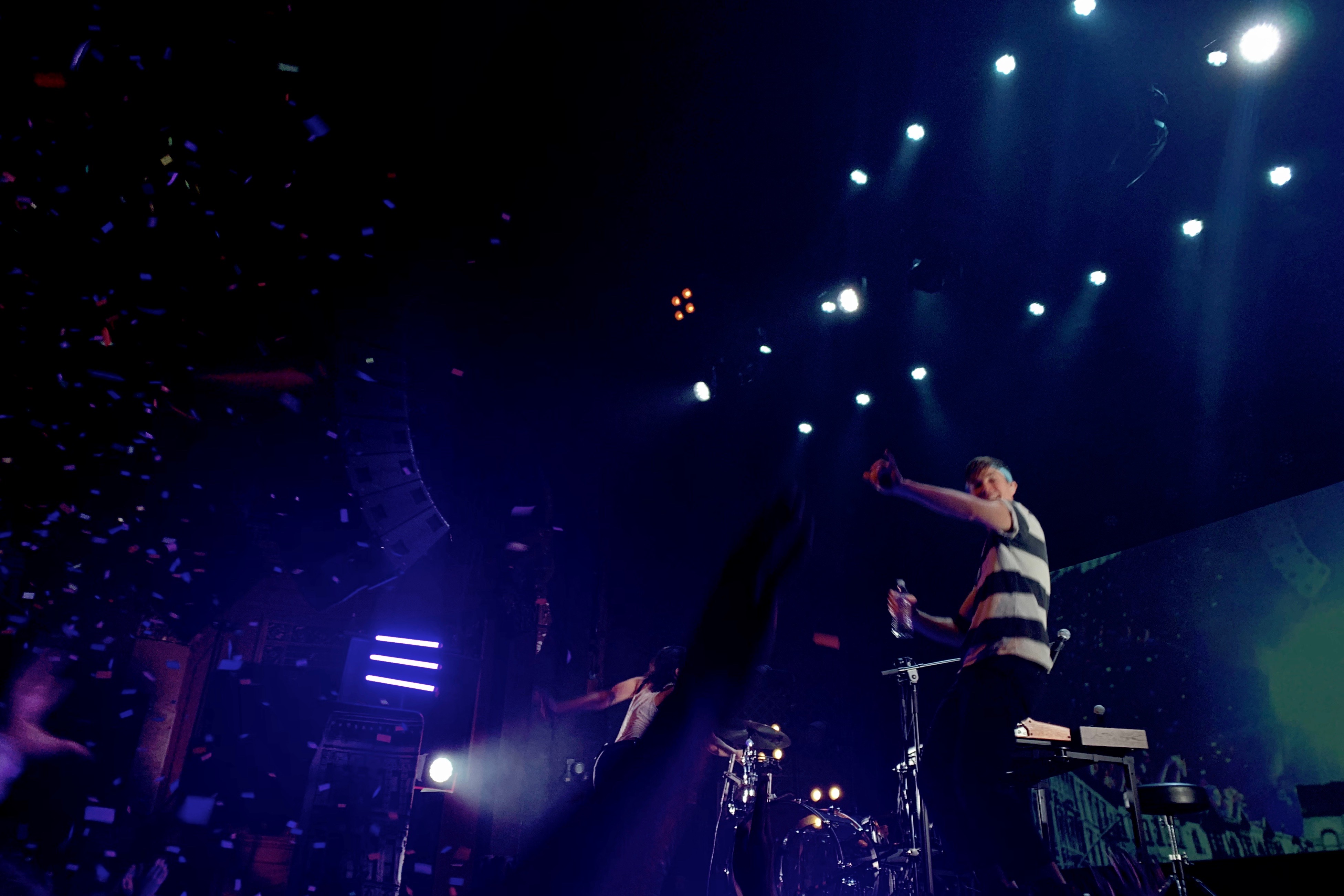 Matt Johnson dances after throwing confetti down onto the crowd at the Ogden Theater. Tuesday, Oct. 29, 2019. (Ben Berman/CU Independent)

After concluding “Grand,” they closed with renditions of fan-favorites “Get It” and “Block After Block” before playing a new song “GO GO.” The crowd sang along with ease. In the show’s most electrifying moment, Johnson tossed out hundreds of rainbow balloons into the audience, bringing a cascade of color over the crowd.

“Let’s Go” served as the night’s final song, and Johnson blasted the crowd with confetti cannons. Words from the song’s chorus flashed onscreen: “Say what you wanna say / Make it mean everything.”

After transitioning from house shows in Brooklyn to packed venues full of thousands of dedicated fans, Matt and Kim have zero interest in switching up their joyously off-kilter approach. After showcasing promising new music and an electric crowd that reacts as the Ogden did, why should they?