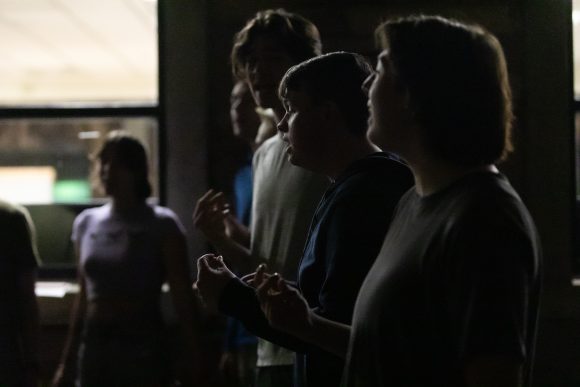 After practicing in Hellems 255, the Buffoons routinely made their way to the campus Arches. They performed numerous songs to the few onlookers walking past through University Memorial Center, their voices complimented by the echoing structure. Wednesday, Sept. 27, 2022. (Io Hartman/CU Independent)

The CU Buffoons, the oldest a cappella group at the University of Colorado Boulder, recently became gender-inclusive after nearly 60 years as an all-male group. The group now welcomes people of all gender identities who sing in the tenor and bass ranges. This shift came partially in response to their member, Blake Fields, coming out as a transgender woman last year.

“We’re definitely moving toward a very inclusive environment in the group,” said Fields, the treasurer for the Buffoons. “As the only girl currently in the group, I’m very happy to be a part of the leadership [team]. I think being in this position will help me influence the current leadership and the group as a whole to be more inclusive.”

For over a decade, the Buffoons have technically been open to all students; however, the lack of gender diversity in the group tended to discourage women and non-binary people from joining.

“Typically, in the past, the group appealed more to male students to join,” Fields said. “Now, we advertise ourselves in a more inclusive way.”

This year, the Buffoons welcomed five new members, including M. Jordan, a non-binary freshman who uses they/them pronouns. For Jordan, who previously struggled with the lack of inclusivity in high school choirs, the group has offered a much-needed musical safe space during their first semester at CU.

“The community has been amazing,” Jordan said. “They’re all really welcoming and genuinely do care about my gender identity and want to make sure I feel comfortable there. It’s definitely the highlight of my week.” 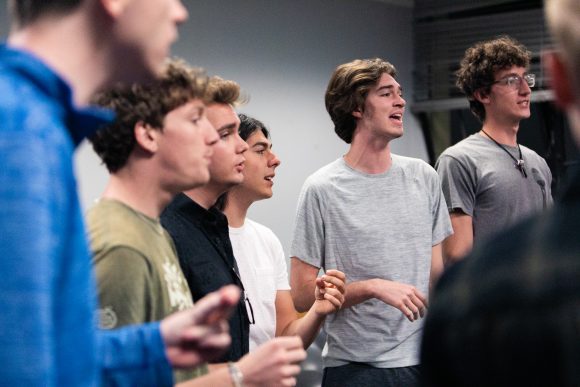 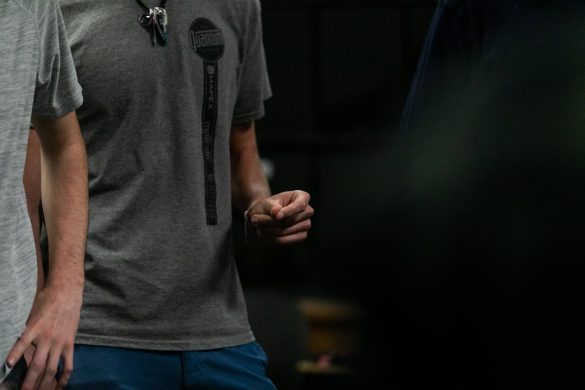 The Buffoons snapped as they practiced singing Drifted Away during their Wednesday night practice on Sept. 27, 2022. (Io Hartman/CU Independent) 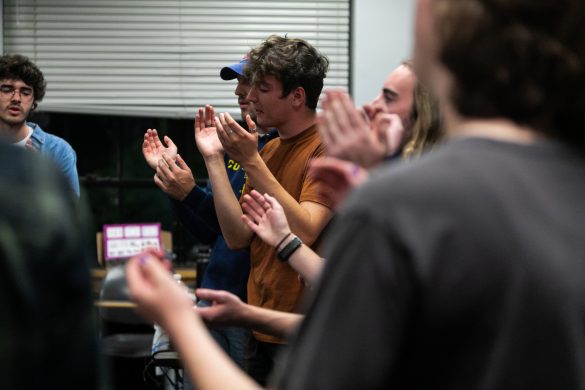 The Buffoons clapped to add sound to their rendition of Drifted Away during their Wednesday night practice on Sept. 27, 2022. (Io Hartman/CU Independent)

The Buffoons are one of seven a cappella groups on campus. Most groups are open to all students regardless of gender, though two gendered groups remain, In the Buff Men’s A Capella and the all-female CU On the Rocks.

Founded in 1962, the Buffoons have a long history on campus. Two CU undergraduates, Don Grusin and Roger Nelson, decided to form the group under the encouragement and guidance of Dr. Oakleigh Thorne, the former musical director of Yale University’s Whiffenpoofs. In 1954, Thorne moved to CU Boulder to pursue his doctorate in biology. In the early 1960s, he brought the Whiffenpoofs, the nation’s oldest a cappella group, to perform in Boulder for two consecutive years. These performances inspired Grusin and Nelson to found the Buffoons, named after CU’s mascot.

One year later, in 1963, the Buffoons recorded their first LP, “Songs by the CU Buffoons.” Since then, the group has recorded over a dozen albums. Their arrangements cover a variety of genres and eras — including classic rock, blues, R&B, soul and pop — from Stevie Wonder to the Red Hot Chili Peppers to Fleet Foxes. “The Great Debate,” an original song from their 2012 album “Under the Arches,” was selected for the Voices Only and Best of College A Capella, two major annual college a cappella compilation albums. 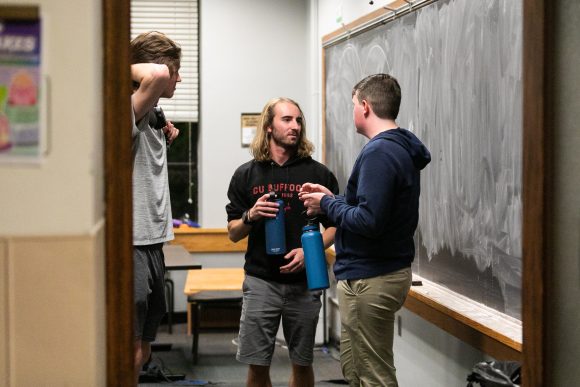 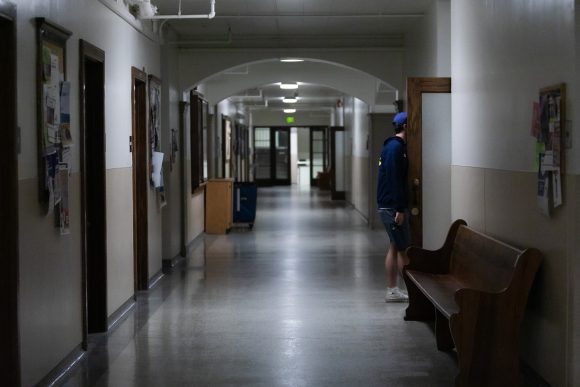 Steven Langer, a member of the Buffoons, stands at the door of Hellems 255 while discussing audition decisions before heading towards CU Boulder’s Arches during their practice on Wednesday, Sept. 27, 2022. (Io Hartman/CU Independent)

Over the past six decades, beyond making music together, the Buffoons have focused on fostering a close-knit community for current members and alumni. For example, they host Camp Foon, an annual camping trip in the Rocky Mountain Highlands, to initiate incoming freshmen into the group. To stay connected with alumni, they hold reunions at least every five years. This season, they will celebrate their 60th reunion with several alumni events in late October during CU’s Homecoming Weekend.

“It’s a tight-knit community when you’re in the group, and then it becomes this expansive network of people [after you graduate],” said Steven Langer, the PR representative for the Buffoons. “Anyone who is a Buffoon or will be a Buffoon is family at this point.”

Though historically a boys’ club, now the Buffoons’ a cappella “family” has expanded to be more diverse and inclusive. This reflects the shift toward gender integration taking place in many a cappella groups across the country, including Yale’s Whiffenpoofs, which became co-ed in 2018. However, as a tenor and bass-only group, this transition requires a focus on inclusivity in several ways — from dress code to language used during rehearsals.

“The group members were all very good with me personally [about using the correct pronouns],” Fields said. “But when it came to addressing the group as a whole, they tended to use terms that are traditionally gendered toward males, such as ‘Alright, boys!’. I had to remind them to make an effort to change their language to be more inclusive.”

However, despite the challenges they have encountered along the way, the Buffoons remain committed to creating a safe, supportive environment for singers of all identities and backgrounds on campus, as well as to challenging the long-held gender stereotypes of the a cappella tradition.

“Tenor is just a vocal range,” Jordan said. “Not only men can sing in the tenor range. It’s possible for other people to do it too. It’s good to be able to deconstruct that. It’s a huge step in making people who aren’t cisgender or are genderqueer feel more welcome for who they are.” 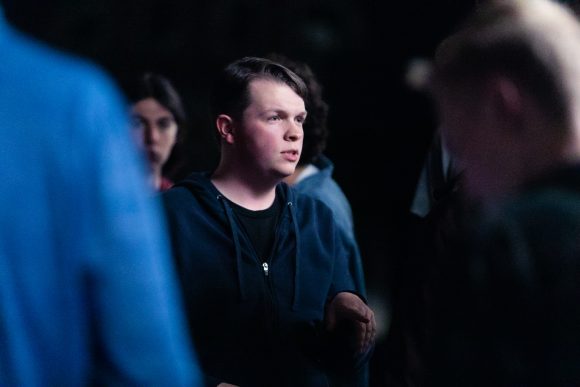 Max McCord leads The CU Buffoons as they sang under the UMC’s Arches on Wednesday, Sept. 27, 2022. (Io Hartman/CU Independent) 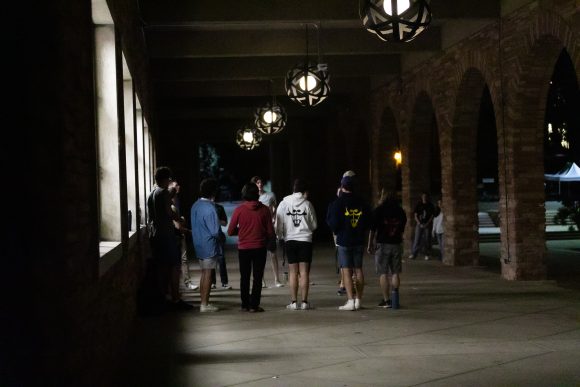 Most Tuesday and Thursday evenings from 8:30 to 9 p.m., the Buffoons can be found singing under the archways of the University Memorial Center near the plaza — a long-standing tradition since the 1990s.