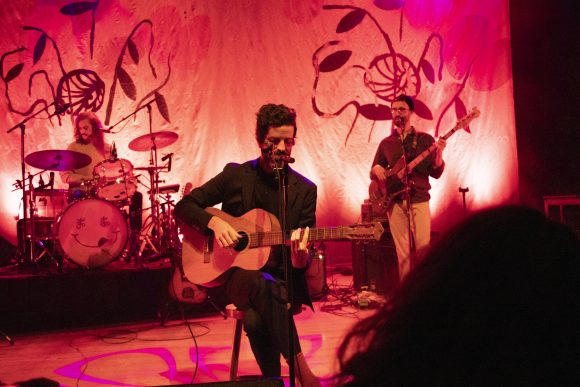 On Oct. 30 Devendra Banhart, purveyor of weird bilingual folk music, headlined the Boulder Theater on the tails of his latest album, “Ma.” The crowd, energized from a restful snowstorm and the promise of Halloween, welcomed Banhart’s own sprite-like gestures, playful jokes and expressive vocal techniques.

Opening for the Venezuelan-American artist was Black Belt Eagle Scout, a four-piece outfit led by Katherine Paul. Paul’s ethereal vocals and plugged-in guitar-shredding proved goosebump-inducing, particularly on the track “Indians Never Die,” which the singer prefaced with the proclamation, “You cannot kill us.”

Banhart’s performance was backdropped by a large canvas tarp inspired by the album art from “Ma,” drawing slight artistic ties to a modified Mattisse. Logically, he opened with “Is This Nice?”, the sweet and lulling first track on his latest work. As the night went on, Banhart confessed his affinity for Boulder as he pranced across the stage, adjusting his trousers—which could have benefitted from a belt.

“Boulder is the only place on tour that we go where I consistently say ‘sh*t, I wished I lived here,’” he said.

Banhart’s father, he told his fans, learned to meditate under the Flatirons as a student of Naropa University in the late 1970s. Having last played the Boulder venue in 2016, the show became a sort of homecoming for the musician, whose eccentric dance moves and manner he self deprecatingly labeled as “so Boulder.”

The band played a satisfying set with songs drawn from the depths of Banhart’s discography— including an audience requested teaser of “Sea Horse” from 2007’s “Smokey Rolls Down Thunder Canyon.” By lilting his voice and body from love songs to disco and bastardized bossa nova, Banhart showed his virtuoso.

Throughout the night, it became clear that Banhart makes music for a variety of recreations, such as: sipping your espresso, weeping, making love, boogying and tip-toeing in your slippers.

In the middle of the performance, all band members abandoned the stage, and only the drummer, Gregory Rogove, remained. He delighted the audience with a jazzy and frenetic drum solo which grew into a swift and experimental escapade. The keyboardist, dressed in all white, joined in with what looked to be a metallic, gold leaf topiary. This sort of whimsy, also evident in his comedic ramblings, musical range and overall physicality, is a touchstone of so much of Banhart’s music. His performances offer insight into why, after making music for 20 years, he endures.

His popularity may also be due to his seeming generosity. One dollar of every ticket sold for the evening was donated to the organization World Central Refugees, whose mission is to provide hot and nutritious meals to indigenous refugees from Banhart’s home of Venezuela.

The evening closed with a gracious encore and a typically non-sequitur message from Devendra Banhart himself: if you didn’t like the songs, go out and buy someone socks who doesn’t have any.