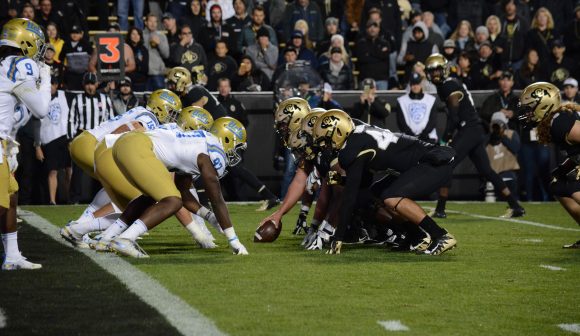 UCLA defense and Colorado Buffaloes offense line up at 2nd and goal as the Buffaloes go for a touchdown. Sept. 28, 2018. (Robin Fox/ CU Independent)

Coming fresh off of a four-game losing streak, the Buffs will look for a change in momentum against the Bruins this Saturday. CU’s offense has seemed like a bird learning to fly this year, often soaring high but also crashing down to Earth at times. Two back-to-back abysmal performances against Oregon and Washington State, three points and 10 points respectively, gave great cause for concern. However, the Buffs were also the first team to put up more than 30 points against a stout USC defense in last week’s close loss.

Of course, a baby bird isn’t the most inspiring comparison for an offense led by senior quarterback Steven Montez. That being said, last week’s performance should be cause for hope, as junior wide receiver and key playmaker Laviska Shenault Jr. seemed to get his proverbial groove back. Shenault caught a season-high nine passes for 172 yards and one touchdown. The receiver hadn’t broken more than four passes since a September loss to Air Force and looked as comfortable in the Buffs’ offense as ever. Against an unspectacular Bruins defense, CU is poised to break their four-game landslide in Pasadena.

Giving up a 31-21 lead in the fourth quarter against USC was not a good look for the Colorado defense. The Buffs did hold a powerful USC offense to 14 points in the first half but ultimately were not able to stop USC wide receiver Michael Pittman when it mattered most. The bottom line is that the CU Buffs have now allowed 30 or more points in 13 consecutive games and I don’t think this streak is going to end against a UCLA team that is coming off two straight wins against Pac-12 teams.

I do believe that the Buffs’ defense will put up a good fight against a UCLA offense that put up a combined 76 points over their past two games. CU will be counting on junior defensive lineman Mustafa Johnson and the rest of the defensive line to have a bounce-back game against UCLA. Ideally, the squad will look to put some pressure on quarterback Dorian Thompson-Robinson who has looked comfortable in the pocket and has extended plays with his legs quite frequently. In order for Colorado to have a chance against UCLA, graduate safety Mikial Onu and the entire secondary has to tighten up their coverage.

Coming off of a brutal loss to USC, I do think that the Buffs’ defense will be motivated to give it all they have against UCLA. They will still allow UCLA to put up points but I do think they will shut down their offense when it matters most.

Like most offenses, the success of the Bruins’ offense lies almost entirely on the play of their offensive line. Consistency upfront helped UCLA put up 34 points against Stanford and 42 points against Arizona State last week, both in winning efforts. The Bruins’ offensive line paved the way for senior running back Joshua Kelley against the Sun Devils, who found the end zone four times in the 42-32 victory. Freshman offensive lineman Duke Clemens started the Bruins late September matchup against Arizona and since then he’s led UCLA to impressive offensive showings, specifically on the ground.

UCLA quarterback Dorian Thompson-Robinson participated in practice early this week with a brace after suffering a knee injury early in the fourth quarter against Arizona State. Expect the Bruins to rely heavily on their running game to try to limit what should be a high-scoring, back-and-forth affair Saturday night at the Rose Bowl Stadium. Colorado has definitely improved its ability to stop the run. The Buffs will try to force UCLA to throw and get after the passer on third down. Creating turnovers has been the key for Colorado defensively and if it wants to do that Saturday, limiting Kelley’s effectiveness on the ground will have to be its first priority.

A tightly contested high scoring game will likely end similar to Colorado’s contest with Arizona, where the Buffs were unable to stop the run game late.

In past seasons, Colorado has not done well when the team heads west to face UCLA. The Buffaloes’ record versus the Bruins in Los Angeles (Rose Bowl and Coliseum) is 1-6. While CU will look to steal its second win in LA, the Bruins’ defense is hoping to continue their hot streak and push their record to 7-1 at home against the Buffaloes. The Bruins had a tough start to their season where the squad lost their first three games of the season and their defense gave up 92 points. Since then, the Bruins’ defense has been on a slightly upward trajectory that finally bore fruit in the past two games.

Two weeks ago versus Stanford, the Bruins’ defense took a big leap in progress by only allowing 198 total yards of offense and allowing just 16 points. Last week against ranked Arizona State University, while the Bruins allowed close to 400 yards and four touchdowns, those points came after the team took a strong 42-10 lead and many UCLA fans argue the yards came in “garbage time.” Furthermore, the Bruins stifled ASU’s running game as the squad held Pac-12 star Eno Benjamin to just 46 yards, averaging a meager 3.5 yards per carry. Colorado’s young running back duo of Alex Fontenot and Jaren Mangham will have their work cut out for them heading into LA.

While the Bruins record of 3-5 doesn’t scream success, the team has managed to win the last two weeks which is more than Colorado can say. I think it will be a tight game throughout, but UCLA will get the edge at home.

The Buffs-Bruins rivalry dates back to 1980 when the Bruins dismantled Colorado, 56-14. All-time, UCLA owns the series with a 10-4 record, but the Buffs are coming into Saturday with memories of their 38-16 victory a year ago.

So far in 2019, the Buffs have struggled through Pac-12 play with just one win. Colorado is currently suffering through a four-game losing streak and a heartbreaking 35-31 home loss against USC last week. Their 1-4 conference record puts them in the basement of the Pac-12 South with aspirations to turn things around with a much-needed win.

On the UCLA side, they are feeling pretty good with back-to-back wins beating Arizona State and Stanford. Head coach Chip Kelly’s Bruins are sitting right in the middle of the Pac-12 South and Saturday’s contest could either make or break their season.