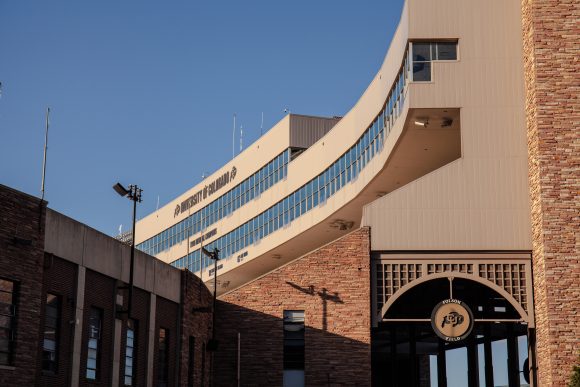 A view of the Folsom Field stadium in the late afternoon. (Alec Levy-O’Brien/CU Independent)

At Folsom Field, large banner advertisements promoting the sports betting company PointsBet’s slogan, “Do It Live,” are displayed across the stadium.

The University of Colorado Boulder drew national scrutiny in November of 2022 for its partnership with PointsBet, a relationship which included incentives to encourage sports betting in the CU community.

Last year, the New York Times reported the university received a $30 referral bonus every time someone signed up on PointsBet with CU’s promo code and placed a bet.

Following the controversy in November, university leaders moved to reevaluate their relationship with PointsBet. On Jan. 17, Steve Hurlbert, the university’s chief spokesperson, told the CU Independent the university had decided to discontinue the referral fee bonus going forward.

The rest of the deal remains largely unchanged.

The deal originally received significant backlash in 2020, as the first high-profile partnership with a sports betting company in college athletics.

“[At the time], obviously, we were concerned about the image that the partnership projected from a campus perspective,” said Seth Hornstein, the chair of CU’s Intercollegiate Athletics Committee. “CU was the first one to do this.“

Over two years into the deal, CU Boulder continued to see some backlash from community members, especially as sports gambling becomes increasingly popular among college students.

According to data from the National Council on Problem Gambling, approximately 67% of college students bet on sports, as well as 30% of male college athletes. Six percent experience a serious gambling problem.

The partnership initially gave the university a financial incentive to encourage gambling in the CU community. For every person who signed up with CU’s promo code, the university would receive a $30 referral bonus. The details of the bonus in the deal drew Hornstein’s attention.

“We were shocked and surprised about this,” he said.

Soon after the announcement in 2020, Hornstein and other members of the IAC met with Chancellor Philip DiStefano and Athletics Director Rick George to discuss potential amendments for this part of the agreement. Hornstein said they eventually persuaded university officials to use the referral bonus money for gambling addiction support resources and diversity initiatives on campus.

At the time, Hornstein believed this compromise would set an important ethical precedent for college sports betting partnerships.

“We felt it would make something good come out of the agreement,” Hornstein said. “Some of that money would be invested back into the university to help student-athletes and students, staff and faculty in general.”

In the years since this agreement, the referral bonus funding has been minimal. Last year, the total amounted to $1,830, said Hurlbert. This funding has been used for messaging directed toward gambling education and responsibility resources at Folsom Field and the CU Events Center.

From the student perspective, the most significant impact of the PointsBet partnership is the recruitment of CU students for internships and full-time positions at PointsBet. PointsBet regularly attends career fairs and alumni events to recruit business and engineering majors from CU for their headquarters in Denver. This process is supported by CU engineering and business faculty and staff.

This aspect of the partnership has raised questions about whether encouraging students to work in the gambling industry — which opponents say prioritizes profit maximization over the public health impact of gambling — aligns with the values of a higher education institution.

For at least some CU students and alum interested in a career in the sports industry, this partnership has provided them with valuable career opportunities. PointsBet, an Australian company with its U.S. headquarters based in Denver, is one of the leading sportsbook operators. Nineteen percent of American bettors regularly use the app, according to a 2021 survey by CivicScience.

Ben Friedman, a CU alum who graduated with a business degree in 2019, began working at PointsBet in 2020 thanks to a referral by Jessica Baumgarten, the director of the Business of Sports Certificate Program at the Leeds School of Business. Friedman is now the manager for platinum customer relationship management and service at the company.

Though Friedman said he has experienced “a bit of stigma” from working in the gambling industry, he believes “there are benefits of being able to bet on sports safely and legally with a company like PointsBet.”

PointsBet’s emphasis on responsible gambling is one of the main reasons why CU Boulder decided to partner with the company specifically, according to an initial statement in 2020 from George.

“When the athletics department decided to enter the space [of sports betting], we were encouraged by the amount of education PointsBet does about responsible gambling,” said Curtis Snyder, the assistant athletic director in the Sports Information Office.

Snyder said that university officials have not seen a reported increase in gambling addiction among students since the PointsBet deal.

While they may not intentionally target younger bettors, PointBet’s on-campus advertisements are visible to people of all ages attending CU sports events.

Though PointsBet says it adheres to responsible gambling practices, the sports gambling industry as a whole has significantly impacted many people in Colorado. This impact has led to increased rates of sports gambling addictions and problem gambling. According to early research by the National Coalition on Problem Gambling (NCPG), online sports betting leads to higher rates of problem gambling due to the ease of access and use.

From 2020 to 2021, the number of calls and texts to Colorado’s gambling addiction helpline reported increased by 45%,  according to Peggy Brown, the president of the Problem Gambling Coalition of Colorado.

Meanwhile, the historic lack of state funding for gambling addictions support programs in Colorado has placed even greater pressure on these programs as they deal with increased demands for assistance.

Since 2020, the state has allocated $130,000 annually for a 24-hour helpline and various other prevention and support programs. According to a 2016 survey by the NCPG, Colorado commits three cents per capita for these efforts, ranking 37th out of 40 states that provide public funding for gambling addiction support.

At CU, the IAC attempted to take additional measures to prevent student-athletes from facing this pressure on campus. In 2022, the committee passed an anti-gambling resolution, which recommended that the university create a policy restricting CU staff, students and faculty from betting on CU sports teams.

“We wanted to put the line in the sand that ethically, people should not be betting on their own student-athletes,” Hornstein said.

The Boulder Faculty Assembly approved this resolution in March of 2022. However, due to legal restrictions and limitations, university officials decided not to implement it.

Despite this setback, Hornstein remains optimistic about the IAC’s oversight of the athletics department going forward and its ability to negotiate with university officials. Yet, he also acknowledges the limitations of the committee’s work.

“Though Chancellor DiStefano is very receptive to our committee and how we can help, we have to acknowledge the realities of the world we live in,” Hornstein said. “We can’t always have a say in the what athletics department is doing from a business standpoint.”