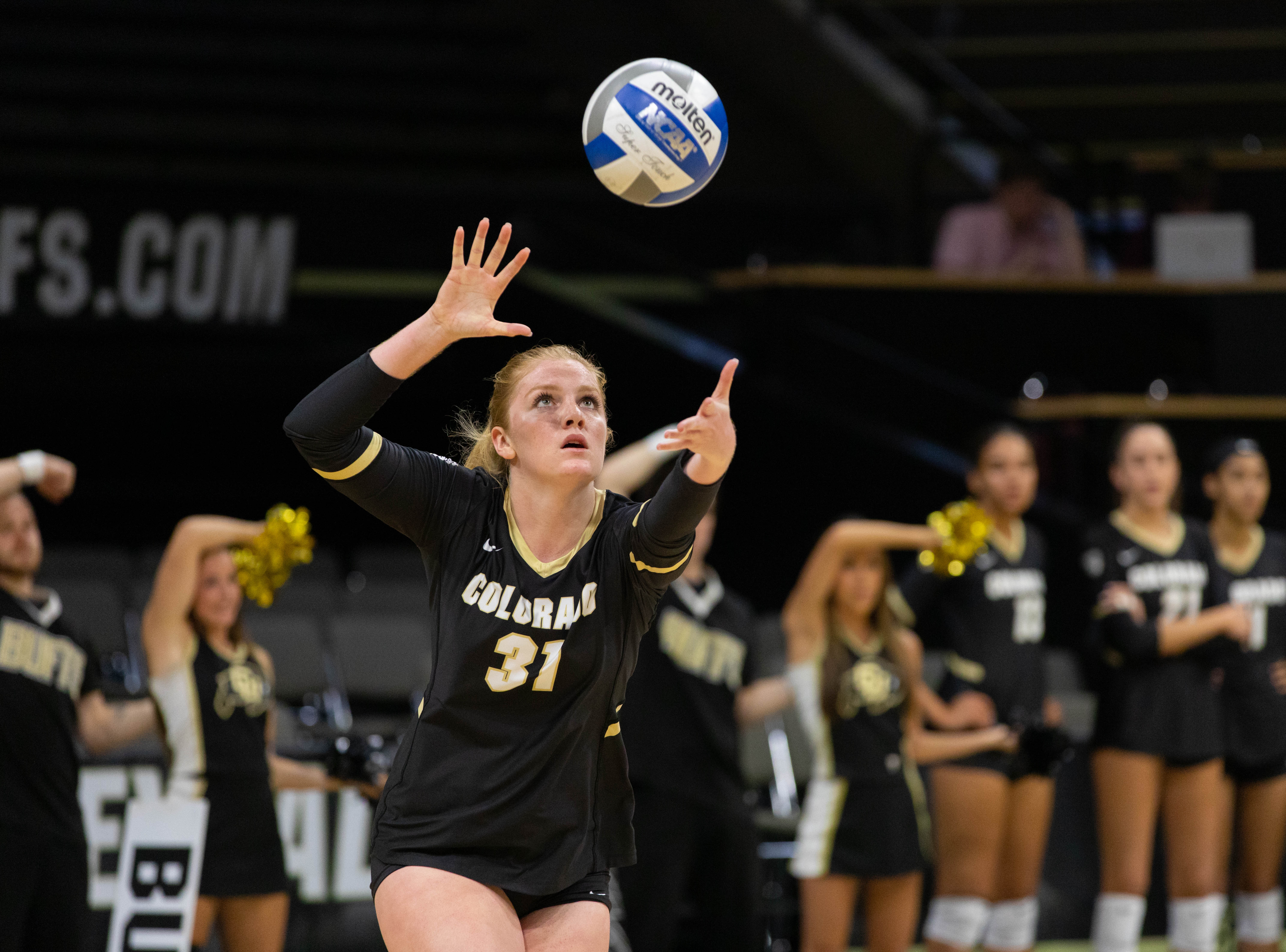 Freshman outside hitter Jill Schneggenburger gets prepared to serve the ball over the net. Sept. 21, 2019 (Casey Paul / CU Independent File)

The University of Colorado women’s volleyball team lost to the University of California Los Angeles Bruins in a quick three sets on Sunday. The loss extends their losing streak to six games in Pac-12 play.

The loss comes on the heels of CU’s Friday match against the University of Southern California, which head coach Jesse Mahoney saw as the turning point for the team. Unfortunately for the home fans, Colorado’s Friday momentum didn’t carry over.

“It was a frustrating match, especially after I felt like we had turned the corner on Friday night and played with some energy and focus,” Mahoney said.

The Buffs took the lead early but the score swung back and forth from there. There were four tie balls early on, then the Bruins pulled ahead. UCLA went on to win the set handily, 25-15.

“Everything we work on is important,” Mahoney said. “We have to get better in all phases.”

The second set proved to be more competitive, with the Buffs and Bruins staying neck-and-neck until the end. CU, just behind in score towards the end of the set, fought to take their first lead of the set, 21-20. While the Buffs remained in striking distance to win the set, they couldn’t finish in the end. Ultimately UCLA won the set 25-23.

“I felt like we had a little more energy in the second set,” said senior libero Rachel Whipple, who impressed with 18 digs. “We were playing with some more passion.”

Similar to the first two sets, the third started off close. Late in the set CU trailed by just one point, 18-17. Like the previous matches though, the Bruins finally pulled ahead and won the set 25-18.

Errors were a huge issue for the Buffs all game. The team allowed 16 attack errors, two blocking errors and two serving errors in just three sets. Also not beneficial was the fact that they hit negative on the left side. Mahoney gives credit to UCLA but ultimately blames the mistakes.

Not only is the team now 0-6 in conference play, but they are also 0-2 at home in conference play. The Buffs are in search of a solution before they hit the road for their next two games against Stanford and California. Mahoney hopes to see improvement before heading out to the west coast.

CU will play Stanford on Friday, Oct. 18 in Palo Alto as the team looks for their first conference win.