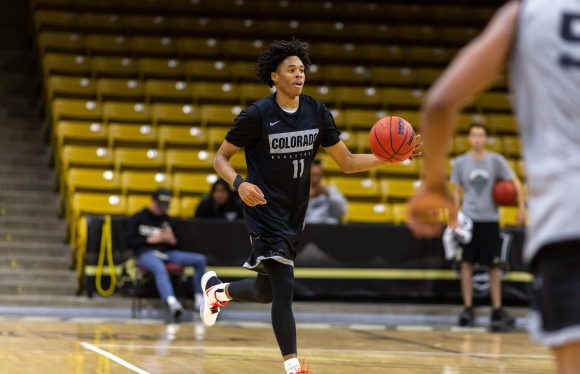 Freshman Keeshawn Barthelemy dribbles the ball down the court during the open scrimmage at the CU Events Center. Oct. 5 2019 (Kevin Wu / CU Independent)

The University of Colorado men’s basketball team held their first open practice and scrimmage of the season Saturday at the CU Events Center. A scattered crowd welcomed a few new Buffs to the team.

CU suited up in black and silver practice jerseys and played three 10-minute periods. The first period saw the first and second teams split up with the next two following a mix of expected starters and bench players.

“I thought we did a great job of taking charges,” Boyle said. “But on the other hand, we (have) to play off two feet and not put ourselves in a position where we’re leaving our feet and letting them take a charge on us.”

“A lot of people showed up,” Daniels said. “I’m excited for the year. (We) got one more month to prepare and got a lot of things to work on, but also, I feel like we are all picking things up well.”

Another new face in Boulder is freshmen guard Keeshawn Barthelemy, who hails from Montreal, Canada.  Barthelemy didn’t lack confidence during the scrimmage and displayed his basketball instincts throughout. Boyle was excited for the high-ceiling of Barthelemy.

“He’s going to be great,” Boyle added. “Keeshawn is special. I think he’s awesome … He’s got what it takes.”

“(I’m looking to improve) my shot and my body,” Barthelemy said. “Just getting in the weight room, just getting stronger, and everything else will come.”

The Buffs will look to start their season off strong with two additions in Daniels and Barthelemy. CU will open up against Pomona-Pitzer at the CU Events Center on Saturday, Oct. 26 at 1 p.m. MST.