Opinion: Your K-Cup coffee habits are damaging to the environment 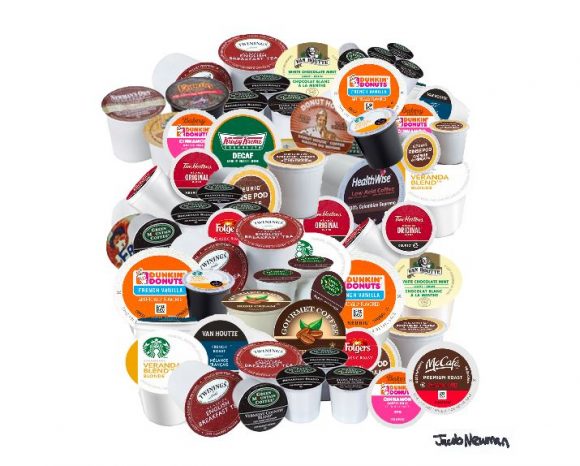 The cup clicks into place, the lid closes and like magic, you now have a cup of coffee. Who wants to take five-plus minutes to brew a hot beverage when a Keurig can get it done in 30 seconds? The convenience of Keurig is attractive and its popularity in the United States is undeniable, with 16% of homes across the country owning a device. But Keurig Cups’ (K-Cups) single-use plastic makeup continues to add to the current climate crisis.

Plastics are created using fossil fuels and emit greenhouse gasses throughout their lifecycle. Most plastics break down into microplastic which causes toxicity in water and can be mistaken as food by wildlife. K-Cups are not biodegradable or recyclable and can take up to 500 years to decompose. Each year 10 billion K-Cups are manufactured, which is associated with billions of cups being left in landfills due to the lack of accessibility for decomposition. Yet, college students continue to purchase this harmful product.

The creator of Keurig, John Sylvan, even said that he regrets his invention.

“I feel bad sometimes that I ever (invented the K-Cup),” Sylvan said. “I don’t have one. They’re kind of expensive to use. Plus it’s not like drip coffee is tough to make.”

Eventually, Sylvan sold his shares and now has no say over the choices of the company, resulting in little environmental progression.

Even with clear evidence of the damage that K-Cups are inflicting and disapproval from its creator, sales continue to rise, especially on college campuses. In 2014 Keurig announced its “College Tailgate Tour” which involved visiting 30 different campuses around the U.S. At the same time, Keurig released the Mini Plus Brewer which is small and can easily fit into a dorm room. The brewer was then customized with school logos which targeted students wanting to show their school spirit.

Despite being ranked in the past as one of the top ten most sustainable schools, the University of Colorado Boulder is riddled wit K-Cups throughout campus dorms.

“I use a Keurig here, I don’t at home,” said CU freshman Katie Pelligrini. “I know they’re bad for the environment, I feel bad about it. I don’t have a better alternative. I have no transportation to get coffee grounds and no way to wash the reusable cup.”

A reusable K-Cup filter offers a solution to all of the trash left behind from disposables. Additionally, switching to reusable K-Cups can save coffee drinkers a lot of money. Pound for pound there is a $30-$40 difference in ground coffee and K-Cups. For coffee consumers who enjoy the immediacy of K-Cups, and the precise measurements, the reusable cup is a perfect alternative.

“I don’t drink coffee, I use the reusable cup for tea,” said CU freshman Lindsey Neukirch. “But I (do still) use the hot chocolate pods. I try not to use them when I can, but it’s easy to use them in my dorm.”

The problem is that Keurig knows how to market and they do it well. Their mission statement reads, “A Keurig brewer on every counter and a beverage for every occasion.” So what about the beverages that cannot be replaced by the reusable cup? Those simply get ignored and are placed in the category where convenience outweighs environmental impact.

Keurig uses the convenience of consumers as a crutch and in the process, the company has produced enough cups to circle the globe 30 times. Billions of used plastic pods now fill landfills. Still, each day more cups are being produced. So if you find yourself asking if investing in a Keurig is a good idea, remember that drip coffee is still easy and delicious.