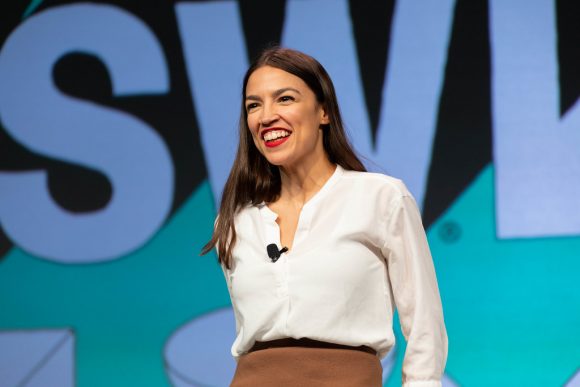 “Eighty-five percent of our carbon emissions have happened since WWII,” Ocasio-Cortez said. “We have brought ourselves to the brink of an unsustainable planet in one generation and we only have one generation to fix that. Incrementalism right now, when it comes to climate, is to be a frog in a pot of boiling water; when you get used to one temperature higher, one degree higher, another degree higher until you’re cooked.”

The crowd held many climate activists, including Thomas Lopez Jr., a member of the International Indigenous Youth Council, who helped organize the climate strike in Denver on Friday.

In recent years, activists have sought to open the conversation around climate change to incorporate social and economic injustices also. For Lopez Jr., it is important for indigenous people, people of color and marginalized communities to have a leading role in the fight for climate justice.

“It’s really awesome to see a brown woman in a place of power because so often brown and black women have their voices taken from them,” Lopex Jr. said. “For that to be seen, and for that to be so strong and so powerful is really inspiring and shows that this country really is headed in a different direction.”

In Ocasio-Cortez’s closing statement, the New York representative said that people need to focus on the “producers and not the consumers” in order to create systemic change.

“The most sustainable actions we can take are in voting and in educating our friends and family,” Ocasio-Cortez said. “Those are some of the most low-carbon, high-impact activities that we can pursue. It’s not an accident that the moment we proposed the Green New Deal the opposition came with this, ‘they’re gonna ground all the airplanes, they’re gonna take away our hamburgers, no more ice cream for everybody.’ This is the idea that the climate crisis is because you’ve had too much Ben and Jerry’s. That’s what they want you to believe.”

Ocasio-Cortez urged the audience to recognize that though making small sustainable changes is important, the real problem is rooted in the handful of corporations responsible for 70% of emissions. She called the “whole conversation about straws and hamburgers and ice cream” a tactic to make consumers think that climate change is about “Ben and Jerry’s and not Exxon Mobile.”

Many in the audience appreciated the representative’s honesty about the issues.

“I feel like (Ocasio-Cortez) gives us hope, but she also stresses the urgency in this,” said University of Colorado Boulder ethnic studies professor Joanne Belknap.