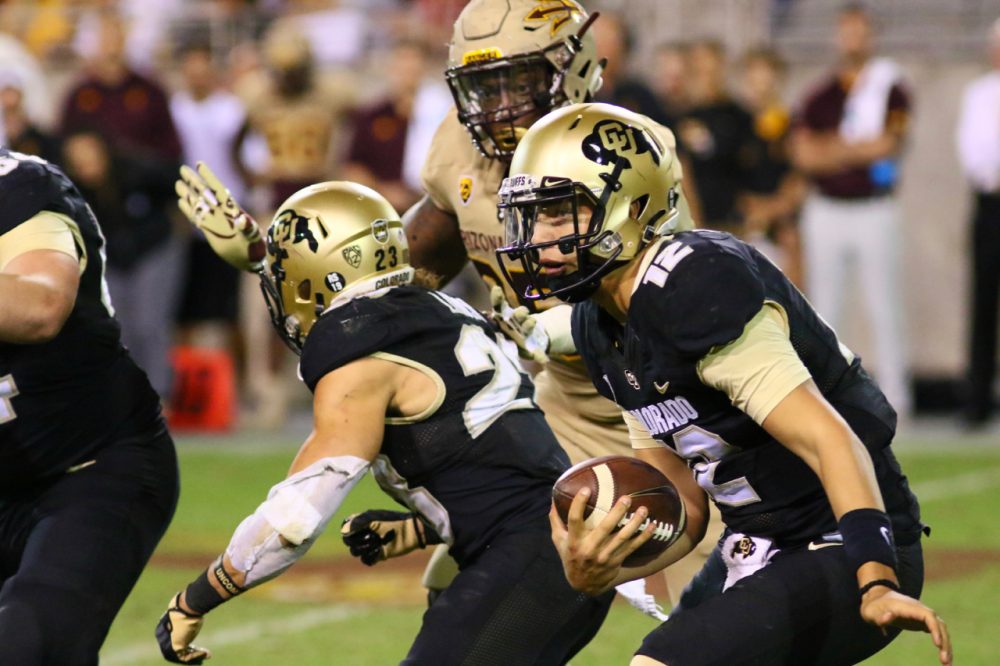 Steven Montez looks to juke out the ASU defense during the third quarter of play at Sun Devil Stadium. Nov. 4, 2017 (Nigel Amstock/CU Independent)

Pac-12 play is upon us and the University of Colorado Buffaloes football team will start things off against the No. 24 Arizona State Sun Devils in Tempe this Saturday. Colorado is coming off a devastating loss against Air Force, and the Sun Devils are riding high, conquering No. 18 Michigan State last week. Here’s our staff run-down of our weekend predictions:

Last week, after Mel Tucker’s Buffaloes lost their first game of the season against the Air Force Falcons. It was the third and final non-conference game. The most common sentiment was, “if you can’t beat Air Force, how can you beat a team like Washington?” These critics of the Buffaloes do have some valid points. Two overtime games and allowing over 500 yards to Colorado State in the Rocky Mountain Showdown are not necessarily things to boast about. With ASU defeating Michigan State last week, hopes for the Buffs for this upcoming weekend have only fallen more, especially with this being Colorado’s first true away game.

However, with that being said, I am going to be the optimist. The Buffaloes have shown that they are a resilient bunch and have the ability to make half-time adjustments an execute them. We saw this in the Nebraska Game and the Air Force game even though CU eventually lost the later. I predict that the loss last week and the college community writing them off will light a fire under Tucker and the Buffs and will inspire them to get back on track with a win.

The last time CU faced Arizona State, Laviska Shenault Jr. scored four touchdowns to win the contest, 28-21. On Saturday, the Buffaloes face the Sun Devils once again with hopes of repeating the past.

For the first time in CU’s history, the football team secured back-to-back overtime games but unfortunately fell to Air Force 30-23 last weekend. Although the Buffaloes’ headed into the game prepared for a superior offense, the Falcons appeared with a stellar defense throwing CU off their game. But Shenault Jr. continued to shine by finishing with a total of 124 yards which included a 42-yard touchdown reception.

During Arizona’s face-off with Michigan, running back Eno Benjamin managed a 1-yard touchdown with 50 seconds left in the game while Michigan State’s kicker, Matt Coghlin, appeared to have tied the game with a 42-yard kick within the remaining five seconds. However, ASU took the game after the kick was negated since Michigan State had too many players on the field.

This weekend will be another close game between the Sun Devils and the Buffaloes. If Shenault continues to shine through the weekend, CU may have another win under their belts, given the fact he was a big part of CU’s win against ASU last year. Arizona started its season with a clean sweep and will be looking for a fourth win this weekend. However, we have also seen Colorado continue to improve since their sub-par debut during the Rocky Mountain Showdown and they will be fighting to make-up their loss against the Falcons. The real question is, will this game lead to yet another overtime?

For the first time in the Mel Tucker era, we will see how the Buffs responded to an extremely disappointing loss. There’s plenty to be concerned about as CU heads to the desert. Through three games, Colorado’s defense has allowed 472.7  yards per game and now they have to play without safety Aaron Maddox for the foreseeable future. This puts even more pressure on an explosive yet inconsistent offense to perform at a high level.

However, like my fellow staffers, I’m staying optimistic. Despite being 3-0, ASU has only averaged a mere 19.7 points per game this season, which ranks 112th in the NCAA. While I’ll likely regret it, I think if the Buffaloes offense can live up to their potential, they can beat the Sun Devils. As Arizona State’s head coach Herm Edwards once famously said, “you play to win the game,” and the Buffs have a good chance of doing so on Saturday.

I hate to say it, but week four is a tough one for the Buffaloes. Arizona State is as confident as ever following their 10-7 win over Michigan State and the Buffs are the only thing in their way of a 4-0 start. For Colorado, their heads are hung a little lower this week following a 30-23 loss against Air Force. But facing a Pac-12 south opponent does make it a little easier to get out of bed in the morning. The Buffs must have the energy for what hopes to be a game of 60 minutes and no more.

What also intrigues me is this will be a lower-scoring game. CU hasn’t faced an elite level defense yet and the Sun Devils have proven themselves on the defensive side of the ball. They’ve allowed exactly 7 points in all 3 of their games, an impressive start for a team with lower expectations. Colorado has also played past their expectations on defense. Besides their accumulative yards allowed, the Buffs’ ballhawks are a turnover machine and get key stops late in games. At the end of the day, it’s all about points but I expect CU’s defense to show up on Saturday.