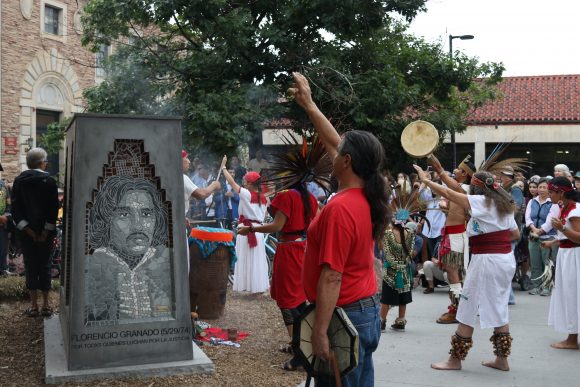 Over 200 people, some who knew members of Los Seis, gather outside Temporary Building No. 1 to remember six Chicanx students killed in 1974. (Zack Cohen/CU Independent)

After decades of silence following the death of six Chicanx University of Colorado Boulder student activists, the Boulder community came together Friday to commemorate the construction of a memorial honoring their lives. Los Seis is having their story told.

Over 200 people attended, some dressed in ceremonial attire and wearing crowns of eagle feathers. The memorial, constructed by CU arts student Jasmine Baetz and other community members, features murals of the six activists killed and stands several feet tall outside Temporary Building No. 1, which Chicanx students occupied in 1974 as part of a protest. During the building’s occupation, CU law graduate Reyes Martinez, CU Boulder junior Neva Romero and CU graduate Una Jaakola were killed in a bombed car at Chautauqua Park. Two days later, a second explosion on 28th street took the lives of former CU students Florencio Granado and Heriberto Teran, along with pre-med student Francisco Dougherty.

Guests at the event on Friday afternoon included those who knew members of Los Seis directly, as well as members of Grupo Azteca Tlahuizcalli. Prayers reflecting the highest honor within Native American communities were carried out by Denver singer Francis Sherwood of the Arakira and Hidatsa tribes. She said that knowledge of history only helps a community.

“Honor songs were for our warriors,” Sherwood said. “As I see today, our battlefields are changing. Education is our new battlefield for survival. Education brings that protection back to people, it brings it back to everybody.”

Thunder echoed in the horizon and a light rain began to fall while smoke from burning incense was blown throughout the crowd. Prayers were followed by traditional ceremonies carried out by members of Grupo Azteca. Senior Javier Padilla spoke of the crowd’s “diverse backgrounds, races and ages” and how seeing the Boulder community surround a piece of artwork reflecting a history that had been “silenced for so long” was “beautiful.”

“I’m in disbelief that is has taken this long after the incident, this long into my career at CU, for these issues to be brought to light,” Padilla said.

“Education is our new battlefield for survival. Education brings that protection back to people, it brings it back to everybody.”

Speakers continued to draw attention to what they see as a lack of diversity at CU. CU alumnus Esther Acosta reflected on her time at CU as a student activist and a member of Movimiento Estudiantil Chicanx de Aztlán in the 1960s. She highlighted the importance of identifying as Chicanx in a day and age where those of minority groups receive constant discrimination.

“We chose to call ourselves Chicano,” Acosta said. “We were called other things, but we chose our name. Chicano.”

When asked about the aftermath of the attacks in May of 1974, Acosta said it “brought people together instead of apart”  but the fear of death loomed over many members of the community.

“When you’re a student, you are not supposed to fear death,” Acosta said.

The installation’s future remains uncertain, however, as CU has not said whether the art will remain a permanent part of the campus. Baez, the installation’s creator, strongly supports the artwork staying in its location, saying that if it is removed it will lose its “charge and relevance.” Lisa Schwartz, community program outreach advisor for the Office of Outreach and Engagement, hopes the sculpture remains, saying it “addresses critical issues of racial equity.”