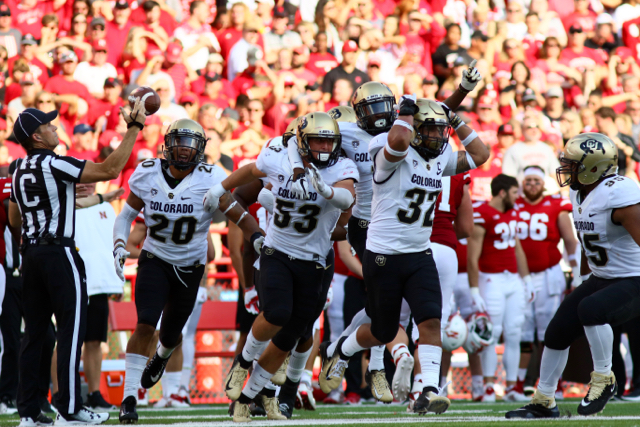 “I’d rather be dead than red.”

Former Colorado Buffaloes head football coach Bill McCartney’s famous words still ring true in Boulder. The bad blood between Colorado and Nebraska will peak yet again this Saturday with Nebraska looking for revenge and CU ready to defend its home turf.  Here’s what our sportswriters have to say about the upcoming game:

The Buffs play host to No. 25 Nebraska on Saturday afternoon in Boulder. This game, between two programs surrounded by a lot of preseason hype, has the potential to be very intriguing.

It’s year two of the rebuild for head coach Scott Frost and the Cornhuskers. Sophomore quarterback Adrian Martinez has some fans believing Nebraska could win the Big Ten West and that he could win the Heisman trophy. However, it was the Cornhuskers’ defense and rushing attack that took center stage in a somewhat underwhelming 35-21 victory over South Alabama at home last week. Nebraska will need to bring the same defensive intensity into Boulder if they hope to stand a chance against the Buffs’ aerial attack and newfound lead rusher, sophomore running back Alex Fontenot. With that being said, Martinez torched the Buffs’ defense in Lincoln last year. Given Colorado’s lack of depth, especially on the D-line and in the secondary, Martinez will likely be a problem again for defensive coordinator Tyson Summers and CU. In other words, the Buffs’ home opener against their rival will probably be an offensive show.

The turnovers Colorado generated in the Rocky Mountain Showdown masked what was a lackluster performance for the Buffs’ new-look defense under head coach Mel Tucker. CU’s lack of experience in the secondary was exposed by Colorado State early last week through the Rams’ vertical passing game. CSU mixed the run and the pass well, and kept Colorado on its heels defensively for a majority of the contest. Last season in Lincoln, Martinez gashed the Buffs on the ground and through the air. I expect the same thing to happen for a majority of the game, which means the pressure will be put on Colorado to sustain balanced drives against the Cornhuskers. Nebraska’s lack of experience defensively should allow the Buffs to use their passing attack to free up lanes for Fontenot and freshman running back Jaren Mangham.

Expect a tightly contested, high scoring matchup separated by one possession. Colorado pulls it out at home.

Both programs are entering this game with a lot of anxiety. Not just because they’re both coming off shaky wins, but because it’s a rivalry game that will feature a good deal of bad blood coming from fans and players on either side. 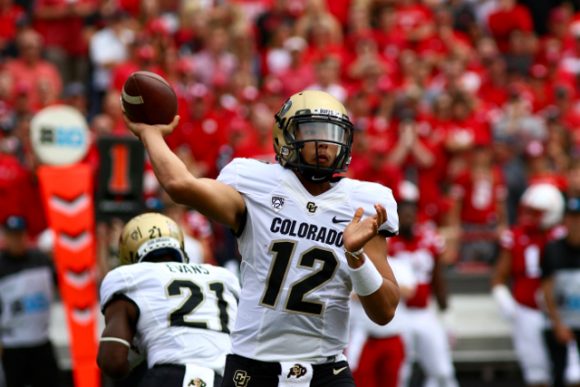 Similar to last week’s game versus CSU, the Buffs are likely going to need a strong offensive performance to stay in the game. I’m confident that CU will be able to pass the ball on the Cornhuskers, but if they can run the ball with the same efficiency as they did against Colorado State, they’ll have a much easier time managing the game. Alex Fontenot likely won’t average 6.6 yards per carry again, but if CU gets a similar performance from him and the offensive line that’s blocking for him, they should be able to move the chains more consistently, thus keeping their defense off the field.

Now, all that said, I have a hard time seeing the Cornhuskers losing this game. They’re arguably a more talented team and I’m assuming they’re hungry for revenge after losing to the Buffs in Nebraska last season.

Heading into week two of the college football season, the Buffs play host to their out-of-state rival in the form of the No. 25 Nebraska Cornhuskers. The matinee game pins two teams coming off relatively easy week one wins.

The Buffs come off a dominant win against CSU, but their defense gave up 505 total yards of offense to the Rams. Their run game shined, with sophomore running back Alex Fontenot rushing for 125 YDS and 3 TDS off of 19 carries. If the Buffs run game can repeat what they produced last week on the ground, and the air game can complement it with the use of junior wide receiver Laviska Shenault Jr., the Buffs only worry should be their freshman-filled defense. The Cornhuskers, on the other hand, come off a somewhat lackluster win last week against the University of South Alabama. Riding off the back of two defensive scores, the Cornhuskers look to their defense to play a key role in containing the Buffs.

The Nebraska offense, in contrast to their defense, seemed to underperform last week. Playing a team that gave up an average of 38.8 points per game, Nebraska scored 35 but relied heavily on their running back to contribute their offensive scores. Quarterback Adrian Martinez threw for a respectable 178 yards but had an interception in the process.

Both teams look to their defenses to step up and limit the damage that the other team’s offense can inflict. The Buffs will need their freshman-filled secondary to rise to the occasion. The Cornhuskers look to replicate their defensive performance from last week to help a sluggish offense come out on top.

With the facts out of the way, I see the Buffs pulling out a high-scoring affair. Although the Cornhuskers seek revenge from last year’s defeat, the Buffs rally behind the home crowd and improve to 2-0 on the season.

Despite Colorado’s close victory over the Cornhuskers last year, this season may be harder for the Buffaloes to secure another win. As Nebraska’s head coach Scott Frost steps into a year of redemption, CU will step into the rival game on Saturday determined to seize a second year of success.

Although we celebrated yet another victory against Colorado State, the Buffaloes found it difficult to keep up with CSU’s defense until the second half of the game. It’s surprising that Colorado managed a fifth straight victory over the Rams this year. After taking a 32 point lead over CSU in 2018, the 52-31 score this year reflected that the teams were better matched. CSU started this year’s game strong, but a fumble recovery during the start of the third quarter finally widened the gap allowing CU to finish with a win. Looking back at the game, however, the Buffs gave up a total of 505 yards to CSU. If they continue this against Nebraska there will be no chance of another victory.

Last week, Nebraska snatched a win against South Alabama in a game that was difficult offensively. Nebraska managed two defensive touchdowns which saved them in the game with what ESPN called a “sluggish” offense.

With CU’s defense and Nebraska’s offense, we can hope they both cancel each other out. It will be another intense and close game between the Buffaloes and Cornhuskers. Nebraska head coach Scott Frost was not happy with the Cornhusker’s 35-21 victory over South Alabama and will be pushing the team to their limits to secure a win on Saturday. It will not only be the team who wants it more but the team that learns from their mistakes that will grasp the victory. If Colorado’s defense steps it up they could have a chance on yet another win against Nebraska.

In just his second game at the helm, CU head coach Mel Tucker will have a career-defining opportunity. The Colorado-Nebraska rivalry has been resurrected and both teams are hungry. I honestly can’t remember a regular-season game at Folsom Field with more anticipation than Saturday. Colorado Athletic Director Rick George has already announced the game will be the “highest revenue game we’ve had in our history.” How can you not get excited after hearing that? Yes, the game is about more than just money, but it’s not often that you’re selling thousand-dollar tickets for a week two matchup. 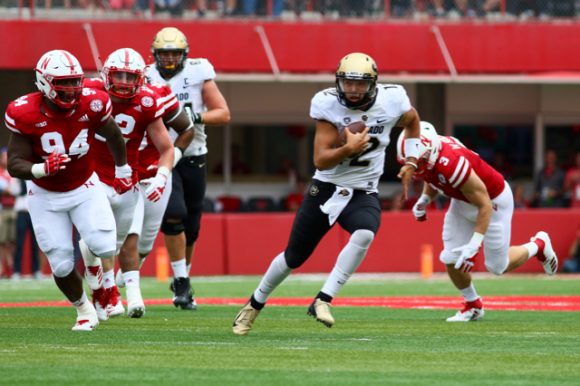 What makes me even more excited is the game will be competitive. We’ve heard mixed reactions after Nebraska’s 35-21 victory over South Alabama last week, but the same can be said about CU’s 52-31 victory over Colorado State. What can’t be argued is these two squads want to play their best football come Saturday. The Buffs’ won a close game against Nebraska a year ago and you can expect another nail-biter game this year.

Equally exciting is the Buffs’ run game could be sneaky good. Sophomore tailback Alex Fontenot and freshman tailback Jaren Mangham had breakout performances last week, but the lights will shine a little brighter against Nebraska. The Huskers allowed an uncharacteristic 195.8 rushing yards per game last year and the Buffs’ young running backs must continue their growth on a big stage.

CU has done their best to keep the red out of Boulder, but the red flag of the Buffs’ defense will be a problem. After allowing 505 yards to CSU last week, something has to change to give their offense a chance to stay in the game. Nebraska has a talented quarterback in sophomore Adrian Martinez who threw for just 178 yards and 1 interception to start the season. Their leading rusher, junior Dedrick Mills, ran for just 44 yards as well during week one. You can’t take too much away from one game, but those are encouraging numbers if you’re a CU fan.

Behind a raucous Folsom crowd, I’ll be optimistic and give Colorado the edge in a game for the ages.

Most CU students today think of the Rocky Mountain Showdown as the big rivalry game of the season, and it has been for the past decade, but now, change is here. With the final showdown in Denver taking place last Friday, it’s the perfect time for Colorado fans to rekindle the fire against an old rival, Nebraska.

Colorado managed to beat the Cornhuskers last year, 33-28, winning the first matchup between these teams since 2010. Nebraska is known for their proud fan base and none were too pleased after being defeated at home last year. This time around, everyone in the state is expecting the Huskers to bring home the win.

Neither team in their first games last week blew anyone away; if anything, both teams had slightly lackluster appearances, except for select few players. This week both teams will need everyone on their roster to show up and have a great performance. Mistakes will cost severely in this game as both teams have high-powered offenses and turnovers could easily result in scores, so defense could be the X factor in this game. I agree with my fellow writers that the scoring will be frequent, which means that just one turnover could be the difference maker. 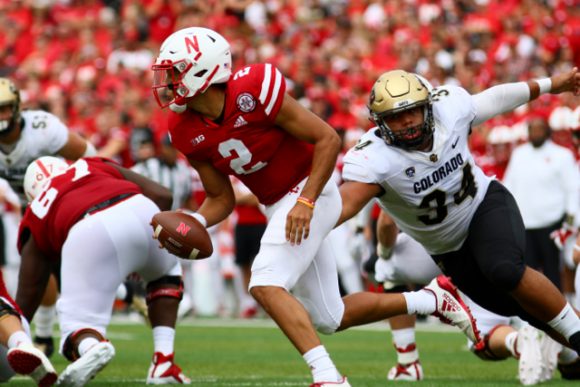 To continue, something that should be noted is this is only week two for these teams. Both squads are still figuring out the best roles for their new players and their in-game strategies. These teams could possibly look much worse or better than week one. For example, a player like Laviska Shenault Jr.; he was stifled last week by the CSU defense and only allowed 48 yards receiving and one TD. Shenault Jr. is itching to get touches and who knows, maybe he could be the difference maker on Saturday.

With all that being said, I think Nebraska wants this game more and they are going to take it.