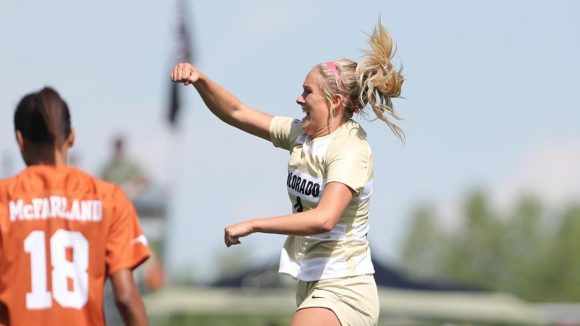 Both teams showcased excellent defense to start the match with the two only attempting one shot each during the first 17 minutes. Colorado’s attempt came from senior midfielder Taylor Kornieck, whose shot flew over the net.

As the first half progressed, shots continued to remain rare. The Buffs best opportunity came at the 42:36 mark when sophomore forward Libby Geraghty got a clean look on goal during a fast break, but couldn’t capitalize due to an impressive save by Texas’ junior goalie Savannah Madden. As a result, CU had to settle for 0-0 tie at halftime.

Intent on making up for the missed opportunity, Colorado came out of the locker room aggressive on offense. Freshman forward Tessa Barton took advantage of a good pass from senior forward Camilla Shymka and scored the first point of the game.

“We knew that we had to stay calm and stay positive,” Barton said. “As long as we go together, we’ll win together. We just told each other to stay calm, play positive, play simple and we’ll get a goal.”

The goal marked the first of Barton’s collegiate career. Barton’s older sister and senior forward Tatum Barton was thrilled for her.

“It’s exciting,” Tatum Barton said. “I’m really happy for her. It’s hard to score in college so I’m really proud of her.”

And the Buffs offense only continued. After only attempting four shots in the first half, CU amped-up the pressure offensively with 12 during the second. One of the biggest shots happened with 62:02 minutes on the clock when Tatum Barton delivered a terrific pass to fellow senior forward Stephanie Zuniga, who drilled the ball into the right corner of the net to give Colorado a 2-0 advantage.

“I just heard everyone screaming ‘Stephanie,’” Barton said when asked about her assist. “I just looked up and floated the ball to her.”

But Texas didn’t go down quietly and responded with a goal of their own. Sophomore midfielder Julia Grosso dribbled through two Colorado defenders and snuck the ball into the bottom right of the goal, cutting the Longhorns deficit to 2-1 with 18:29 minutes remaining in the game.

The Buffs managed to get off five more shots in the final 18 minutes but couldn’t find the net on any of them, allowing Texas to stay in the game. In storybook fashion, the Longhorns were fouled with one second left in the match. This gave Texas junior midfielder/forward Haley Berg a penalty kick and a chance to tie the game within regulation. Fortunately for the Buffs, the kick was just a bit high and the shot bounced off the crossbar.

Following the game’s dramatic finish, head coach Danny Sanchez spoke glowingly about his team’s performance but admits that they could have done a better job finishing the match.

“The last five or six minutes we didn’t manage it well, we got a little impatient,” Sanchez said. “But like I told the team, in this situation against good teams, you can do it in practice, but you have to learn it here. So, we’ll have some good film to show the players.”

With the win, Colorado moves to 4-0 on the season with two more games remaining in their homestand before beginning their first road trip of the year.

The Buffs next match is on Thursday, Sep. 5 against Austin Peay State at 4:30 p.m. MST in Boulder.

Colorado struggles with a 6-0 defeat at the hands...