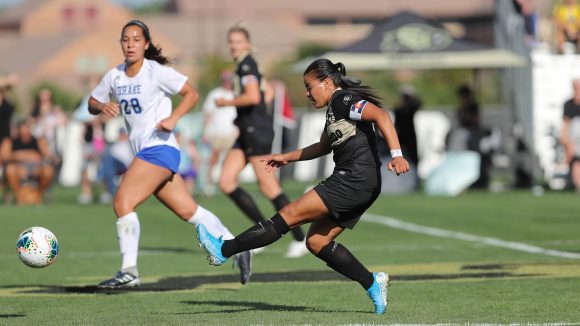 Stephanie Zuniga makes a pass during CU’s 2-0 victory over Drake on Thursday (Photo courtesy of cubuffs.com)

The University of Colorado women’s soccer team kicked off their 2019 season against the Drake Bulldogs Thursday evening with a 2-0 win.

The match marked head coach Danny Sanchez’s 500th career game as well as senior goalkeeper Jalen (J.J.) Tompkins 38th win, which placed her first all-time for CU goalkeepers. With Tompkins starting for the Buffaloes it was no wonder the game was scoreless throughout the first half. CU also outshot Drake 14-2.

“It’s incredible, I mean I can’t really find much wrong with it honestly,” Tompkins said, praising the Buffs’ strong defense. “I was so happy from start to finish, it was great.”

For Tompkins, it was her 18th career shutout, 4th all-time at CU, and the senior goalkeeper certainly started off her season on the right foot.

On the offensive side of the ball, senior midfielder Taylor Kornieck and senior forward Tatum Barton started the game off aggressive with three shots apiece. Unfortunately, only two of those were on goal and both were saved by Drake’s junior goalkeeper Kelsie Stone.

It wasn’t until minute 50 of the second half that Colorado finally broke through. Assisted by senior forward Camilla Shymka, Kornieck headed the ball in to score her first goal of the season. Two minutes later CU scored their second goal thanks to senior forward Stephanie Zuniga while Kornieck stayed on the assisting side of the onslaught.

Getting off to a fast start is sometimes difficult during a season opener. Nerves are abundant and players are working to get back in the game mindset. Sanchez admits that, in the past, the Buffs have gotten off to slow starts, but the energy was different for Thursday’s game.

“It was key for Taylor to get that goal early in the second half and obviously to slip one in to Stephanie to get the second goal,” Sanchez said. “(The score) took the pressure off and allowed us to, with the exception of the goalkeepers, play all of our healthy players.”

Sanchez was also pleased with the effort from senior forward Zuniga’s in securing the night’s second goal.

“She’s a fifth-year senior and she’s been through it and like we talked a lot about, it’s now or never,” Sanchez said. “We know she’s a very good player, she obviously had a good game.”

The Buffs are filled with senior talent and have been meshing well together with the younger players. The team knows it is a dynamic that will serve them well come future games.

“Everybody cares about each other,” Tompkins said. “We got some great leaders on the team, we’ve got four captains, but besides that, we have underclassmen leaders. Other seniors have stepped up tremendously, so it’s been great. I love coming to practice every day, either way I love it, but the team’s an extra bonus.”

CU will look to keep the momentum going as they prepare to take on Boston University this Sunday at 12 p.m. MST. You can watch the Buffs at Prentup Field on East Campus.