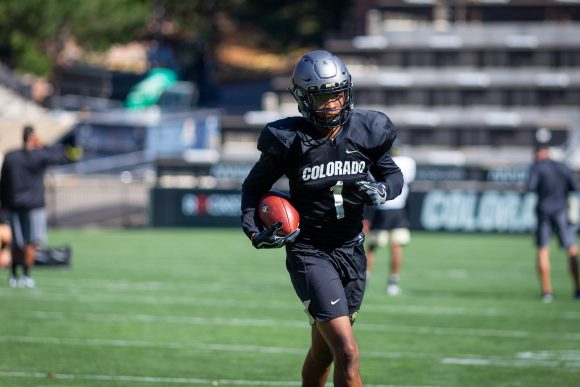 The 2019 University of Colorado football team only just began practicing at the beginning of August, but expectations are already high for new Head Coach Mel Tucker and his team. With veterans like senior Steven Montez and junior Nate Landman returning, positions like quarterback and inside linebacker are already set. However, positions such as running back are mostly up for grabs due to a very young squad of mostly freshmen.

Coaching this young running back core is Darian Hagan, who will be entering his 15th season with the Colorado Buffaloes. Hagan previously held the position of running back coach 10 years ago and is now in his second stint at CU. Hagan formerly played as a quarterback for the Buffs from 1988 to 1991. In 1991, he helped lead the team to the national championship. Now back as a coach, Hagan will have plenty of work to do, but talent shouldn’t be an issue, even among such young players.

“We got at least three running backs who can get it done,” Tucker said. “I actually saw Jarek Broussard step up today early in the scrimmage; in terms of having depth at that position I think we are sound and solid.”

Broussard, a redshirt freshman, is just one of four freshman running backs on the Buffs’ roster. Jaren Mangham, another freshman running back, is hoping to see a heavy workload early in the season after having a stellar spring season game a few months ago during which he rushed 12 times for 149 yards and three touchdowns, including a 65-yard touchdown run.

With early achievements, sometimes ego can build, but Mangham is maintaining a team-first attitude and making sure success does not go to his head.

“I just want to get out there and get better in any way I can so I can help the team,” Mangham said. “I expect to have a good freshman year but I just want to focus on winning, doing everything in my power to help our team win, that is really my motivation.”

With so many running backs vying for carries, there is certainly competition among teammates. While some may believe this threatens team improvement, others say it drives players to work even harder. Juggling a competitive edge while maintaining solid sportsmanship is a line many players balance. The Buffs’ lone sophomore running back, Alex Fontenot, believes competition only makes him better.

“My personal goal this season is to get 1000 yards,” Fontenot said.“The competition really helps all of us, it keeps driving us to do better than one another but we still have that team comradery.”

The running back core is a confident bunch for their age, not shy about what they expect from themselves and their teammates throughout the season. Coach Tucker has taught these players to think big and aim high and that is just what they are doing. When asked about how the running back core is going to fare as a whole this season, Mangham said people should not underestimate them just because of their age.

“Even though we are young, we are very talented and we put that on showcase every time we go out there and make plays,” Mangham said.

As game day approaches it will be interesting to watch as Tucker begins to lean towards his favorite backs, but for now, the position of RB 1 is still up for grabs. Tucker seems to be satisfied with the running backs and the rest of the team, at least for the moment.

“Overall I thought we were pretty sharp in our first scrimmage,” Tucker said. “I look forward to seeing the tape because I really like what I’m seeing with guys stepping up, developing and getting better.”

The Buffaloes will continue to practice throughout August with their first game, The Rocky Mountain Showdown, on August 30th at 8:10 p.m. MST against Colorado State. The game will be held at Mile High Stadium in Denver.