Colorado shows off its offensive depth during Spring Game 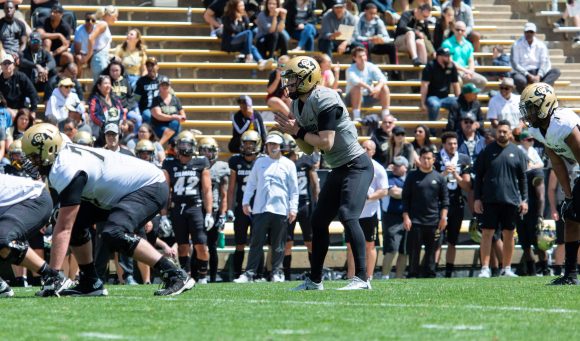 Junior quarterback Sam Noyer gets ready for the next play during the Spring Game. April 27, 2019 (Casey Paul/CU Independent)

The Colorado Buffaloes felt pretty good at the quarterback position. While senior QB Steven Montez is a lock for the starting role, the annual Spring Game was an opportunity for coaches and fans alike to see a glimpse of the team’s bright future.

Behind Montez are two solid options for Colorado: sophomore Tyler Lytle and junior Sam Noyer. Their regular season experience is without a doubt limited, so a few snaps in front of the Folsom faithful proved valuable.

“I’ve had a few situations like this before where you now get thrown in the mix,” Noyer said. “I just got to learn from my ups and downs, ebbs and flows, and really just come back and watch film and get better.”

Noyer saw action in four games last season, racking up a total of 60 passing yards. He blew that mark out of the water on Saturday. The junior quarterback connected with sophomore wide receiver Daniel Arias for a pair of touchdowns as Noyer ended the day with 195 total passing yards.

“This is my third spring ball now,” Noyer said. “It just feels good to be out in front of the fans for once and get some playing time.”

As for Lytle, he didn’t get as many snaps but was also impressive during his spring game. He’ll head into the summer passing for 119 yards and a touchdown. Lytle was also pleased with the outcome of spring camp.

“I think this spring was really productive,” Lytle said. “From an entire offensive standpoint, and as a team standpoint, I think we did really well. So I’m excited to go into the offseason and keep working.”

The pair of quarterbacks are very similar from an experience standpoint, though Lytle is one year younger. Lytle’s career numbers tantamount to four games as well, where he threw for 55 passing yards. It’s a little too early to speculate, but the quarterback battle could be a competitive one come this time next year as both Lytle and Noyer battle for the starting role following Montez’s graduation.

The Buff’s offense needs more than just a competent quarterback to be successful, however. The aforementioned Arias will be a threat in 2019 and beyond. Head coach Mel Tucker was pleased with the 6-foot-4 wide receiver.

“He’s a kid that comes out here and works hard,” Tucker said. “You can see that he has talent. He’s very competitive. He’s a quiet kid but he works his butt off and his teammates respect him. I was happy to see him have some success today.”

Arias ended the day with 138 receiving yards and a pair of touchdowns. Not a bad day for a guy with just one career reception, which also happened to be a touchdown catch against his hometown Washington Huskies last season. Junior wide receivers Laviska Shenault Jr. and K.D. Nixon will still be the playmakers for this Colorado team, but Arias took advantage of some spring snaps.

Moving right along, the offensive line allows these playmakers to do what they do. Sophomore offensive lineman William Sherman made the most of the inflated scrimmage.

“I felt great,” Sherman said. “I was out a little bit this week with [an] injury but it was good to be back out here and, you know, ball for the last practice with my teammates.”

Sherman was also happy with the team’s mindset coming into the day.

“[Coach Tucker] wanted us to come out here and take this seriously like a game,” Sherman said. “So that’s what we did and we were pretty successful with that.”

On the ground, freshman tailback Jaren Manghan had a spring game to remember. The four-star recruit rushed for 149 yards and found the end zone three times, a good sign for what hopes to be a balanced offense.

“Guys running hard, guys competing,” Tucker said regarding his freshman running backs. “We got some good, young, talented players and I’m happy we got them.”

Coach Tucker is always assessing the development of his team. He won’t remember the final score of the spring game, but the performance of his young offense will not be forgotten.

“It’s more of a collective evaluation,” Tucker said. “Obviously we’re in our stadium. It’s a different environment, but we’re looking for more execution. We’re looking for guys that can play with technique and fundamentals and execute under pressure. This was a good opportunity to do that.”