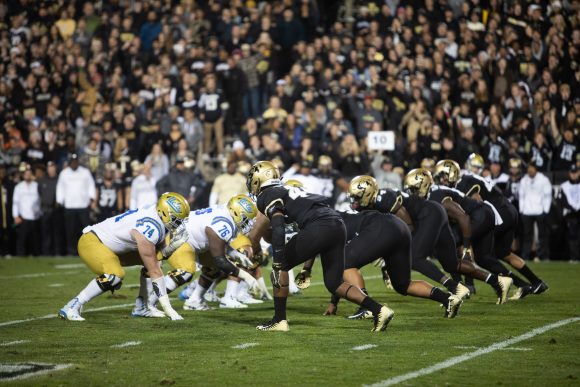 With the graduation of senior Rick Gamboa, who currently is forging a path to the NFL, the Colorado Buffaloes, under first-year head coach Mel Tucker, must fill a gap at the inside linebacker position.

The question mark surrounding who will ultimately get the call to play alongside junior and second-year starter Nate Landman is a familiar situation for many position groups of Tucker’s Buffs this spring.

As he put it best a few weeks ago: “We have a rep chart, not necessarily a depth chart.”

“[Coaches] tell us everyday that no position is set in stone, so be ready to come out to work,” said junior inside linebacker Akil Jones. “Anything could happen — one person could go down [and] one person could be working harder than the next. Every other day they’re telling us who’s starting and who’s second starting, who needs to pick it up and who needs to keep working.”

With that said, as of now, the top two candidates to join Landman at the inside backer slot by all indications appear to be Jones and sophomore Jon Van Diest.

Van Diest has a chip on his shoulder; coming out of Cherry Creek High School, he was a highly-regarded recruit. Scout.com ranked him as the No. 1 outside linebacker in the state of Colorado while his 60 career starts on the varsity team established a new Cherry Creek record that had stood unbroken since 1955.

Unfortunately for Van Diest, during his redshirt freshman season in 2017, he suffered an ACL tear in his left knee, sidelining him for the year. He began to bounce back in 2018, seeing action on 23 plays over two games, but now, in the spring of 2019, he feels ready and reinvigorated.

“This is the healthiest I’ve been in a long time, which is really good and encouraging,” he said. “Football is about maintenance — everybody’s is going to have nicks and dings, but I’ve got enough going for me where I can go all out.”

During Friday’s scrimmage, Van Diest was tied for fourth among CU defenders with four tackles. For Van Diest, his focus is on each new practice.

“I want to reach my goals and my dreams and be the best player I can be, so a big part of it really is just waking up in the morning with the right mindset,” he said. “Anyone that plays football knows that there’s times when it’s not that fun…we’ve got to push through the ground. That’s part of the game and why a lot of us love it, so it’s just [about] having a fighting spirit and improving.”

“I think special teams is a big [part of] transitioning to linebacker,” he said. “A lot of the positions out there for special teams relate to a lot of drills we do as linebackers. [Inside linebackers coach] Ross Els always tells us that you’ve got to be able to play special teams in order to play the linebacker position. It’s motivation — everyone wants to get on the field and there’s ways you do it, and that’s through special teams.”

Jones and Van Diest do have a unique opportunity in working with Els — he was one of three coaches, the other two being Darrin Chiaverini and Darian Hagan, that Tucker retained from Mike MacIntyre’s staff.

“Ross Els is a great coach — probably one of the better coaches I’ve had the pleasure of working really closely with,” Van Diest said. “He knows us, knows how to coach us and it’s cool; our [linebackers] meeting room has a sense of family.”

Jones led the Buffaloes with seven total tackles during April 19th’s scrimmage at Folsom Field, while Landman recorded four. The latter, who led Colorado with 123 tackles in 2018, has set a good example for the rest of the linebacking crew to follow.

“I’d say hands down, Nate’s the most physical player on the team, no question about it,” Jones said. “That’s something I’m trying to work on: physicality, and knowing every check to make, knowing not only my position but the position next to me. We’re always firing on all cylinders.”

“Firing on all cylinders” is a good way to describe Tucker’s expectations of his team this spring. The Buffaloes under him continue to put an emphasis on physicality and toughness.

“It all starts with being in the best condition that we can be in,” Tucker said Friday. “The next thing is that we have to be physical on both sides of the ball and at every position…In terms of out linebackers, I saw guys step up and hold and strike guys [during the scrimmage]. We need to do a better job of making sure ball carriers don’t fall forward. We want to strike them, knock them back and gang tackle and swarm.”

For any new head coach, much of the initial progress and improvement has to do with guys on the roster buying into what their coach is selling. The Colorado Buffaloes seem to have a pretty clear understanding of what Tucker’s goals are.

“The guys understand and describe my style of coaching [as placing an emphasis on physicality] because that’s the way it needs to be,” Tucker said. “That’s the way the game needs to be played and in order to have the type of program that we’re going to have, physical, hard-nose football has got to be the foundation.”

Colorado will wrap up its spring practices next week, culminating in the annual Spring Game at Folsom Field on Saturday, April 27. The game is open to the public and begins at 12 p.m. MST.