Curtis Chiaverini, under his dad’s guidance, is ready for the call 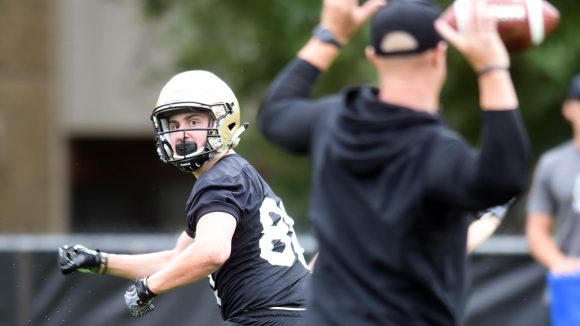 Colorado Buffaloes walk-on sophomore wide receiver Curtis Chiaverini is the son of current Buffs assistant coach/wide receivers coach Darrin Chiaverini. While Curtis walked on at CU in the beginning of the 2017 season, the elder Chiaverini has been coaching the Buffs since the 2016 season.

Darrin coached Curtis in youth football but wasn’t around a lot during Curtis’ high school years because of his coaching responsibilities elsewhere. When asked about what it is like to have his father around all the time now at Colorado, Curtis described it as “a great thing.”

“It’s cool because when he wasn’t coaching me, I didn’t really see him too much in off time, but now I see him all the time,” Curtis said. “When he is getting on me, he knows what’s in my best interest, so I really listen to him.”

Coach Chiaverini added that being able to coach Curtis at CU is a unique opportunity.

Curtis talked about how in spite of the fact that he is the coach’s son, coach Chiaverini doesn’t put any extra pressure on him. Curtis said that the pressure that he does feel comes from his own internal drive.

“[My dad] tries not to put any pressure on me,” Curtis added. “Any pressure I feel, I put on myself because I’m always striving to get better.”

Despite the fact that coach Chiaverini has an intense demeanor on the field, Curtis said he and his dad are really close off the field and that his dad is just a normal father off the gridiron.

“Me and my dad are really cool,” he said. “We are always hanging out on the weekends, watching movies and stuff. He’s one of my close friends.”

When asked to come up with one word describe his father, Curtis went with “dedicated.” He said his dad applies a dedicated mindset in all aspects of his life, whether it’s family or football related.

“In every aspect of his life, he is just a dedicated man, whether it’s family, football [or] work, just everything,” Curtis said.

When asked about the difference between coach Chiaverini as a father compared to Chiavernini as a coach, Curtis said one’s more laid back than the other.

“One has a much more relaxed demeanor. Darrin the coach really just gets on to you and Darrin the dad just likes to chill out and just talk smack,” Curtis laughed. “So, it’s a big difference.”

Coach Chiaverini said that football wasn’t always a sure thing for his son. However, over time Curtis has grown to love it.

“I’m really proud of him. He’s come a long way from when he was a younger kid because he didn’t really enjoy football that much when he was little and he has really come to love it; and [he] wants to get better and work hard,” he said.

Coach Chiaverini’s wide receiving unit will be led by upperclassmen, such as juniors Laviska Shenault Jr. and K.D. Nixon, as well as the lone senior at the position, Tony Brown. The primary points of emphasis for the Buffs’ wide receivers have been to maintain a high level of confidence in the system and what the receivers do as a unit.

“The points of emphasis for us have been really just staying calm, being confident in what we are doing, and see ball, catch ball; and then we just take it from there,” Curtis said.

Individual improvement in the spring session will be critical in order for the Buffs’ wide receiving unit to find success. Curtis said he feels he has improved significantly since last fall.

“In my aspect of my game, my separation and just route technique has gotten a lot better,” he said. “I still got a lot to improve on, but I feel like I have made strides since the fall.”

Last year, multiple CU wideouts suffered nagging injuries that forced them to miss time late in the year. Shenault Jr., former Colorado wide receivers Juwann Winfree, Jay MacIntyre and Nixon all missed time, which likely contributed to the Buffs’ struggling offense late last season. Because of this, Curtis said everybody has to be ready.

“That’s how [coach Tucker] is with everybody. He just wants everybody to be prepared at any given moment and then when the opportunity arises you got to take advantage of it,” Curtis said.

Being able to learn from Shenault Jr., Brown and Nixon has been critical to the success of the younger players at the position.

Coach Chiaverini has seen Shenault grow throughout his time at Colorado. Chiaverini recruited Shenault and has seen him mature as a person and leader.

“I recruited Laviska out of high school and I’ve really seen him grow as a person. He’s a lot more outgoing,”  Chiaverini said. “He’s a lot more engaging with people. He looks people in the eye now, and I think it’s just a matter of him being more comfortable with himself teammates. I like the way he works.”

Coach Chiaverini said his son just continues to embrace every moment and is getting better every day. Welcoming and overcoming obstacles is part of football and Chiaverini is happy that Curtis continues to progress.

“It’s good to see that as a dad, to see his development as a young man, being able to attack challenges and overcome adversity because that’s part of the game,” Chiaverini said. “It teaches you life skills through football. So I’m proud of him as a dad obviously.”

Chiaverini said the key for Curtis is making the most of his chances. He’s seen Curtis progress through practice and is confident he will make the most of his opportunity.

“[Curtis] had a nice catch today in team drills. We had live team drills and he came out and made a really nice catch. Whenever you get an opportunity to play you have to take advantage of it,” Chiaverini said.

Curtis, coach Chiaverini and the new-look, coach Tucker-led Buffs will take the field for the annual Spring Game on Saturday, April 27 at Folsom Field.