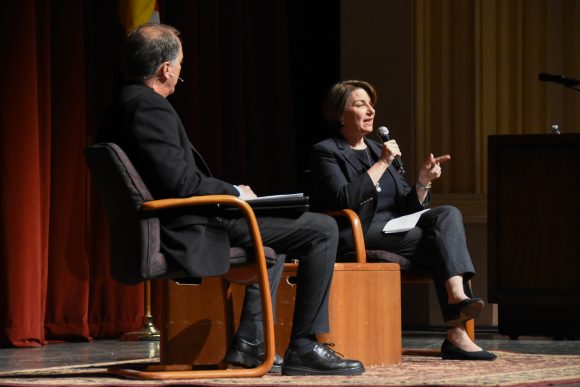 Amy Klobuchar discusses her plan for unification and change in regards to issues like climate change and gun reform. Apr. 13, 2019. (Fiona Matson/CU Independent)

“She’s the real deal,” said a woman after listening to a talk by Minnesota Sen. Amy Klobuchar alongside a crowded audience Saturday afternoon.

Klobuchar, 58, closed out the University of Colorado Boulder’s Conference on World Affairs with a speech about restoring faith and trust to the office of the United States presidency. The congresswoman is currently running as Democratic candidate for president, hoping to defeat President Donald Trump in the 2020 election. The CWA has hosted senators before, but Klobuchar is the first to be a woman.

A self proclaimed “proven progressive” and Minnesota’s first female senator, Klobuchar, made her case to audience members for why she should lead the Democratic party in 2020. Echoing a pragmatic and empathetic outlook, Klobuchar said she’s recently met with people whose houses were underwater in Iowa, visited a biofuel plant and spent time in Tampa Bay for a climate change meeting.

The senator wasted no time before calling out Trump, saying he “wakes up every day, tweets whatever he wants but doesn’t respect the amendment that allows him to do it … and proceeds in his day to divide people in literally almost every single thing he does.”

“And I don’t think that’s leadership,” Klobuchar said. “That’s not governing and America is much more big-hearted than that and better than that.”

Applause erupted as she went on to say that discussions must still be had that do not always cycle back to the president, warning that people cannot “go down every rabbit hole” that Trump wants them to. She instead turned her focus to speaking about the importance of youth in bringing about change.

“Students and younger people have the biggest stake in this election,” Klobuchar said. “More than anyone.”

It is young people who will incur the damaging effects of climate change, said Klobuchar; the ones who will bring sensible gun control policies and battle rising healthcare costs and harsh student debt policies.

She called for the youth to be as energized as they were during the 2018 midterm elections when they “took back the House of Representatives.”

It’s a message that CU freshman Kavya Kannan believes is more important than ever. Kannan was excited to hear a “first-hand perspective” from a 2020 candidate before making her decision for who she would support.

“Get as involved as you can politically and not being afraid to speak your opinions or your perspectives,” Kannan said. “I think [Klobuchar] really emphasized that.”

She said Klobuchar’s emphasis on preventing gun violence especially resonated with her.

“I do come from a community that was effected from gun violence,” Kannan said. “[Klobuchar’s] perspectives on that, I really like them.”

Klobuchar also discussed her vision as president, saying that the U.S. needs to amend foreign ties and show support to other nations.

“We don’t win when we stand alone,” Klobuchar said. 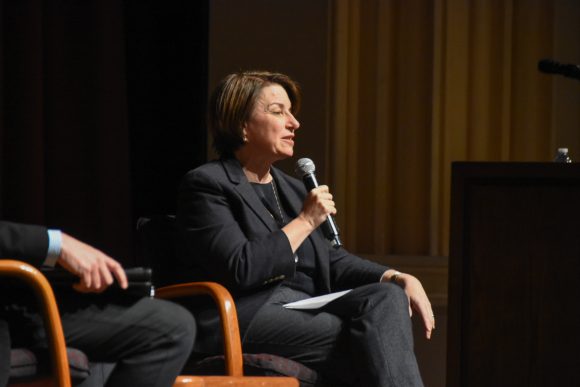 Senator Klobuchar, from Minnesota, had many opinions that resonated with Boulder audiences. Apr. 13, 2019. (Fiona Matson/CU Independent)

The 2020 candidate plans to re-enter the U.S. into the Paris Agreement, which motivates members of the United Nations to combat climate change. Klobuchar is also a cosponsor of the Green New Deal and will bring “sweeping legislation” when it comes to green building codes, infrastructure and renewable electricity standards. For Klobuchar, climate change is a conversation that needs to be had with “the entire country.” She recalled stories from people suffering from the current severe floods in the Midwest and a video of a father driving through flames in Paradise, CA, singing to his daughter to calm her down as the fire surround his vehicle.

Klobuchar added for people not to “buy” the “environment versus economics argument,” stating that homeowners’ insurance has gone up 50% in the last few years.

Economics and infrastructure policies were further discussed by Klobuchar, who wants to see rural broadband across America, free two-year community college for students and insurance-covered healthcare for patients with pre-existing conditions.

Klobuchar reiterated the importance of ending gun violence multiple times. She remembered the moment when she told a mother who lost her child in the Sandy Hook shooting that the Senate did not have enough votes to pass a bill for stricter background checks.

“We failed at that,” Klobuchar said. “With these Parkland students, if we get bested by a bunch of 18-year-olds and that’s how we finally pass background checks,” that would be wonderful.

She reminded audience members and especially young voters that while there may be more high profile candidates in the race, she has heart and strength.

“I’m a bit of an underdog in this campaign, I know that,” Klobuchar said. “I don’t come from money, I don’t come from a political machine, but I was someone that gave an entire announcement speech without missing a beat in the middle of a blizzard with no gloves.”

Following her talk, 13-year-old Frances Johnson says she was “impressed.”

Johnson does wish Klobuchar would have had more to say to those who are not of age yet to vote but still want to be involved.

“What are we suppose to do?” Johnson asked.

Her brother, 15-year-old Benton Johnson, said if young people can start understanding political topics now, it will become vital when it is time to vote.