Opinion: CU can do more to protect students against assault 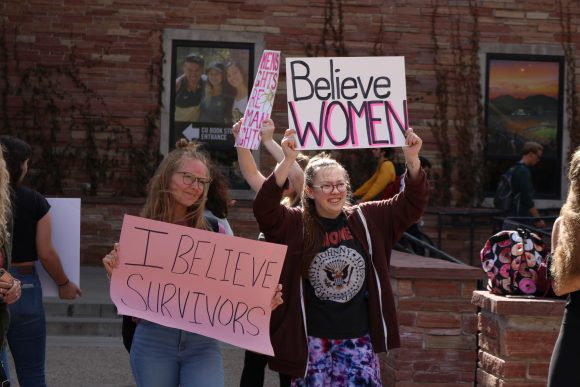 Protesters reference the recent hearings of Brett Kavanaugh, then-nominee to the U.S. Supreme Court, and ask for the community to listen to survivors of sexual violence. Oct. 25, 2018. (Lucy Haggard/CU Independent)

As a woman, I knew that attending college carried the risk of harassment, sexual assault or worse. I had just hoped that wherever I chose to go would put forth its best effort to minimize the chance that anything bad would happen.

Unfortunately, while walking on or off CU’s campus at night, even with a group of friends, I find myself glancing over my shoulder every 10 seconds to see if anyone is following me. I try to figure out what I have on me that I could use as a weapon and what I would do if I were attacked.

While almost every woman has the same thoughts when they go out at night, these are not things that I should have to consider while on the premises of my university. According to the CUPD, in this past school year alone, there have been at least ten instances of assault or crime reported on campus. Keep in mind that those incidents reported only include what the police department and the university has chosen to release publicly through their alert system. CU has faced several more serious scandals involving sexual assault, including the most recent charge against Zachary Roper, 19, for the alleged rape of a student after a sorority event in January.

I cannot help but feel as though none of us are protected enough by the university.

All of the college campuses I toured my senior year of high school had something that CU does not: a blue light system. If you recall your own college tours, you will probably remember seeing those bright blue poles that lined campus walkways. Attached to them is a telephone that directly connects you to the university’s police department in the event of an emergency. Many campuses also use the blue light system to offer free rides around campus at night for any student who feels uncomfortable walking home alone. This emergency phone system is an efficient way to keep students safe, something that CU desperately needs to work on.

Over three years ago, CUPD’s then-chief of police, Melissa Zak, made the decision to remove the blue light system on campus.  Due to the increased use of cell-phones for emergencies, Zak saw little need to keep and maintain over 80 blue light poles. Instead, the CUPD gave tips to students on alternative ways to contact authorities in an emergency, such as texting or calling 911 or downloading the LifeLine Enterprise app which involves an emergency button that will contact a local police department.

Though these tips are helpful to have, it should have been considered beforehand that we cannot rely on every single person to have a reliable, working cell phone at the time of an emergency on campus. It is classist and irrational to assume that every single student can afford or will have a cell phone on them, especially a smartphone that would allow for downloading the LifeLine Enterprise app.

While cellphones are the most prominent form of communication, not everyone may have a cell phone on them at the time of an emergency. Cell phones are also susceptible to low battery and service interruptions, while blue lights are not. The blue light system is reliable, efficient and it will always work.

In 2014, the CUPD’s annual security and fire safety report recorded a total of 10 cases of rape and zero cases of fondling that occurred on campus. Note that during this year, the blue light system was still in place. In the years after the system was removed, those numbers start to increase.

While there is no way to know whether or not the blue light system could have prevented these incidents from occurring, it certainly would have implemented an extra measure of safety that otherwise is not there at all. Even if the blue light system is not used as much as the CUPD would hope, its presence alone acts as a protective figure, discouraging any attacks from occurring near one.

It is a university’s responsibility to keep its students safe and to assure them that there are resources available at any given time if they are in need of help.

The university should not compromise student safety just because putting the responsibility on individual students and their cell phones is more convenient.

Do you know what is not convenient? Getting followed and harassed by someone from the Hill while on campus when your phone is dead and no one else is around to help you.

Taking the blue light system out shifts too much responsibility onto the students to keep themselves safe. It appears as though CU is no longer contributing to making the campus safe or allocating the proper resources to assure a greater presence of security. Instead, it is leaving it up to students to know what to do when they are in an emergency situation.

CU has shown me alert after alert, but it has not shown me that it is committed to building and maintaining a safe environment for its students.