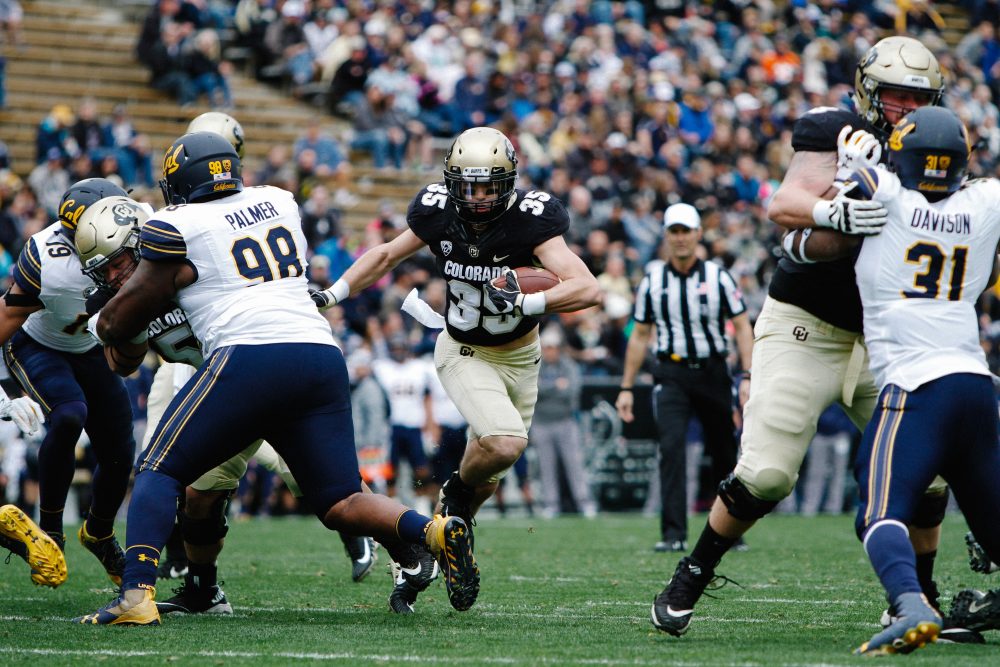 Of the many question marks that first-year head coach Mel Tucker must address as spring football practices get underway, the situation in the backfield for the Colorado Buffaloes seems like one that may take some time to answer.

For all intents and purposes, Colorado enters borderline uncharted territory at the tailback position heading into the 2019 season. The era of Philip Lindsay grows more distant with each passing day and now the Buffs must tread onward without the services of Travon McMillian, who racked up 1,064 yards on the ground for CU last season as a senior graduate transfer from Virginia Tech.

That void at running back has left an unfamiliar hole that needs filled.

“It’s definitely competitive,” said redshirt sophomore running back Alex Fontenot. “There’s no for sure No. 1 guy. Every year I’ve been here you already knew [so now] you’ve honestly just got to work harder than everybody else, trying to get that spot.”

Uncertainty in the backfield at this point in time shouldn’t warrant a concerned outlook for the foreseeable future, though. As Fontenot alluded to, the open playing field forces guys to elevate their game.

For Fontenot and Bisharat — the only running backs on the roster that saw the field in 2018 — they’ll be challenged by younger players such as Deion Smith and Jarek Broussard, both redshirt freshmen.

“I believe that the younger guys are hungry and eager to go out there and show what they can do,” said running backs coach Darian Hagan. “Especially sitting out freshman year and redshirting — you’re coming from high school where you’re the guy and then get here and don’t play. They’re going to be hungry and push these [older players]. By pushing each other, we’re going to have a room of really good running backs.”

Does this preseason feature the most open playing field in terms of running backs competing for the starting job, in recent memory then?

“Since I’ve been coaching running backs, yes,” Hagan, who’s in his fourth year of as CU’s running backs coach said. “A good thing to happen is to have a bunch of guys that you have confidence in that you can play anytime and not have to worry.”

He was impressive on special teams last year for the Buffaloes, leading the team with eight tackles, three of which were tackles inside the 20-yard line, also a team-high.

Bisharat was one of only two Buffs in 2018 (along with redshirt junior defensive back Derrion Rakestraw) to force a fumble on special teams. Overall, Bisharat earned 29 points on CU’s stat sheet last season via his special teams work.

“[Coming from a special teams background] makes you hungry,” Hagan said. “It makes you appreciate the opportunities that you’re given. For a guy like Beau…other guys that have been in front of him were older and looking more polished. Now, it’s his turn and it’s up to him to keep these other guys from chasing him down.”

For Bisharat, who used the phrase “dirty work” as a job description for those on special teams, a change of culture in the backfield that Tucker has presided over has made things easier for him.

“This offense is a lot different from what we’ve had in the past,” he said. “It’s more long, downhill power running which is more my style.”

Bisharat also indicated a stronger sense of clarity regarding run plays in Tucker’s offense than in his predecessor, Mike MacIntyre’s.

“I felt like there was never actually a hole were the run was supposed to hit,” he said. “It was more of get the ball, look around, see what’s open and you take it. Here’s it’s more down [a specific] hole. We’re…going downhill towards the line of scrimmage instead of on the side of the quarterback taking a zone read.”

“Running back-wise, it’s way easier to learn and pick up [than in years past],” he said. “The last playbook, I didn’t even have it all down in the two years I was here. This one I have 95 percent of it down already. It’s just [simpler].”

Simplicity and having guys on the same page will be necessary keys to success for Tucker’s ground game, as whoever is named the “No. 1 guy,” as Fontenot labeled it, will be the most inexperienced tailback starting — a truth, not an insult — for Colorado in over half a decade.

“It’s a credit to the players, first and foremost that they’ve really taken the time to learn the playbook,” Tucker said. “Our coaches have done an outstanding job installing the plays [and] our schemes in a progression where the players can lean step A, step B and step C and so on…when you’re teaching in progression it allows the players to pick [things] up quicker. I think that’s what we’ve done.”

“There’s nothing set in stone. No one has a position; we have a rep chart, not necessarily a depth chart [and] guys will move up and move down based upon production.”

Starting this Friday, the Buffs will have 10 remaining spring practices, including the annual spring football scrimmage, which is set for Saturday, April 27 at 12 p.m MST at Folsom Field. The game is free to the public and will be televised live on the Pac-12 Network.

Buffs fall flat for third week in a row,...