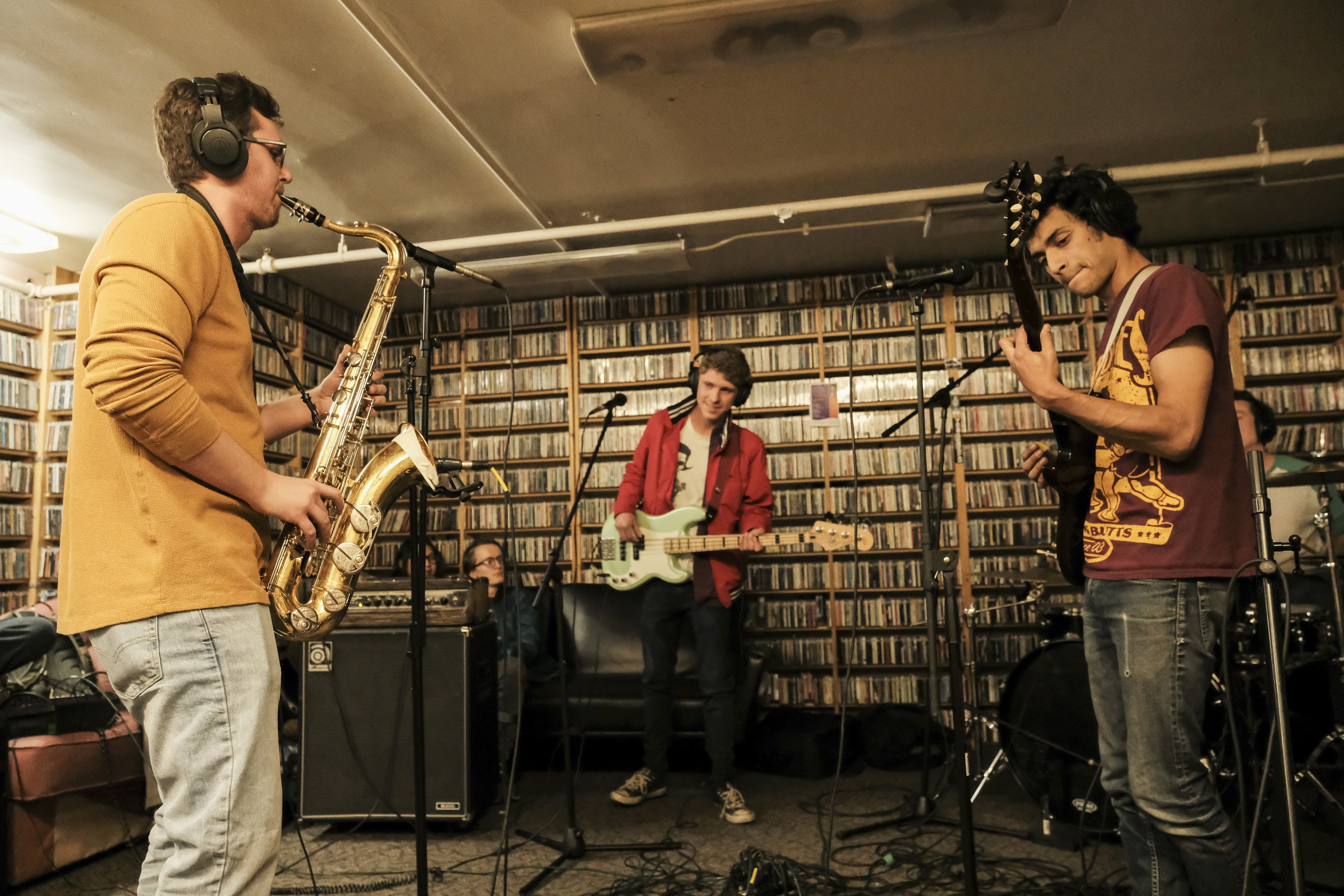 On Friday, March 8, the crowd at the Local Shakedown event in the Radio 1190 studio was treated to a performance by the cool and captivating Aurora-based band, Tonguebyte.

The four-piece is made up of Jacob Maestas (guitar/vocals), Ben Eberle (bass/backing vocals), Kahner Muhlithaler (drums) and Bo Brooks (saxophone). Holding a casual swagger dressed in tees and denim, they almost resemble a group of school friends about to jam in someone’s garage. But their sound is anything but elementary.

Summed up by an audience member as “garage ska punk,” Tonguebyte brings a blend of different genres, harmonies and rhythms to create a musically stimulating, unique and enjoyable show.

From the beginning of the performance, the band’s casual and laid-back vibe is evident when the lead singer states, “I wanna dedicate this song to my mom, my dog and my dad”. Maestas and Eberle “chat” with one another throughout their performance, at one point asking, “Is that what we’re playing next?” They even complimented each other throughout their set, almost appearing surprised at their own musical ability.

The band listed The Smiths and Street Light Manifesto as some of their influences, though I would argue that their sound also resonates somewhat with the style and songs of bands like The Cure and Madness.

The show commenced with “Jade”, a song that showcased the band’s ska influence. After some vibrant songs and quips to the audience, they ended their set with “C’est La Vie”, a short and spontaneous song that is distinguished by a chorus of a long pause and the lead singer slurring his words.

With that came an end to Tonguebyte’s eight-song set. The band made the most of their time by squeezing in as much music as possible, seeming to enjoy every second of it.

One of the elements that stood out was the tight vocal harmonies provided by Maestas and Eberle — their voices echoed in tuneful unison throughout many of the songs. The bass guitar was another element which stood out, often seeming more prominent in the riffs than the electric guitar, aided by Eberle’s adept playing. It provided a complex and deep layer which complimented the high register of the lead singer. Held together by the slick beats of Muhlithaler’s drums and with the refreshing addition of Brooks’ saxophone, every musician truly held their own in this performance.

My only criticism would be that for me at least, the saxophone could have been more prominent. As such a distinctive instrument and with the skillful playing, it would have been a treat to have heard more sax within the songs and the performance as a whole.

Overall, Tonguebyte seems to have a strong grasp of the music they play and of their audience, with focused and understated style.

Described by one member of the audience as “the best show I’ve seen down here,” this was a notable performance for sure. Their manipulation of different genres, rhythms, harmonies and sounds paired with their nonchalant attitude that could potentially be viewed as a casual arrogance and could be seen as risky.

As the band themselves informed us before playing their final song, “life is about risks”, this is one that has certainly paid off.

Local Shakedown features local bands in the Radio 1190 Studio on Fridays several times a month. For more information, visit Radio 1190 in the basement of the UMC or visit the station’s website.