Local businesses concerned about proposed hotel construction on the Hill 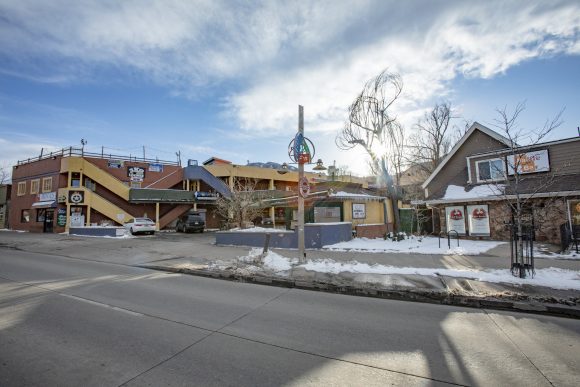 Parallel to the University of Colorado Boulder stands a two-story complex, home to several small businesses that have long catered to the Boulder community. The future of these businesses is now uncertain as a planned hotel may force many to leave.

The hotel was proposed in 2015 in response to the Boulder City Council’s attempts to achieve “district vitality” for University Hill, which is home to many college students and student-oriented establishments. The project faces a “go/no go” from council members to decide whether or not construction will begin.

“Cleaning up” the Hill

The CU Independent spoke with Sarah Wiebenson, the Hill community development coordinator for the City of Boulder, about why the council felt the need for a new hotel.

For Wiebenson, the hotel would serve as an “anchor” used to turn the Hill into a sought-after destination, not just for those in the immediate neighborhood. According to Wiebenson, other locations such as the Fox Theatre and The Sink restaurant do not have a “critical mass usage.”

“We’d also be cleaning up some of the more run-down portions of the Hill … improving appearance and making people feel safer,” Wiebenson said.

There are also plans to build a parking garage underneath the hotel in order to “address the need for a parking solution on the Hill.”

“The hotel itself is different from your typical retailers,” Wiebenson said. “They generate their own foot traffic.”

She said the plan to build underground parking has been scrapped after city council conducted a parking study.

When the hotel was initially envisioned, the City of Boulder asked for a gathering space on the Hill, similar to that of the mall on Pearl Street. The concept included a walkway and plaza space that would connect the intersection of University Avenue and Broadway Street to Pleasant Street.

Without the city’s support for the garage, the Nichols Partnership would need $3 million dollars to make these improvements.

The city believes the hotel will generate between $700,000 and $1 million in new accommodations tax revenue per year. This revenue would then be used to pay back the $3 million that the city would invest into creating the walkway and plaza.

Amidst these changes, the project also faced an apparent setback earlier this year when a family member of one of the three owners of the property on the project site seemed at odds with the other owners.

Three entities own the private-property: The Fowler trust, the St. John family and the St. John and the Dorrell family. During a council meeting on Sept. 4, a Dorrell family member said that he and the family would not support the project moving forward.

Wiebenson explained that the council later found out that the family member owned none of the property himself, something Wiebenson said was an “unfortunate confusion.”

With the possible construction of the hotel, several small businesses in the area face displacement. To combat this, the Nichols Partnership is offering $200,000 in relocation costs to help existing tenants remain on the Hill or nearby.

The city would administer this money by creating criteria for a business to be eligible to claim the money.

“The city is doing a lot right now to help small businesses in Boulder,” Wiebenson said. “Recognizing that it’s an important character of the city, so this is one way we can do that.”

When asked what Wiebenson had heard from students at the University of Colorado Boulder on the matter, she said student participation in council meetings has been “mixed.”

She recalled students who asked if new jobs would be created for them, should the hotel move forward. Sage Hospitality, the operator of the hotel, made a commitment to the city council to create job opportunities for students as part of the hotel.

Wiebenson said the city understood that there are concerns about the loss of current businesses and said the city had been meeting one-on-one with tenants to understand their relocation needs, such as with the aid of companies like white-glove movers.

Responses to these meetings were also described by Wiebenson as a “mixture.” According to Wiebenson, some business owners are planning to retire while others have already made plans to relocate elsewhere in Boulder.

“The city is committed to working with those businesses to help them plan for their relocation,” Wiebenson said. “But it’s too early right now to start actively finding them a new location.”

The city believes that reducing the amount of commercial space in the district will reduce vacancy.

A timeline of the Hill hotel project

Approval of certificate of participation as the recommended funding mechanism

Approval of reimbursement resolution to fund the project’s predevelopment costs

Nestled in a corner of the Hill complex is Dot’s Diner, which has been serving breakfast meals piled with hash browns and fist-sized biscuits since 1998.

For manager Bindu Gurung, the business has been about family.

“My parents put their life savings into this restaurant,” Gurung said. “For them to kick us out, it’s very tragic.”

Gurung says that when she and her family first heard the news about a planned hotel, they were “blindsided.”

Having stayed on the Hill for so long created a sense of community between customers and the diner, said Gurung. Some regulars of the restaurant have even stepped up to help keep the diner from relocating by attending council meetings and keeping family members informed.

“They’ve been like a part of our family,” Gurung said.

She claimed that the developer’s offer to help finance businesses to relocate was actually her father and Dot’s Diner owner, Pew Gurung’s, idea.

“My dad went to the meeting and he was the one that brought up the idea because relocating would be really expensive for us,” Gurung said.

When it comes to a new location, Gurung said they would try to stay on University Hill, but that she was aware of how expensive rent can be in the area. Gurung’s biggest concern with relocation is a possible loss of student customers. However, she assured that the diner caters many regulars who come from nearby towns and is hopeful they can help the business.

Just above the diner is Bento-Ria, a sushi restaurant that was started by Eric Juang three years ago. Within a year of having his business, he found out that he may be displaced by a new hotel.

“I was shocked,” said Juang.

Communication between his business and the city council has been little. He requested to speak with project managers but has not received an answer.

“There’s nothing … nothing, nothing,” Juang said. “Nobody’s sure.”

Relocating, Juan said, would be costly and hard. Renting his space from his landlord and installing the necessary appliances cost nearly $100,000.

“It’s very expensive,” Juang said. “If I have to relocate to another place, same thing. I have to invest a lot of money.”

Juang is also afraid that relocating could affect the restaurant’s prices, as the area it inhabits now is lower rent than many other locations on the Hill or in Boulder. He said that the lower rent allowed him to offer inexpensive yet healthy food to CU students, many of whom he claimed eat less healthy options, like burritos and burgers.

Moving to a new area could see Juang’s rent increase two or three times more than what he is already paying, which would force him to raise his prices, something he does not want to do.

Juang gave the example that a general contractor told him. One square-foot would cost, on average, $100.

Other small businesses in the area share similar sentiments and do not want to leave, according to Juang.

The City of Boulder remains to decide whether it will sell the final area of land needed by the Nichols Partnership to begin construction. The land is a parking lot on Pleasant Street which is owned by the University Hill General Improvement District. Without the purchase of this land, the Nichols Partnership will not have enough space to build the hotel.