Opinion: You shouldn’t have to pay to work 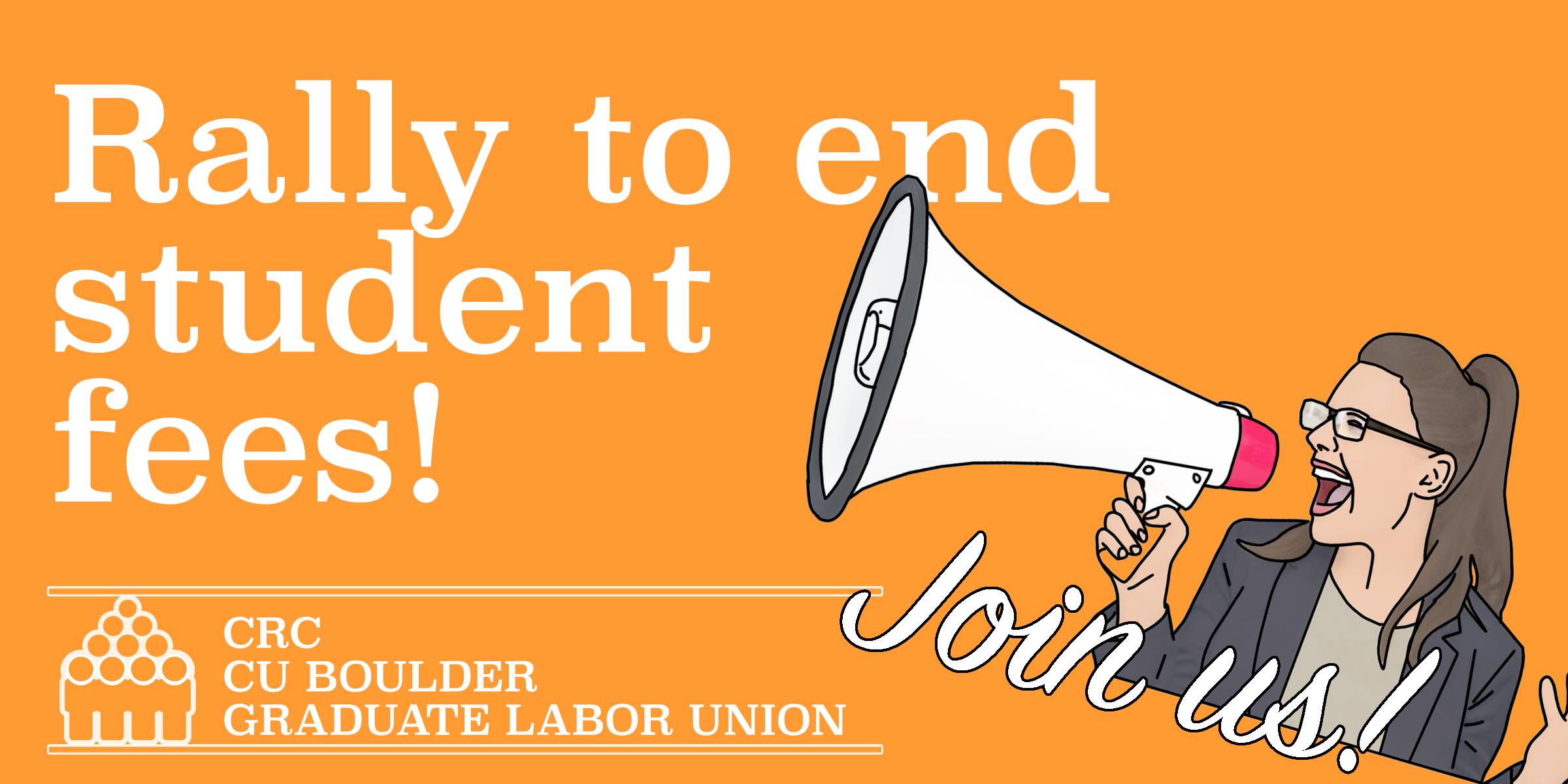 You shouldn’t have to pay to work.

This statement should be obvious to everyone. After all, you’re supposed to be paid for your labor, not paying for the privilege to labor. Unfortunately, the University of Colorado Boulder does not understand this concept.

CU Boulder makes thousands of its workers, be they researchers or instructors, pay to work. And they attempt to justify this because these workers are concurrently graduate students.

On Tuesday, Feb. 5, there will be a walkout and rally at 11 a.m. on Farrand Field to end student fees for graduate workers. A petition to end student fees, organized by CU’s graduate labor union, the Committee on Rights and Compensation, has over 1,400 signatures, including from faculty, community members, undergraduates and even our sitting Representative in Congress, Joe Neguse. Your name should be on there too.

To be clear, we are not saying that the things funded by student fees should be unfunded. Student fees, which can cost close to $2,000 a year in some cases, cover a range of projects, from building new buildings (Buff-shaped pools?!) to funding the health center. They basically cover everything that tuition or the state should pay for, but since raising tuition looks bad they put more and more into fees. (Fast fact: despite being a public university, CU only gets about 4.5 percent of its budget from the state of Colorado. Not cool, Colorado!) CU deserves to be funded, but this money should not come from the already underpaid researchers and instructors.

These mandatory fees that we pay to labor for the university cause significant harm, not just to the individuals who have to pay them, but to you and higher education in general.

Graduate workers are already grossly underpaid, so much so that the Boulder Faculty Assembly unanimously passed a resolution demanding a self-sufficiency wage for graduate workers. These fees add injury to insult. Such strain causes these workers — many of whom are teaching your classes — to need to take second jobs, which leads to less time devoted to your instruction or to CU’s research projects, and in some cases, to not even be able to eat enough to be healthy.

To add insult to injury, grad workers still have to pay taxes on the minimal compensation they do give us before we turn around and give the fee money right back to CU. Paying taxes is fine, but paying taxes on money that you have to pay back to your employer? Not so cool.

This unjust financial situation causes special group harms to less financially secure populations. As our colleagues in Wisconsin put it, “[m]andatory fees are racist and sexist.” This is because women, more specifically Black women, hold a disproportionately larger amount of student debt post-graduation. Forcing graduate workers who are already drowning in debt — and likely less able to pay back that debt due to the racial and gender wage gap — to pay to work for the university is especially unjust.

Furthermore, anything that limits a diverse population of graduate workers limits the diverse population of your instructors, both when they are graduate workers and also once they are full faculty (nearly all university faculty were graduate students at one time). It should be no surprise that diverse instructors matter for students, with regards both to personal performance and to a feeling of belonging, as well as to group level innovation and problem-solving. And even if you only care about your own future financial situation and not the well-being of diverse populations for their own sake, there’s good evidence that diversity in the workplace — which we can encourage by encouraging diversity in higher education — has positive effects on businesses, be it in regards to large-scale issues such as growing GDP or smaller-scale issues such as reducing employee turnover.

While waiving these fees for graduate workers will not be sufficient enough to fix the unjust financial setup of higher education, it’s a necessary step in the right direction.

Even if you agree that student fees cause significant harm to graduate workers specifically, and to higher education and American society more broadly, you might still think that graduate workers should pay these fees. After all, we’re students too, right?

Let’s look at an example. We’ll use me because, well, I know me.

I am employed by the university as a “Graduate Part-Time Instructor,” otherwise known as a GPTI. The “instructor” part is pretty clear: I am fully in charge of teaching my own class. From syllabus development to copious comments on papers, it’s all up to me. The “part-time” part means that I’m supposed to average 20 hours per week of work (but since I actually care about the well-being of my students, I obviously do more). And the “graduate” part refers to the precondition of employment being that I am also a graduate degree-seeking student.

While I am indeed currently working towards my Ph.D., I’m not really taking any classes. All I’m enrolled in are “Doctor’s Thesis” hours, which basically means that I have to keep working on my dissertation. But that’s all self-directed. Yes, my advisor and some other faculty will give helpful comments on paper drafts at times, but it’s not a regular thing. I often go weeks without guidance on my work, not because they are shirking their duties, but because that’s what it is like to be a graduate student at the dissertation stage.

To say that my self-directed work towards a dissertation is enough to make me a student first, as opposed to a worker first, is laughable. But some still try to reject the view that graduate workers should not have to pay to work because they aren’t yet good enough at what they do.

While that’s a silly argument on its face, it often doesn’t apply anyways.

Using me as an example again, I’m working in the philosophy of sport. No one else at CU does philosophy of sport, so there is no one to teach me. Yet over the last few years of self-directed work, I designed a new Philosophy and Sports course (which will still be taught after I graduate, don’t fret!) that the university was happy to advertise as something important for CU. The university explicitly recognizes my expertise in this field and is currently promoting me to the media due to some important sports stuff going on right now. This is not said to boast, but to show that graduate workers are expected to have a high level of expertise in their field.

As an aside, how messed up would it be if CU stood by the claim that the rationale for under-compensating grad workers was that they aren’t competent enough to be better compensated? Remember, these are the workers who are teaching a significant portion of your classes. If that was the university’s rationale, they’d be saying that they were employing incompetent instructors, which, in effect, would be saying that your education doesn’t matter, as long as they can save money. Gross.

There is no justification to make people pay to work.

It would be ridiculous if a lifeguard had to pay for flotation devices while working as a lifeguard. Likewise, it would be ridiculous if a server had to pay for their own dishes while working in a restaurant. Yet, CU requires that many of its workers pay for the infrastructure that is necessary for teaching and research as employees of the university.

Fortunately, that can change, but only if we collectively show our strength. So please, help fight injustice by joining the rally and walkout on Tuesday, Feb. 5. In doing so, you will help make things at CU a little less ridiculous and a little more just.